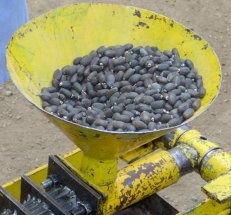 Came across this wonderful news item today in the Hindu Business Line (the ‘Hindu’ is one of the most reputed newspapers in the country and their editorials generally reflect good scholarship) on how the government is now encouraging what are termed as “bio-diesels”. Coming close on the heels of the earlier post on incentivising bio-resource based innovation, this seems timely. I extract from the news:

“THE Minister for Petroleum and Panchayati Raj, Mr Mani Shankar Aiyar, today announced that a high-level committee would be constituted to promote cultivation of jatropha and other plants, which could be used for bio-diesel production in the country.

The Minister also touched upon the recently announced bio-diesel pricing policy, which stipulates that beginning January 2006, public sector oil marketing companies will have to purchase bio-diesel extracted from plants such as jatropha and pongamia for mixing with diesel at Rs 25 a litre. “

Bio-fuels are a fascinating topic and the potential to run engines on bio-fuels goes all the way back to Rudolph Diesel’s successful trials using peanut oil a century ago. Ecoworld states:

“In Africa, India, Asia and the Americas, Jatropha is one of the most promising feedstocks in what is becoming a worldwide biofuel bonanza. Europeans are planting and investing in Jatropha fields in all these places and elsewhere. Such an innovation is an example of how the potential of biofuel is just beginning to be tapped.”

I therefore decided to do some-more digging around and found that this otherwise non-noticeable plant was bringing in a lot of corporate investment. Automobile major, Daimler Chrysler is involved in some sort of a joint project with an Indian institute in this regard:

Another example of corporate investment in this sector is the London based DI Oils which has apparently built a portable Jatropha biodiesel refinery. The Insead Asian innovation website reports:

“Bangalore-based Labland Biotech has tied up with Britain’s DI Oils to commercially exploit and clone the Jatropha plant to produce bio-diesel. Labland’s breakthrough technology achieves tissue culture cloning of Jatropha without any genetic engineering. The process involves a small bit of tissue cultured in an artificial medium, allowing an entire plant to be regenerated and made to proliferate to the required number. Labland has announced plans to produce 10 million Jatropha plants growing in dry tracts. Jatropha can yield about 1,000 barrels of oil per year per square mile. “

This interest in bio-fuels is also driven largely by environmental concerns.

“A 1998 biodiesel lifecycle study, jointly sponsored by the US Department of Energy (USDE) and the US Department of Agriculture, concluded that pure B100 biodiesel reduces net CO2 emissions by 100 percent compared to petroleum diesel. With a B20 mix (a 20% bio-diesel solution), the net CO2 emissions are reduced by 20%. Compared with mineral diesel, biodiesel reduces particle emissions (PM) by 30%, carbon monoxide (CO), which affects air quality and human health, by 50%, and sodium monoxide (SOx) by 50%. Unlike mineral diesel, bio-diesel is non-toxic and is biodegradable.”

An EU Directive therefore seeks to increase the proportion of biodiesel in Europe’s transport energy mix.

I was amazed to find that there is even a fully dedicated Jatropha website!! and also a bio-diesel specific online forum.

The Honge (pongamia pinnata), is another interesting plant with potential as a bio-fuel—with an even more interesting history:

“One evening in early 1999, Dr.Udipi Shrinivasa from the Indian Institute of Science, Bangalore was having tea with some locals in Kagganahalli village. He had for some years been investigating various strategies that would sustain continuous economic development of this semi – arid area.

“Oh there is nothing much here,” a villager was saying. “No river, no wells, no electricity; just hundreds of Honge trees and tonnes of seeds. Not much use now. Our grandparents used the uneatable oil for lamps!”
Dr.Shrinivasa perked up! Useless? If it can burn in lamps, it can surely run diesel engines. After all Rudolf Diesel used peanut oil to run the first ever diesel engine.

Back in the Institute, he quickly extracted some oil, poured it into an engine and started it. Of course it ran! And ran well too.
“It was a sobering moment,” he says. “Here we were,- all scientists- looking at technical solutions like windmills, gasifiers, solar panels and methane generators for rural India, and we had not made the obvious connection with the potential of non-edible oils known from Vedic times as fuels.”

The moral of this story: I would invest this sector, if I were you.

Ps: Of course, I tried to look for patents covering Jatropha and came across some USPTO patents that make a mention of this, including one that mentions a therapeutic application. Surprisingly there were none that cited a bio-fuel sort of utility (perhaps I’ve read the patents wrong and I need to look more closely). I wonder why? Did the scientists who first discovered this fascinating use miss the boat (quite likely if they are Indian scientists, as made evident a year or two back in a notorious IISC (Indian Institute of Science) incident, where the scientist published an article concerning a real technical breakthrough and realised much later that this publication foreclosed any chances of patenting the invention).