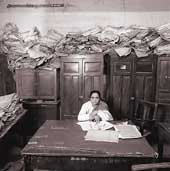 A good friend of mine, Syed Saif Mahmood (senior partner at Amicus Juris, New Delhi) wrote to inform me of a PIL (public interest litigation) that he filed to ensure that the scary prospect in the title (A bureaucratic babu as IP chief!!) does not translate to reality.

This reminds me of another instance where the government wanted to appoint a bureacurat to head the competition commission. The Supreme Court came down heavily on the governments proposal and suggested that a judge head the Commission. Owing to this appointment issue, the new competition regime that India introduced to replace the outdated MRTP (Monopolies and Restrictive Trade Practices Act) never came into force.

For those familiar with India’s bureacrats, you will appreciate that these “babus” are shuffled around between departments at an alarming rate–so much so that if the govt has its way with appointing a bureaucrat to head India’s patent and trademark office, one is faced with the daunting prospect of a “babu” with extensive experience in family planning second guessing whether Novartis’s glivec ‘mailbox’ application amounts to no more than a ‘mere discovery of a new form of a known substance which does not result in the enhancement of the known efficacy of that substance’ (did that sound techical and complicated enough??).

For all you Indian IP aficionados, we have a lot to thank Saif for (watch out for this dynamic lawyer who is on his way to becoming one of India’s top litigators). Saif very kindly provided the below note on the case.

Taking cognizance of a Public Interest Litigation petition moved by the Intellectual Property Attorneys’ Association of India, a Division Bench of the High Court of Delhi has directed that appointment, if any, made by the Government of India to the post of the Controller General of Patents, Designs and Trade Marks, shall remain subject to the decision of the Court.

In a brazen attempt to acquire bureaucratic control over a highly technical-cum-quasi judicial statutory authority, the Government of India arbitrarily rescinded its rules relating to the recruitment of the Controller General of Patents, Designs and Trade Marks and began the process of appointing a bureaucrat to the said post.

Till recently, the Government of India had prescribed technical and legal qualifications for the post of the Controller General which were consonant to the specialized statutory duties attached to the said post. However, by a notification dated November 10, 2005 the Government has, without framing any fresh rules, rescinded its earlier rules prescribing the said technical qualifications, leaving it open to itself to arbitrarily appoint any person of its choice to this highly technical position. This prompted the Intellectual Property Attorneys’ Association to move the High Court of Delhi for setting aside the rescission notification and seeking directions to the Government of India not to appoint a Controller General who does not possess technical and legal qualifications consonant with the duties attached to the post.

The Petitioner Association argued that the appointment of a generalist or a bureaucrat without the requisite knowledge and experience of Intellectual Property or law as Controller General will frustrate the statutory mandate of the aforesaid Intellectual Property enactments and will, indeed, be detrimental to the protection of Intellectual Property rights of the people at large. Besides, such governmental acts also militate against India’s binding and solemn International commitments to the World Trade Organization (WTO) under the Agreement on Trade Related aspects of Intellectual Property Rights (TRIPS). The Association also impressed upon the Bench that, on elementary canons of settled Administrative law, rescission of Recruitment Rules for a highly technical and specialized post without framing fresh Rules, is per se, arbitrary, capricious and irrational.

The High Court has directed the Secretary, Department of Industrial Policy and Promotion in the Union Ministry of Commerce and Industry to show cause as to why the Petition be not allowed further directing that till such time appointment of the Controller General shall remain subject to the orders in this Petition.