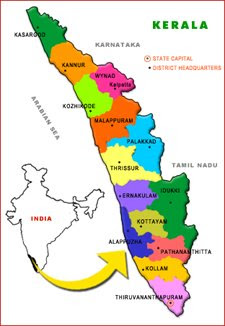 Readers will recall Aysha’s earlier post on this issue here. Spicy IP would like to thank Dr. Gopakumar G. Nair for passing on the following information to us.

The lush green State of Kerala plans to officially released its IPR Policy in the presence of the Minister for law & Parliamentary Affairs, Shri. M. Vijayakumar, Chief Minister Shri. V.S. Achuthanandan and other distinguished guests tomorrow. For those of you interested, the function will be held at the Mascot Hotel, Thiruvananthapuram, starting 2:30pm.

We reproduce here the official text of the IPR Policy Objectives for the benefit of our readers:

State proposes to commit all traditional knowledge, including traditional medicines, the practice of which sustains livelihoods of many, to the realm of “Knowledge Commons” and not to the “Public Domain”. While the Policy envisages creating property rights on traditional knowledge, all the right holders will be deemed to be holding their rights under an obligation that they shall permit others the use of the knowledge in their possession for non-commercial purposes.

SCIP will help any potential patent applicant who asks for its assistance to prepare proper patent applications. It will disseminate knowledge in the state about intellectual property rights.

3) To declare the stand of the Government with regard to the ownership of Intellectual property rights over the outcome of research in state government-funded and state government-aided institutions, especially given the current trend of outsourcing from the west.

SPICY IP supports all government endeavors to protect traditional knowledge and also congratulates the Government of Kerala on its apparent interest in collaborative research with academia (is it just me or does it really sound like a State Bayh-Dole?). However, I am personally a little confused about dedication of all TK to what has been termed as “the realm of ‘Knowledge Commons.'” Does this mean a compulsory “open source” type policy? If yes, and if patents are granted in relation to TK (the possibility of which doesn’t seem to be closed under the policy), will these be subject to an automatic compulsory license? Most importantly, given that intellectual property law including patents, copyrights etc. fall within the Union List, (See Union List, “49. Patents, inventions and designs; copyright; trade-marks and merchandise marks. )”only the central government has the right to legislate on these issues. Doesn’t this mean that the Kerala government policy will be subject to the Indian Patents Act? Doesn’t this mean that the policy statement notwithstanding, the Kerala government may not be able to implement the “compulsory license/Open Source” type policy envisaged for “property rights” related to TK… I would be grateful if anyone out there could tell me what I’m missing here!