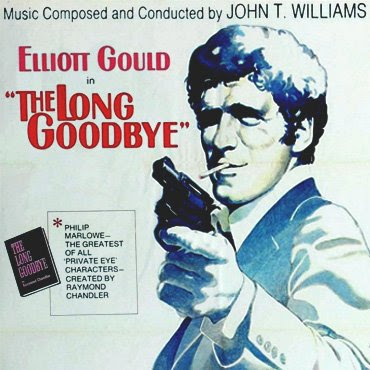 It’s been about one year and six months since Shamnad introduced me to the wonderful world of blogging. Yet again, he did what he has always done as a mentor and very dear friend – teach me new things and give me opportunities to learn. In these past 18 months, I have indeed learned a great deal from this and other blogs. I have felt personal satisfaction and pride as the blog became more and more popular and respected. Today, I think it is safe to say that it is an honour to be associated with Spicy IP. It is with great sadness therefore that I write my last blog as an official Spicy IP blogger. (Sometimes circumstances are such that one cant do all the things one really wants to ☹) I will of course attempt to squeeze in blogs as a “guest” if my posts meet the “Spicy” standards for guest blogs 😉

So here goes: the last in the series of blogs on “Does India need a Bayh-Dole?” (I confess – I still haven’t found a satisfactory answer to this but I hope the following helps others reach one). As far as we know and have stated in this space before, no background studies seem to have been conducted prior to formulating the Bill. I decided therefore to do my own snooping around and uncovered some interesting numbers in the process.

Today’s analysis relates to the definition of “Recipient” under clause 2(9) read with clause 2(2) (defining ‘funding agreement’) and 2(1) (defining ‘fund’) of the Public Funded R&D Bill (hereinafter, “the draft Bill”) In an attempt to study the possible impact of the draft Bill on public funded R&D in India, (and see exactly who it would make accountable), I started studying the “Public Funds” allocated for R&D in India and the manner in which these funds are allocated. But first, lets look at the relevant definitions under the Bill (reproduce here for convenience):

2. In this Act, unless the context otherwise requires

(1) “Fund” shall mean & include all monetary resources provided by Government to a Recipient(s).

(2) “Funding agreement” means any contract. grant, or cooperative agreement entered into between any Government agency, and any Recipient(s) for the performance of experimental, developmental, or research work f1mdcd in whole or in part by the Government.

(9) “Recipient(s)” means any institution, non-profit organization(s) or any other entity that receives money for research and development under a funding agreement with the Government.

The term ‘funds’ is defined very broadly to “mean and include all monetary resources provided by the government to a Recipient.” However, a “Recipient” is a person that receives government funds under a ‘funding agreement.’ As far as I understand the provisions of the draft Bill, the ‘funding agreement’ needs to be in writing and incorporate the terms of the model funding agreement annexed to the draft Bill as Schedule 1. (See for example, clause 3(1) of the draft Bill that requires that all Recipients accepting grants or funds to sign and ratify a “funding agreement” of the type prescribed under Schedule I.) However, not all public funds for R&D are given under such a written contract. I thought it would be interesting to get an idea of what % of India’s R&D expenditure would get covered by the draft Bill (if it were to be passed in its current form):

The public funding mechanism for R&D in India is very interesting. This is roughly how it works:

First, it’s important to note that over the past 15-20 years, the Indian government has been spending about 0.8% of India’s GDP for R&D (yup, that all – 0.8%! See R&D Statistics 2004-2005, NSTMIS (Chapter 1, page 6).
India’s S&T Policy 2003 talked about increasing this to 2% by the end of the 10th plan i.e. by 2007, but I am not sure what the current status of that plan is). The planning commission of India decides the manner in which this 0.8% is to be divided up between various government departments engaged in R&D the biggest chunks go to defense, space, atomic energy and agricultural R&D. (See the distribution for the current year here).

Once this 0.8% (of the GDP) is divided among various departments, each department sets aside a part of these funds for what are known as “extramural R&D projects.” Various government departments such as the Department of Science and Technology (DST), the Department of Biotechnology (DBT) and CSIR formulate projects/schemes under which entities engaged in R&D (they can be private entities, public institutions, universities or a mix of these) can submit proposals to “win” these funds. Peers competitively evaluate the proposals and meritorious proposals are awarded the extramural funds (either in the form of a grant or a loan). Each government department (or government funding agency as they are referred to in the draft Bill) allocates extramural R&D funds under pre-decided terms and conditions (We discussed some of these in the previous posts here)

Given that the draft Bill seems to cover only those funds which are received under a written ‘funding agreement,’ it seems that the only funds that will be considered “public funds” for the purposes of the Bill will be funds received under extramural projects. (I am pretty sure that the planning commission does not make the various government departments sigh a ‘funding agreement’ at the time of disbursal of funds.)

If the above is true, the next logical question is: “what % of the funds given by the planning commission to various government departments (who then become “funding agencies” under the draft Bill) is given out as extramural R&D funds.” This I think might give us a good idea of the % of the total annual R&D expenditure of the government that would be impacted by the Indian Bayh-Dole. (I do hope I am missing something here… if someone could point this out to me, I would be grateful)

In absolute terms, the amount of money being given out in the form of extramural R&D funds has been rising steadily. (See Fig. below). 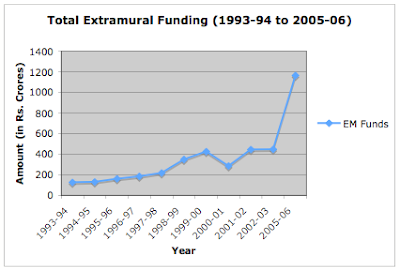 However, when looked at in terms of %, for the years for which data was readily available, there appear to have been no major changes until recently. (See table below). (Note: Amounts in the table are in Rs. Crores)

Furthermore, different funding agencies give out different % of their respective budgets to extramural projects. See graph below: 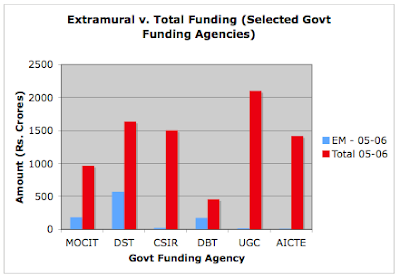 This brings me back to the first post in this series – DST, which gives out the maximum amount of funds for extramural R&D, also has the most liberal terms for awarding these grants/loans (terms that already incorporate many of the principles of the Bayh-Dole). On the other hand, the CSIR, which has more restrictive terms for extramural funding, (but receives a large chunk of the public money reserved for R&D), gives out
All in all, it appears that the Public Funded R&D Bill would cover not much more than 4% of the 0.8% of the GDP given to R&D. Furthermore, it must be noted that even without a Bayh-Dole legislation, CSIR has been bagging the largest number of patents (Indian and foreign), when compared to any other institution or entity within India (including private companies) and has licensed out about 5.7% of its patents (according to Dr. SK Brahmachari, DG CSIR, who was kind enough to share these figures with me, this is better than the world average.)

In the light of the above figures (which I hope will provoke further investigations by those of our readers who are economists and therefore have a better head for number than I do!), I think the government might like to do a cost-benefit analysis before presenting the Bill to the Parliament. Undoubtedly, having a uniform law for all extramural R&D would help bring in uniformity and predictability (as Shamnad rightly pointed out in his article). It would also push the institutions/entities that do get the extramural funds to create IP Management Cells, educate themselves about IPRs and therefore increase general public awareness about intellectual property rights. I do not therefore say that the Bill would be a complete waste. However, in a country which still has limited resources, it is necessary also to see (a) whether the time is right for India to introduce a Bayh-Dole style legislation or whether more attention must first be given to increasing R&D funding, improving general awareness about IP and innovation and most importantly, improving the R&D ethos in the country (another bit of my research in this regard shows that India has a long way to go to make a mark in the international R&D community. See Larsen, Peder Olesen et. al., “Scientific Output and Impact: Relative Positions of China, Europe, India, Japan and the USA, 7 (May 2008) Paper presented at the Fourth International Conference on Webometrics, Infometrics and Scientometrics & Ninth COLLNET Meeting.) (b) Whether India has the capital and infrastructural capabilities to monitor the functioning of the draft bill the way the functioning of the Bayh-Dole has been monitored in the US; and (c) If yes, how the money invested in establishing and maintaining the necessary machinery to implement the Draft Bill can yield maximum returns for the country.

The questions are endless – at the end of the day, I have learned (in the short span of my life), that everything works out just fine… but with the right effort at the right time from public spirited individuals and entities, things can work out much better than just “fine.” To make things better is Spicy IP’s endeavor. I intend to continue to contribute to such endeavors in whatever way possible. On behalf of Spicy IP, I invite everyone reading this space to also jump in, participate, and enjoy the “spice”.

Sources for further research:
Budget of India Website (For those of you interested in studying the R&D budget over the years more closely)
Nanopolitan (I had a chance to talk to Abi – the founder of Nanopolitan and scientist at the Indian Institute of Science (IISc), Bangalore)
National Science & Technology Management Information System (NSTMIS)