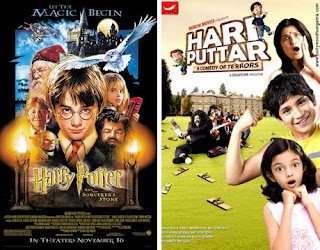 The movie reviews of ‘Hari Puttar’ are still flowing in and trust me they aren’t very flattering towards the movie. CNN-IBN’s Masand apparently couldn’t even sit through the first half because it was that bad. Another review from buzz18.com ran the title of the review as ‘Hari Puttar is such crap’.  The Indian Express was of the opinion that the “script which doesn’t know the meaning of sense, and so full of holes that several large-size trucks can drive right through.” However they also rightly pointed out that the movie was targeted at 6 year olds who weren’t really concerned with the finer nuances of film-making. The Times of India, whose sister concern Mirchi Movies produced the movie, was the only national paper which gave Hari Puttar a flattering review. The ToI ‘lauded’ the movie as ‘cute’.

The million-dollar question however is whether anybody in the audience confused Hari Puttar as a desi version of Harry Potter. The Guardian’s review  seems to suggest that this did indeed happen with a couple of moviegoers who had bought tickets for the movie thinking that it had some connection to the original Harry Potter series.

This brings us back to the Delhi High Court judgment and its summary dismissal of the plaintiff’s argument that the phonetic similarity between Hari Puttar and Harry Potter was confusing the general public. I use the word ‘summary’ because the court has disposed this very central issue of confusion in one paragraph while dwelling on the issue of laches/delay in much more detail. Readers may remember Sumathi’s earlier review of the judgment where she had pointed out that the Delhi High Court was of the opinion that the target audience for Hari Puttar was the cognoscenti and not the illiterates and that the cognoscenti, who were conversant with Harry Potter, could easily distinguish between Harry Potter and Hari Puttar. I’m sure not many of you will disagree with me when I say that this is an odd standard to follow for a movie which was targeted at kids below the age of 13 years. The plaintiffs had asked for the case to be judged from the more conventional standard of “a person of average intelligence and imperfect recollection” however for reasons which are not clear the judgment ‘summarily’ dismissed this argument. It is also quite surprising that the Delhi High Court has not given much weight to the substantial evidence produced by the plaintiffs pointing out to the confusion in the media between Hari Puttar and Harry Potter. The most damning piece of evidence was the fact that a news release by Mirchi Movies itself sought to clarify that the Hari Puttar was not a spoof of Harry Potter.

If the producers themselves sought to clarify that Hari Puttar was not a spoof of Harry Potter then I would think that this is more than ample proof of a prima facie case of possible confusion in favour of Warner Bros. Given the fact that the single judge disposed this issue without adequate reasons it would be interesting to see whether Warner Bros. appeals against this decision.