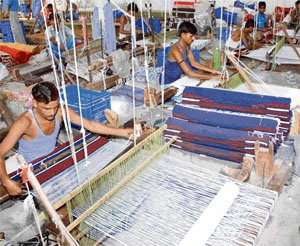 Theatre buffs of Chennai have been in for a treat the last couple of months. An impressive array of thought provoking plays from across the globe, offering deep insights on disturbing social trends has added depth and meaning to the Chennai social scene.

My fond favorite, the’ Song of the Loom’ written by a close friend and craft activist Sabitha Radhakrishna brought home issues close to my heart. The play highlighted the sad plight of the weavers of Kanjeevaram, where the both ‘art and the artisan are being priced out of existence’. Mrinalini Kochus’ Dad could not be closer to the truth.!!!!

On a recent trip to Kanjeevaram (popularly hailed as the Silk Capital of the South) as part of the Craft Council delegation to assess the situation and study the post G.I scenario, we were left grappling with some shocking incidents and details.Manappakkkam the weavers street in Kanjeevaram, until a few years back was home to some of the finest traditional weaves now wore a haunted desolate look. On quizzing many of the weaver families we learnt that most looms had been shut down, with many of them resorting to alternative businesses such as running tea shops and butter biscuit stalls. Many of the master weavers they claimed had been lured by the neighboring industries such as Saint Gobain, Nokia and Hyundai(is it time for some corporate social responsibility) who had poached on the master craftsmen and workers with handsome pay packets and perks quite oblivious to the devastation they were unleashing on a rich Indian legacy. The second generation was just not interested in continuing the weaving tradition with most having migrated to nearby Chennai in pursuit of greener pastures. Dignity of labor and pride in the tradition was clearly absent. Poor infrastructure, lack of government incentives,Chinese counterfeits, public health concerns were cited as common reasons.Every resident family of the weaver community had atleast one member who complained of respiratory, and eye related disorder or skin related ailments)
Questions on the impact of the G.I registration only got us disinterested, woe begone looks, one that my pen can little convey.

A few years back, it took all of the foreign media to give a wake up call to revive the languishing textile and weaving industry of Varanasi.An ancient ‘Indian Craft in Tatters cried the Washington Post and thus caught world attention’. The Craft Revival Trust subsequently undertook several incentives icluding imparting awareness on the G.I rights to address the malaise that dogs the weaver community. The Initiative by the UNCTAD to apply for a G.I is one such that would indeed go a long way in restoring economic health to the artisan community.

The G.I initiative with the Chanderi Craft Cluster by Mr. Mahesh Gulati in conjunction with the Craft activists is another such example where a G.I mark has added the much needed fillip to a dying craft community. A very effective exercise where all the stakeholders where involved to bring about a holistic revival result.

The article by Arun S in the Financial Express exhorts us too look within and not without cause.

The key question to the G.I debate, one that Shamnad has honed in on: is it about working towards the magic numbers and increasing the number count.

Given the above factual reports and encounters, it does not appear so. Any G.I registration would be incomplete without adequate follow through at the grassroots level, carefully implemented by the respective Ministries, policed by vigilant NGOs and marketed by an effective PPP structure.

‘Experts have cautioned against the ‘overdrive’ for GI protection, as they fear that it would lead to the dilution of the concept and the weakening of the rights that it gives.’

‘Although registration safeguards the community rights, prior to registration, much ground work is required to prevent consumer deception and confusion.’ cautions Latha Nair in her article First in Time, First in Right

In view of all the reports that are filtering in, I wish to put forth in summary a list of suggestions that may lend a progressive thrust to the Indian G.I momentum.

My apologies for an unduly long post , but this is one issue that has been simmering and festering within me for awhile .With Shamnad and Kochus’ post leading the way I am but tempted to write it all and to my hearts content.

And last but not least,I wish to thank Mr. James, Mr.Natrajan Registrar( someone who is doing commendable work) of the G.I registry, Mrs .Vijaya Rajan President Craft Council of India and other leading craft activists for providing us the inputs to write on this topic.