share
After everybody in the Indian mainstream media, from the op-ed writer to the cub reporter, has run riot on the Tirupati Laddu news-item, with their own interpretations of whether it’s a GI copyright on offer, or a GI patent, we thought the weekend was a good time to take a breather and bring you that rarity – the “expert” opinion!
Topically, this is a story we have discussed and debated in this space, which those of you interested may wish to refer to. You do know, by now, that the Tirupati Laddu, purportedly originating in the temple town of Andhra Pradesh, has been granted a GI registration.

In this post, we bring to you an after-grant analysis of the case, with a focus on the implications this might have on the evolution of GIs in India in the times to come. To add a dash of spice to the laddu (cardamom or clove? I leave that to you), the blogger’s identity remains anonymous – a ghost, if you will. On my part, I can assure you that the credentials of the ghost are impeccable. and the analysis that follows is well-reasoned. It is for you to decide if the recipe that has been served up is to your liking or not.

‘Tirupati’ – Laddu or the Lord?

One was just about heaving a sigh or relief after the withdrawal of the several geographical indication (GI) applications filed by Reliance Industries Limited, a public Limited company, for ‘Jamnagar’ and ‘Krishna Godawari’ for petrol etc., when the news broke about the registration of ‘Tirupati laddus’ having been granted registration as a GI! (Image from The Hindu)

Considering the potential of any discussions on the famed laddus to hurt the faith of millions in Lord Venkateshwara, let me start this post with an earnest caveat – I mean no disrespect to the Lord or his devotees by writing this. My only purpose is to analyse whether this registration was granted in accordance with the provisions of the Geographical Indications of Goods (Registration and Protection) Act, 1999 [‘the Act’ for brevity]. It is also my purpose here to examine whether the applicant in this case had other options than a GI registration to protect the famous laddus and the devotees of the Lord from fakes being sold. Bearing in mind that the laddus are prasadam from the Lord, I request the readers, most of whom I believe are lawyers, to dissociate the concerns raised below from their loyalty to the Lord and read it with a dispassionate mind.

Was the GI registration for Tirupati Laddu as per the law?

The applicant which registered the laddus under the Act is the Tirumala Tirupati Devasthanam (TTD), a trust which is managing the administration of the temple. TTD sells these Laddus for a price to the devotees who visit the temple. A Wikipedia report states that in the year 2007, these laddus fetched a sum of $10 million! Whether the Wikipedia report is to be believed or not, the statement of case filed by TTD along with the GI application which was advertised in the Geographical Indication Journal No 28 at page 38 states that the cost of a small laddu is Rs.25 and a big laddu is Rs. 100 and that on an average, 70,000 devotees visit the temple every day (at page 60). So TTD could be making a profit of anything between Rs. 17,50,000 to 70,00,000 in one day by selling these laddus!

Being a product touted as a GI, I innocently and momentarily wondered if all that money was going to the development and betterment of the producers of the laddu, who had a collective right in the name “Tirupati laddu”, but I was sadly mistaken! Unlike Colombian coffee or Darjeeling tea, there are no “producers” who make these laddus and bring it to the temple to be distributed and eventually get a share of the colossal profits that TTD is making. On the contrary, TTD is the producer. All that money earned by TTD from the sale of the laddus presumably goes to TTD’s kitty because the statement of case filed clearly demonstrates that TTD is the sole beneficiary. The laddus are made by workers of the temple as well as contract workers hired by TTD. There is no mention of any other beneficiary in the application except TTD.

While I do not dispute the unique taste of the laddus, derived apparently from divine intervention (see the statement of case which states that, “The laddu gets its reputation not from its taste alone but from its sanctity”), as a concerned member of the IP community, I wish to know the implications of registering goods produced by private entities as GIs. This issue assumes significance when considered in the light that GIs are collective community rights protecting a group of producers [see Section 11 (1) of the Act read with Rules 32(5) and 32(6)(a)&(f)]. If private rights such as the one in this case were permitted to be registered under the Act, would it not militate against the very spirit of GI protection which is aimed at protecting, preserving and promoting collective community rights as opposed to private monopoly rights?

Permitting such registrations would lead to a situation where any company or private enterprise carrying on a monopolistic business can get a GI for that name as long as they demonstrate that they are the only ones who manufacture or produce these goods and that these goods have unique features. For instance, those who have relished the famous Shrewsbury biscuits from Kayani Bakery in Pune swear by the said biscuit. Kayani Bakery has a board outside which states that they have no branches. Tomorrow, if Kayani Bakery finds fakes being sold as Shrewbury biscuits, should they register it as a GI to fight the fakes? This was certainly not the intention behind the GI Act. On the contrary, if several producers of a biscuit called Shrewberry manufactured in Pune which followed a uniform recipe and tasted exactly the same irrespective of who produced it, it would be a fit case for staking a claim for GI rights in Shrewberry biscuits.

Did TTD have options other than GI? 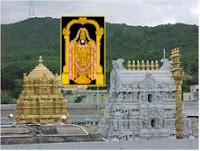 Yet another issue I am compelled to raise is what would happen if the numerous replica Tirupati temples in India and around the world choose to make similar laddus (I am assuming they do not currently do so in view of TTD’s statement of case that these laddus are not manufactured anywhere else in the world)? Could the TTD say that the method of production coupled with the divine intervention by the Lord that gives the unique taste to the laddus can happen only in the real Tirupati and not in the replicas? I am confident that the Lord would have no qualms about pleasing all those devotees who have unwavering faith in his powers of intervention in the circumstances. To assert otherwise would be to equate the Lord with us, mere mortals! (Image from here)

In my opinion, the TTD failed to consider better alternatives for protection under the Trade Marks Act, 1999 as well as the Consumer Protection Act, 1986. In fact, if the claims of TTD were to be believed, “Tirupati”, the geographical name, has acquired enough secondary meaning to qualify for registration as a trademark in respect of laddus under the Trade Marks Act, 1999.

Lastly, there are several temples in South India which are known for their prasadam offered in the form of payasam (sweet rice porridge made with unrefined sugar, sugar candy etc) and other food stuffs. The famous ‘aravana payasam’ and ‘appam’ from Sabarimala temple, ‘tirumadhuram’ (a mixture of sugar candy, sugar, raisins and ghee), from the Mookambika temple in Mangalore, and the ‘palpayasam’ (sweet porridge made with milk, ghee and rice) from the Sri Krishna temple near Alleppey are just a few examples. These are available only from these temples. While the taste of these delicacies is indeed unique, it is a debatable issue if these qualify as GIs. Seeing how Tirupati laddu made it to the GI register, it will be just a matter of time before these temples get into similar acts. It is significant here to take a look at the objectives for which GIs are protected in other jurisdictions such as Europe whose legislation permit only groups or associations to apply for GIs [See Article 5.1 of EC Regulation 510/2006].

Instances like the Tirupati laddu give rise to a serious concern on the evolving legal regime for protection of GIs in India which is still taking baby steps. While it is only natural to falter in the beginning, it is important not to forget the lessons learnt from the various falls. If not, it would be quite a wobbly growth for this evolving legal regime.