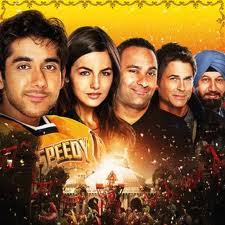 Tania Sarcar our now regular guest blogger has sent us another post on a ‘John Doe’ order passed by the Delhi High Court to protect the Bollywood movie Speedy Singhs.

Yet another John Doe order has been passed by the Delhi High Court, this time for the movie Speedy Singhs, starring Akshay Kumar. The producers of the movie moved the High Court for an injunction in order to pre-empt any copyright infringement.

The film’s producers have moved the HC against a few cable operators and against unknown defendants for a temporary and permanent injunction for any copyright infringement; hence the John Doe order.

The producers of the movie were represented before the Delhi HC by Naik & Naik convinced the Court to pass a ‘John Doe’ order passed against all the prospective defendants which includes unknown persons, “restraining them from in any way displaying, releasing, showing, uploading, downloading, exhibiting, playing, defraying the movie Speedy Singhs, without a proper licence from its producers. The order also restrains those who may wish to release or distribute the film without permission through CD, DVD, Blu-ray, VCD, Cable TV, DTH, internet, MMS, tapes, conditional access system or other media. The order is valid till December 19, 2011.”

‘John Doe Order’, as discussed earlier, is used to describe an injunction sought against a person whose identity is not known at the time of the issuance of the order. It thus enables an IP owner to serve the notice and take action at the same time against anyone who is found to be infringing the copyright of the movie. The order does not specify any one defendant in particular. It is meant for anyone who is likely to infringe the copyrights of a product. The name ‘John Doe’ is used as a placeholder in a legal action or case for any person whose true identity is unknown. This type of an order is quite rare in Indian courts and are mostly seen in the American and Canadian legal practice. However, recently the Delhi HC passed two other John Doe orders- in July 2011; the movie Singham and in August 2011, for the movie Bodyguard.

Thus, John Doe orders are becoming quite common in the film industry and seem an effective way to curb piracy. It however poses some difficulty for ISPs restricting them from file sharing.