IIPRD, in support of Khurana and Khurana, Sughrue Mion, and other Supporting Partners, is planning to conduct a National Level Patent DraftingCompetition (NPDC) with the goal of spreading a strong and wide awareness on patent issues whilst also seeking to enable practitioners to understand the quintessential sine qua nons of patent drafting. 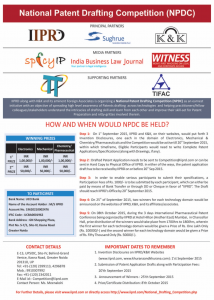   Step 1: On 1’st September 2015, IIPRD and K&K, on their websites (www.iiprd.com and www.khuranaandkhurana.com), would put forth Three Invention Disclosures (describing three Inventions), one each in the domain of Electronics/ Hi-Tech, Mechanical, and Chemistry/Pharmaceuticals. ThePatent Drafing Competition would be active till 20’th September 2015, within which timeframe, Eligible Participants would need to write CompletePatent Applications/Specifications (along with Drawings, if applicable) complying with Indian Patent Act for a technical domain of their choice (1Patent Application per Participant).

  Step 2: Drafted Patent Application can be sent to Competition@iiprd.com or can be sent in Hard Copy to Physical Office of IIPRD, which is at “E-13, UPSIDC Site IV, Behind Grand Venice, Greater Noida”. In either of the ways, the patent application draft has to be received by IIPRD on or before 20’th September 2015.