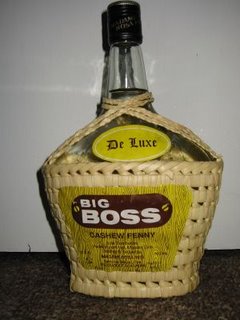 In its bid to try for a patent for Goan Cashew Fenni, a unique local brew, the State Government has set up study committees under the nodal agency — Patent Facilitation Centre — to unearth historical information on fenni to establish its Geographical Indicators (GI).
Joint Secretary and Director of Department of Science, Technology and Environment (STE) N.P.S. Varde, who heads the nodal agency, told The Hindu that the process of getting the patent is elaborate. Nevertheless, the State Government has made a beginning by forming a State-level advisory committee headed by Development Commissioner J.K. Dadu to collect information and document GI of Fenni, he said.

Fenny lovers will love this move to ensure that they get their moneys worth when they taste this powerful spirit the next time. If a link is established between Goa and Fenny and the fact that its taste derives in some way from Goa, this shouldn’t be much of a problem.