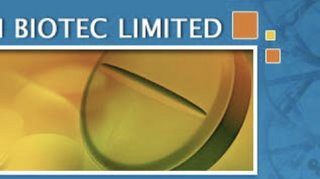 It appears that the government is looking at more ways to incentivise drug discovery and to encourage patenting in this regard. A news item (http://www.indiaenews.com/business/20061125/30030.htm) states:

“India will soon have a law to provide incentives to scientists and public enterprises in the biotechnology sector for creating patents, Minister of Science and Technology Kapil Sibal said Saturday.

‘We are bringing in a legislation in the budget session of parliament that will enable scientists to receive one-third of the value of the patent created for drug discovery. Of the balance, one-third (33 percent) will go back to the project and the remaining to the public enterprise funding the project,’ Sibal said at a function here.

After inaugurating the drug discovery facility of Jubilant Organsys Ltd, the minister told reporters that the draft of the legislation was ready and would be hosted on the ministry’s website soon for public comments.”

As is normally the case with the new breed of “IP Journalism”, a lot is left to the imagination. Thus for example, although the key theme seems to be incentivising “drug discovery” the news item states: “India will soon have a law to provide incentives to scientists and public enterprises in the biotechnology sector for creating patents”. No doubt biotechnology is a hugely attractive area of drug research (biopharmaceuticals), but then creating drugs via the traditional chemistry route continues to remain the main focus of the pharma industry.

Secondly, it is not clear whether this proposed legislation will only cover “publicly funded research” (although this would be the more logical reading). Why should the government interfere with privately funded research. Or is it that even in such a private context, 33% of the proceeds would have to go to an employee. Perhaps the Indian government is conscious of the recent Japanese court rulings doling out huge compensation packages to employees responsible for brilliant inventions that made their employers rich (see the Blue Diode case in particular).

Yet another IP legislation–surely, that can’t be a bad thing!! Lets wait and see what the draft looks like. Till then, we have no option than to rely on inside sources and journalists that continue to tax our imagination.