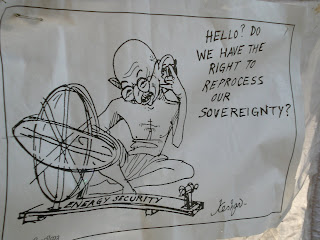 Latha Jishnu of the Business World has this wonderful piece on the mysterious “Bayh Dole” style bill. For those wishing to access a copy of this proposed legislation, please see here.

“What we need is some informed debate on what is India’s best interest at this particular stage instead of going for a wholesale import of an American system that could prove ineffectual. Otherwise, we could be headed for a nuclear deal in our science establishment — corrosive, divisive and ultimately ineffective.”

I reproduce her article below:

PATENTLY ABSURD
The simmering suspicions over a proposed bill on intellectual property rights (IPR) that would give government-funded universities and research institutions the right to patent innovations has spilled out into the open once again with a popular blog on IPR publishing the text of the secretive bill.

Spicy IP, run by Shamnad Basheer, research associate at the Oxford Intellectual Property Research Centre, has posted what it claims is the text of the Public Funded Research and Development (Protection, Utilisation and Regulation of Intellectual Property) Bill, 2007. No one here calls it by this long-winded name; in any discussion it is just referred to as India’s Bayh-Dole Act (BDA) because it is based on the American law of that name. Introduced in the US in 1980, that bit of legislation gave universities the IPR over results of federally-funded research. Academia was encouraged to commercialise its innovations through licensing, etc. The Economist gushed that it was “possibly the most inspired piece of legislation to be enacted in America over the past half-century,” inspiring several other countries to follow suit. China passed its own BDA towards the end of 2007, while India is among a group of developing countries that is hoping to make such a law the Open Sesame to an explosion of innovation.

The Bill put out by the blog confirms much of what has been disclosed in bits and driblets. But it is typical of the government that it has chosen to keep the details of the proposed law under wraps, leaving far too much to conjecture — and quite often to misconception for want of facts. Prepared by the Ministry of Science and Technology, the Bill has been doing the rounds of the various ministries and is scheduled to be tabled in Parliament soon, according to the grapevine.

In essence the Bill aims to make our largely cocooned universities more responsive to the marketplace. This in itself may not be a bad thing but with a large body of scientists up in arms over the proposed law we need to understand why. Opinion is sharply divided even in the US on the effectiveness of the BDA. To its champions, it was the trigger for the technology explosion in the US in the 1980s that made it the world’s leading innovator. The critics, though, say it is too simplistic an assumption because there is no data to back such claims and that the innovative outburst would have occurred in any case.

The most illuminating analysis comes in Ivory Tower and Industrial Innovation: University-Industry Technology Transfer before and after the Bayh-Dole Act written by David C. Mowery, Richard R. Nelson, Bhaven N. Sampat, and Arvids A. Ziedonis. The authors say that the tradition of university-industry linkage in the US was established long before the BDA; what the law did primarily was to harmonise federal policy rather than introduce any revolutionary change although it did provide a further impetus to academic patenting and a huge rise in the number of academic institutions involved in patenting and licensing. This, however, had a seamy side to it: the rise in patenting by universities during the 1980s was accompanied by a decrease in the quality of patents, says the book based on a survey.

For India, the circumstances and the concerns are vastly different. For one, our universities have a poor R&D base and although the Bill promises that researchers will get a chunk of the monetary benefits (30 per cent net of expenses on IP protection) accruing from any patents, it is doubtful how such a law alone will help to kick start an environment that is geared to innovation. Besides, the patenting infrastructure in the country and more so in academia is so woeful that law will prove quite ineffective.

While some critics have problems with some key provisions of the Bill, such as the 90-day limit given to government-funded universities and non-profit research institution to declare their inventions, there are many scientists who are totally opposed to the Bill. One such is Dinesh Abrol, senior scientist with the National Institute of Science, Technology and Development Studies (Nistads) of Delhi who says universities must be allowed to maintain their mission of diffusing knowledge independent of state and market and without subordinating them to corporate interests.

Technology transfers can and do happen through many channels, and the diverse methods now in use would be restricted by the new law, says Abrol. Nistads is one of the one of the 38 institutes grouped under the Council of Scientific and Industrial Research (CSIR) whose chief, Samir Brahmachari, has been advocating the open source system (reported several times in this column) of collaborative, incentive-based research.

What we need is some informed debate on what is India’s best interest at this particular stage instead of going for a wholesale import of an American system that could prove ineffectual. Otherwise, we could be headed for a nuclear deal in our science establishment — corrosive, divisive and ultimately ineffective.