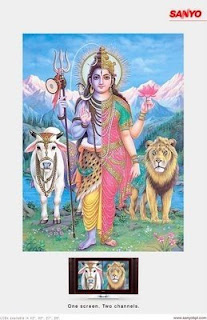 DNA carried an op-ed of mine on the Daichi-Ranbaxy take-over and the implications for the future of IP. I reproduce this article below.

The Ranbaxy Daichi Merger: An Emerging “Ardhnarishwar”* Model in the Pharma Industry?

(* Legend has it that the Hindu God Shiva appeared in a half male-half female form before Brahma, the creator god to demonstrate the concept of duality. This “dual” form of Lord Shiva is referred to as “Ardhnarishwar”)

The above aphorism took a slight beating with the Novartis-Sandoz merger. More recently, with the proposed take-over of Ranbaxy by Japanese multinational Daichi-Sankyo, it has all but died a natural death. Leading one to ask: what implication does the creation of this “ardhnarishwar” like entity have on the future of intellectual property?

In other words, how will this new “duality” of pharmaceutical corporations impact the oft-witnessed hostile battles between innovators and generics?

Less Patent Challenges?
Immediately following news of the proposed take over by Daichi Sankyo, Pfizer and Ranbaxy announced a settlement in relation to a patent challenge over Pfizer’s multibillion dollar and most heavily litigated drug, Lipitor. Although one is not certain of the extent to which the proposed take over speeded up the settlement, one might hazard a guess that with the parent Daichi’s pervasive “innovator” cloak, Ranbaxy’s aggressive patent challenge days may be coming to an end.

The Novartis-Sandoz arrangement bears out the above point: although Sandoz is one of the biggest generic manufacturers, it files relatively much fewer patent challenges than the other generis in the big league, including Ranbaxy.

More R&D and Innovation?
Most analysts have missed the fact that Daichi Sankyo is interested in Ranbaxy for another value proposition. Amongst Indian pharmaceutical companies, Ranbaxy is best suited for serious R&D and innovation, as borne out by two facts:

1. Ranbaxy files more patents than other Indian pharmaceutical companies (in fact, it is the second highest US patent filer from India after CSIR). Ranbaxy’s once a day CIPRO pill (Cipro-OD) for Anthrax, which was licensed to Bayer is often touted as one of the most successful examples of incremental innovation.

2. It is the only generic company to have supported incremental innovation during the days of the much bandied about Mashelkar committee report.

Given India’s reputation as a low cost R&D center, Daichi could cut significant R&D costs by relocating some of its R&D to Ranbaxy labs in India. One may ask: if Ranbaxy had serious notions of becoming an innovator, then could they not have done this on their own. Why did they have to “sell out”? Perhaps the following circumstances might help explain Ranbaxy’s choice:

1. The risk and investment involved in bringing new drugs to the market is colossal. It is therefore not easy for companies like Ranbaxy, which have hitherto been proficient in generic manufacturing to acquire R&D skills for new drug discovery and drum up related investments overnight. The only other sensible alternative to being taken over by an MNC is to enter into partnerships and collaborations with such innovator companies. Thus far, such partnerships have not yielded any notable successes. In fact, the first such partnership between Novo Nordisk and Dr Reddy’s Lab (DRL) for developing an anti diabetic molecule discovered by DRL was a colossal failure, with Novo Nordisk pulling out mid way through the clinical trials. Current collaborations between Ranbaxy and GSK and between Glenmark and Eli Lilly are yet to produce any significant results.

2. Despite Ranbaxy’s focus on R&D and innovation, it could never really walk the talk. Illustratively, in 2003, when Ranbaxy unveiled “Garuda”, its vision document for the future, it forecasted a turnover of $5 billion by 2013, with 40 per cent of the turnover coming from innovator/proprietary products. While it may close in on the USD 5 billion target by 2012, its forecast of 40% revenues from innovator products seems far-fetched. After all, in 2008 (after an efflux of 5 years since it unveiled Garuda), more than 95% of its sales still came from generics.

Bio-generics
The one area which the Ranbaxy-Daichi collaboration can cash in on in a big way is “follow on biologics” i.e. generic versions of biotech drugs. The ball game here is different, as evidenced by the fact that the FDA and US Congress are still struggling with the nature of guidelines that ought to be evolved for approval of such drugs. Most experts acknowledge that follow on biologics are not traditional generics and require significant R&D capabilities. A simple showing of bio-equivalence may not suffice here, as the drugs are very complex. In fact, the first few “follow on biologics” were introduced by innovator companies, and not by traditional generic manufacturers. With Ranbaxy acquiring serious R&D skills via Daichi, Ranbaxy could be a forerunner in the follow on biologics business.

Impact of Patients and Access
So where does all of this leave the patients?

One cannot but help get the feeling that as innovators and generics cosy up together, patients may be at the receiving end. More patent settlements will impact patients’ access to cheap generics. If, on the other hand, such partnerships result in lower R&D costs, we can expect more cheaper priced drugs in the market. Only time will tell whether the creation of such “ardhnarishwar” entities will prove a bane or a boon.

Conclusion: Implications for IP Policy
The “Ranbaxy Daichi” model is here to stay and one can expect more such “Ardhanarishwar” models in the coming years. As to how these hybrid structures go about resolving their inherent schizohprenia remains to be seen. However, there is no gainsaying the fact that such models will significantly impact the IP policies of pharmaceutical corporations. Importantly, this “duality” will make it easier to find common ground and “middle path” solutions between these hitherto warring factions.