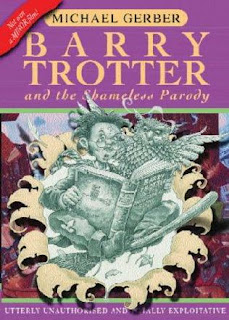 Over the last week or so Sumathi’s incisive posts, on the issue of Warner Bros suing the makers of Hari Puttar for trademark infringement, have had me thinking over some of the issues associated with parodies. Over the years J.K. Rowling’s Harry Potter series has spurned more than its fair share of literary parodies. In fact Wikipedia has a full article dedicated to the various parodies of Harry Potter. The ones that caught my attention were Barry Trotter and The Shameless Parody, Barry Trotter and The Unnecessary Sequel – both of which are based on the characters “Barry Trotter”, “Lon Measly”, and “Ermine Cringer” who attend the “ for Wizardry and Witchcrap”. Although the names of the characters are similar to the original I think the storyline is quite distinct. The other parodies which had me rolling on the floor with laughter were Hairy Potty and the Underwear of Justice and also Hairy Pothead and the Marijuana Stone. Even for a person like me who has not read a single book of the Harry Potter series (yes! Sumathi is not the only one) these parodies definitely appear to be hilarious.

Anyway getting down to the main topic of this post – how did these parodies survive suits for trademark and copyright infringement? It’s simple – the most successful ones have never been sued! Barry Trotter has sold almost 700,000 copies and according to the ‘FAQ yourself’ (get a drift of the parody?!) section on their website – they haven’t yet been sued by the publishers of Harry Potter – Bloomsbury Publishers. Considering the fact that the main cover page, the characters etc. strongly resemble the Harry Potter series it would seem obvious that Barry Trotter should have been sued over and over again.

The only reason that I can think of as to why they haven’t been sued for copyright infringement is the fact that, at least, in the , parodies are usually protected under very strong ‘fair-use’ exceptions. The landmark U.S. Supreme Court in this regard is Campell v. Acuff-Rose Music – where a band had successfully parodied Roy Orbison’s Pretty Women song. That still does not explain why the publishers haven’t sued these Harry Potter parodies for trademark infringement especially given the fact that at first look it is quite easy to confuse Barry Trotter with the original Harry Potter. This brings us to the second question – can parodies be defended against suits for trademark infringement under a free speech defence?

The Free Speech Defence: In the the free speech argument under the First Amendment has been used regularly as a defence against allegations of trademark infringement. In theory this defence is quite powerful given the fact that it pits fundamental rights against commercial interests. In most jurisdictions including the judiciary is extremely protective of fundamental rights, especially the right to free speech and expressions which is enshrined in Article 19(1)(a) of the Indian Constitution. Trademark law imposes a series of restrictions on free speech and expression. Most of these restrictions however are reasonable restrictions which are permissible as per the language of Art. 19(1)(a) because they seek to prevent consumer confusion and promote commerce. Such clear cut distinctions are not possible when a trademark is used with out authorization in cases of editorial criticism or for a parody. For example: presuming that SpicyIP was a registered trademark and one of our enlightened readers were to get so outraged by one of our posts that he writes a scathing review on his blog criticising SpicyIP – can we sue him for trademark infringement or dilution or disparagement? Alternatively what if some one was to create a parody of SpicyIP say ‘NotsoSpicyIP’ (okay bad one!) or maybe draw a cartoon ridiculing all our blog members? In such cases does trademark law allow for a fair use defence keeping in mind our fundamental rights to free speech and expression? Fair criticism and parodies are the foundations of our right to free speech. Artistic works are also covered under such aright. Basically this is the provision of law that saves M.F. Hussain from the mob. It is up to the law of libel and defamation to decide whether any free speech is illegal. At the same time however it is important to protect consumers from getting confused between similar trademarks. The question therefore is what exactly should qualify as a reasonable restriction under Article 19(1)(a) when artistic and business endeavours intersect each other? Where should we draw the balance?

While most of the above judgments proceed on the traditional confusion analysis there have been notable judgments like the case where the free speech defense has been successfully used. At dispute in the case was the defendant’s use of the trademarked name ‘Ginger Rogers’ in the title of a movie ‘Ginger and Fred’. The movie was based on the lives of two dancers who aspire to be like the real life performers – Ginger Rogers and Fred Astaire. In that case the 2nd Circuit held that the Lanham Act “should be construed to apply to artistic works only where the public interest in avoiding consumer confusion outweighs the public interest in free expression. In the context of allegedly misleading titles using a celebrity’s name, that balance will normally not support application of the Act unless the title has no artistic relevance to the underlying work whatsoever, or, if it has some artistic relevance, unless the title explicitly misleads as to the source or the content of the work.”

The above analysis in the case draws an excellent balance between trademark rights and fundamental rights. Such an analysis applies to parodies as well. To be successfully defended a parody must only draw initial reference to the trademark but then divert to create an independent image in the consumers mind. Apart from the initial confusion, the parody must not create any further confusion in the minds of the consumer.

We must not under-estimate the power of a parody, they are a powerful means to convey a message and after all this is a question of our fundamental right to laugh. As one American judgment eloquently put it: Trademark parodies, even when offensive, do convey a message. The message may be simply that business and product images need not always be taken too seriously; a trademark parody reminds us that we are free to laugh at the images and associations linked with the mark. The message also may be a simple form of entertainment conveyed by juxtaposing the irreverent representation of the trademark with the idealized image created by the mark’s owner.

Having said all of the above I doubt whether such a defence can be used in the current Hari Puttar case. It could have been used if the story was based on an Indian parody of the Harry Potter series. However from the promos it seems that the story line of Hari Puttar bares no resemblance to Harry Potter and it is unlikely that they can use the defence of a parody.