We have another breaking news update for you today – this time on the Gandhi-Mont Blanc dispute, which comes via Adam Smith of the World Trademark Review.
The dispute over Mont Blanc’s use of Gandhi’s image has been “almost settled” between the luxury pen maker and the NGO that had filed the writ petition, according to the in-house counsel at Mont Blanc, according to this news report by Adam run today on the magazine website, which can be accessed by subscription here.

The Indian NGO apears to have retreated upon being informed that the international pen brand would be donating a significant amount to charity. The next court appearance will be procedural, essentially confirming the settlement. The WTR reports:

“We have negotiated a settlement with the other side,” confirmed Bharat Dube, senior counsel, intellectual property at Montblanc parent Richemont. When the luxury pen maker told the NGO that it had already planned to donate close to $1 million to charitable causes closely related to Gandhi’s interests, the body backed off. “The matter is before the court now,” added Dube, “simply to confirm the settlement and that we’ll be paying this money to charity.”

You will recall there had been some speculation in the earlier note we had run on the dispute and the lengthy discussion that followed in the comments thereafter of the nature of the legal advice that Mont Blanc may have received before launching the pen in question. There was also some discussion on the legal (the use of Gandhi’s image being governed by law) and ethical (the use of Gandhi’s image for a commercial enterprise) aspects of this case, which may have become redundant in context of this report.

Specifically, WTR tells us that Mont Blanc had sought the permission of relevant government ministries, but was told that no formal permission was needed. Indeed, the government appears to have specifically told Mont Blanc that no problem was anticipated.

Which leaves me wondering what the point of the Emblems and Names (Prevention of Improper Use) Act is.

Is it just one more paper tiger in India’s legislative kitty? And does this give a free run to any entity that may wish to use pictorial or other images relating to the individuals, organisations and items listed in the schedule? 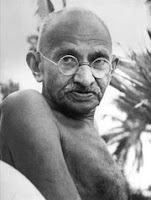 For those who may want to refresh their memories on the story, our earlier note on the dispute can be found here. Mont Blanc had been originally issued a notice by the Kerala High Court on a writ petition seeking a ban on the marketing and sale of pens depicting images of Gandhi. The petition was filed by the Centre for Consumer Education, a Kerala-based NGO, on grounds that the manufacture of these pens was wrong, illegal and liable to be prohibited under Indian law. (Image from Wikipedia)