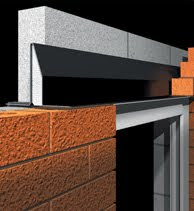 Does copyright subsist in a patent specification? The answer to this may seem obvious to most, but I did rather articulate on the obvious clearly than overlook something clearly obvious. In Catnic Components Ltd. & Anr. v. Hill and Smith Ltd. (1978), it was held by the UK High Court (Chancery Division) that copyright in a patent specification ceases to subsist upon publication of the patent application.

This UK judgment is well-known for its use of the “pith and marrow” doctrine, but its copyright angle is something I have been meaning to blog on for quite some time now.

The facts of the case are as follows:

Lintels are used to support bricks over apertures in a wall either during or after construction. These are horizontal members that are found over doors and entrances. The invention in this case is a steel lintel which is light and easy to handle as opposed to heavy ones used earlier. (picture from Catnic’s official website)

To this the Court held that the independent claim of the patent required the posterior member to be joined to the base plate, which would include an integral connection as well.

On the basis of these admissions, the Court held that since there was no copyright in the idea, there was no infringement of the copyright in the drawings. Further, interestingly, on comparison of the designs of the lintels, the Court held the defendant’s work to be original since there was a discernible difference in the designs (if so, how was the patent infringement claim upheld? Read the judgment of the House of Lords on appeal).

To rule out copyright infringement altogether, the Court turned to the issue of subsistence of copyright in a patent specification. The issue was framed thus:

“The question is the effect, if any, of the publication of the patent drawings on the enforceability by the plaintiffs of their independent copyright in substantially identical drawings”

2. Since one of the essential requirements of patent grant is full and proper disclosure of the best method of working the invention, illustrated if necessary by drawings, upon expiry of the patent there comes into being an implicit right to the public to use the drawings of the patent in any manner. This is naturally so, since if there is no such licence, the patentee may enforce the patent after its expiry through the copyright in the drawings, thereby extending the life of the patent.

3. However, such implicit right does not extend to any drawing which does not form part of the patent, barring drawings which are substantially similar to the ones in the patent.

4. Such right to use the drawings exists even if the patentee voluntarily allows his patent to lapse.

5. Also, if the patent is held invalid, the patentee retains his copyright in the drawings.

The logic offered by the Court is that when an applicant elects to apply for a patent grant, he makes a conscious decision to relinquish his copyright in the drawings in return for a limited yet stronger right in the form of a patent.

This decision of the Chancery Division was challenged by both parties before the House of Lords. The plaintiffs appealed against rejection of the copyright claim, and the defendant against the patent claim. The House of Lords desisted from expressing a concluding view on subsistence of copyright in patent specification.

The decision of the Chancery Division was delivered prior to the UK Copyright, Designs and Patents Act 1988. Before the coming into force of this Act, the position of the law on copyright in patent specifications was as follows:

Copyright in these belongs to the Crown but in normal circumstances no steps would be taken to enforce that copyright (notice of this was given in our Official Journal (Patents) on 25 June 1969). You would be allowed to copy these patent specifications freely but on the understanding that if the privilege is abused, for instance by copying for the purpose of selling them on, then the government may take action.

After the introduction of the 1988 Act, the position is as follows:

Patent specifications published on or after 1 August 1989-

After the Copyright Designs and Patents Act 1988 (CDPA) came into force, Copyright in patent specifications belonged to the applicant/proprietor (the Intellectual Property Office (IPO) though may copy and publish these as required by sections 16 and 24 of the Patents Act). The copying and issuing of copies to the public of patent specifications for the purposes of ‘disseminating information’ is also not an infringement of copyright. A notice of this general authorisation of such copying appeared in our Official Journal on 5 December 1990.

This means that you may freely copy UK patent specifications for the purpose of ‘disseminating the information contained in them’. If you were to copy the whole or a substantial part of the specification for any other purposes, such as marketing or sales, this could be an infringement of the copyright (unless the use fell within one of the exceptions to copyright).

If there are US or Indian decisions on similar lines or expressing a contra view, I request readers to share the details of the same with us.