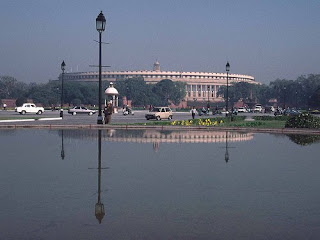 In 2008 the then Minister for Science and Technology, Mr. Kapil Sibal had introduced in Parliament the Science and Engineering Research Board Bill, 2008. The Bill as passed by both Houses of Parliament in December, 2008 aimed at constituting an autonomous body, the Science and Engineering Research Board (SERB).
Photo Credit: Bill Strong, Image can be accessed here.
The ‘Statement of Objects and Reasons‘ appended to the Bill introduces the Bill as an attempt “to create an autonomous Board with necessary administrative and financial powers and operational flexibility for promoting basic research in science and engineering in order to achieve higher levels of excellence in internationally-competitive basic research. The functions hitherto handled by the Department of Science and Technology under the advice of a Science and Engineering Research Council are proposed to be transferred to this new entity.” The driving policy consideration behind the creation of such a Board, as identified by the ‘Statement of Objects and Reasons’, is the fact that India’s furture as a global research and development hub is contingent on its investment in promoting basic research in science and engineering. Previously this task used to be carried out by the Science and Engineering Council (SERC) which was an administrative body established by the Central Government in the year 1974 to promote R&D programs in science and engineering.

Although the financial memorandum appended to the Bill provides for a sum of Rs. 200 crores towards the establishment and functioning of the Board in the year 2008-2009 and we’re currently in the year 2010 I cannot find a single trace of the existence of a Scientific and Engineering Research Board. Normally when Parliament passes an Act the Central Government must ‘notify’ the Act so as to enable the Act to be translated into law. It is often the case, as happened in the case of Competition Act, that an Act may not be notified by the Ministry-in-charge for several years after Parliament has passed it. This may happen for a variety of reasons, the saddest of them being bureucratic lethargy. Fortunately or unfortunately, the year 2009 witnessed the transfer of the dynamic Minister Mr. Sibal away from the Department of Science and Technology to the Ministry of Human Resources and Development. With his transfer even the updates to the website of the Department of Science and Technology (DST) have seemed to cease. The last press release on the website of the DST in Decemberm 2008 was the fact that the Parliament has passed the SERB Bill. There has been no press release on the DST website for entire of 2009!

The passing of the SERB Bill represents a significant attempt in attempting to build up a stronger institutional mechanism that will play a significant role in implementing India’s Science and Technology Policy. A statutory body such as the Science and Engineering Research Board (SERB) will be more stable and accountable than the Science and Engineering Research Council which was an administrative body setup by the Government and not Parliament.

A previous effort at institutionalizing such a body was when Parliament passed the Technology Development Board Act, 1995 (TDB). Other bodies such as the National Science and Technology Enterpreneurship Board (NSTEB) are creations of the Government and not Parliament. It remains to be seen when the SERB Act is notified by the Central Government.