The GI Registry recently issued an order on the Payyannur Pavithra Ring, a traditional adornment from north Kerala, stating that “the use of sentimental of religion does not bar for registration.”

Payyannur Pavithra Ring, Artisans & Devp versus K Balakrishnan [2009 (41) PTC 719 (GIG)] – unfortunately I cannot find an online copy of this order – has observations which would have been more interesting than they are at present had they been better phrased. [Image from here] FYI, for those not in the know, “pavithra” means ‘pure’ in Sanskrit and Malayalam, which will put some things in perspective below.

The Payyannur Pavithra Ring application was No. 6 in the history of GI applications in this country, and so fairly early to jump in the fray. Admittedly, it’s also taken its own sweet time to proceed to registration, for various reasons. And this will take a bit of story-telling.

1. Applicants are entitled to registration

The first objection to the application was that the applicants, a registered society of ring artisans, were not representative of the producers of the GI and not entitled to registration. This was not sustained, but to my mind, the registry’s reasons were not satisfactorily explained in the order. The order explains, albeit vaguely, the applicant’s defence for claiming rights to the application, i.e., that the artisans are special goldsmiths which have some special characteristics and have to observe discipline during the of the product, etc., but fails to place on record why the applicant’s entitlement was challenged.

2. “Use of sentimental of religion does not bar registration”

Secondly, the opponents raised the issue that the ring was “a sentimental issue of the public and could not be considered a GI product”.

In content that seems to have been picked straight from the www.payyanur.com website (or vice versa – and thereby making my typist’s life simpler!), the order goes on to state that the:

“Payyanur Pavithra Mothiram is a uniquely crafted ring shaped like a knot and considered being a sacred ornament. Usually Payyanur Pavithram is being made of Gold and Silver. The Pavithram is to be worn on the right ring finger by the person performing Vedic Karmas. It is believed that this ring will bring luck and grace to anyone who wears it with the deep devotion…”

And it continues for a few paragraphs more about the ritualistic and religious associations of the ring, which you can read here.

The opponent “also manufacturing the Payyanur Pavithra Ring and before wearing by the concerned person some pooja to be performed before the temple which is represented by the society of the applicants and the part of the cost of the product is devoted to the temple [associated with the wearing of the ring]”.

From this and preceding paragraphs, the order dismissing the opponent’s challenge, concludes thus:

“It means the ring made of gold or silver in the region is the subject matter of the GI. This is regularly in use since the Year 1011. After going through the arguments … the ring is the product available in the particular region and famous in the name of Payyanur Pavithra Ring having specific quality. The applicant has already submitted the certified Map in support of the Application. In view of that the product Ring is the goods of GI and use of sentimental of religion does not bar for registration.”


This part of the Registry’s order, which may set a precedent in other GI products with a tangential religious element, may strike a raw chord with those who have been arguing otherwise, e.g., in the case of the Tirupati laddu GI.

I offer a poorly thought out, quickly written, different, non-religious way of looking at the two grants – suppose we classify Tirupati Laddus as fast-moving consumer goods, which they are, and therefore in larger volumes, and have a larger number of manufacturers spread over larger territory, thereby diluting the identity of the “original” manufacturers and so on; versus the ring which is a durable product, therefore significantly lower volumes and fewer manufacturers, with less dilution; does such an explanation, applicable to any product which may have religious association, help defend the grant of a GI to the ring and object to the grant of the laddu? Your thoughts.

3. Ring not common to trade

The third objection raised was that the ring is common to the trade as it was in manufacture by several persons in the region, including the opponent. But the Tribunal was satisfied that “the manufacturing system of the rings are same having same quality and style in the region and to be used after performing a pooja in the temple and known in the name of Payyanur Pavithra Ring only and does not lose is originality and can’t be considered as common to trade”, thereby closing the doors on the opposition, and pushing the application for registration. 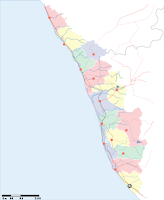 Having said all of this, I must also point you to this article from the Hindu in 2005 that I came across earlier, based on a study by the Centre for Heritage Studies in Kochi, which argues that “Ethnic ornaments, which were once restricted to certain social sections and religious groups, are now transcending the barriers of religion and caste.” Specifically,

“Pavithra Mothiram was traditionally worn by men of the Brahmin community in connection with some rituals that they performed….Gone are the days when the Brahmin community alone wore this ring, which was also the specialty of jewellers from Payyannur. The ring is now widely used by men of all caste and religion and available at almost all jewellers across the State.”

[Image: Payyanur and Kerala; from wikipedia]

In any event, I don’t have much to say on this order, for the reason that I couldn’t understand it. I don’t know if it is the fault of the persons delivering the order, or the ones transcribing it, or even the copy editors of the PTC that eventually published it. But given the rarity of GI orders (which is logical, since there are hardly any GI applications in India at present), it would have been interesting to read a clear, crisp, and well-phrased document, if only from an academic point of view. Or perhaps I expect too much.