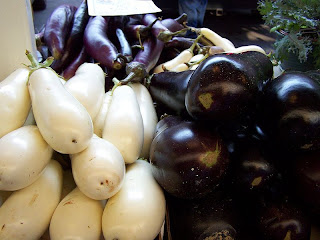 The last few weeks have been witness to several very vocal, sometime violent, protests against the introduction of BT Brinjal into the Indian market. The Ministry of Environment under the stewardship of Jairam Ramesh has attempted to convince the Indian people that this latest innovation has been tested adequately as per the law of the country and that the same were safe both for the environment and for human consumption. The fiasco at the public hearings however is clearly indicative of the low levels of confidence that the Indian people have in the regulatory process for biotechnology products. Ultimately the Ministry has announced that it is withdrawing its proposal to introduce BT Brinjal in the Indian market.
Image from here – photo credit – J.E.Fee
The lack of confidence in bio-tech products is obviously bad news for innovation in the bio-tech sector. If the people do not have confidence in the regulatory process it is but obvious that innovation in this sector will suffer. For example the face of modern medicine and the pharmaceutical industry may have been completely different if the thalidomide disaster of the 60’s had affected the U.S. the same way it affected Europe.

This brings us to the inevitable question of what exactly is the regulatory mechanism for biotech products in India?

Currently the biotech sector is regulated by two separate committees and ministries – none of which seem to have a solid legislative basis. The two Ministries at the fore-front are the Ministry of Environment and the Department of Biotechnology which functions under the Ministry of Science and Technology.

These two Ministries have two further committees under them – The Genetic Engineering Approval Committee (GEAC) and the Review Committee on Genetic Manipulation (RCGM). While the latter is the apex body functioning under the Ministry of Environment, the latter functions under the Department of Biotechnology. The only legislation which is vaguely related to these Committees is the Environment Act, 1986. The Committees are mostly regulated by a complex web of rules and regulations drafted by the bureaucrats of these Ministries. More controversially however a non-specialist IAS Officer is heading the GEAC – a specialist body. The guidelines and notifications are partially a result of writ petitions filed before the Supreme Court of India. However to the credit of these Committees I must mention that their websites host a surprising amount of useful information.

The question therefore is why India lacks a credible statutory mechanism to regulate this very important sector?

The answer is absolute lethargy. The Department of Biotechnology had, ages ago, drafted a bill to setup an autonomous regulator – the National Biotechnology Regulatory Authority. We had blogged about it here. For some reason it has not yet been introduced in Parliament. The Financial Express has reported earlier this month that the Bill to setup the Biotechnology Regulatory Authority of India (BRAI) will be okayed by Cabinet later this month so that it can be introduced in Parliament in the budget session.

Hopefully this Bill will be thought through carefully and not rushed through Parliament like the rest of the legislations these days.