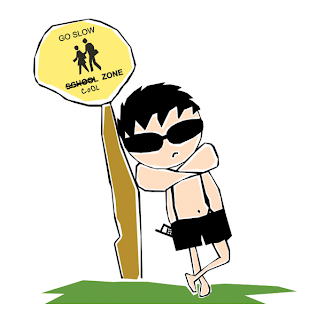 Commerce Professor: what is the most important source of finance for starting business?
Tintumon: “Father in law”.

Tintumon, is a character which was created and spread through text messages in mobile phones. This character is portrayed as a small boy who likes to ask embarrassing questions and has a very straightforward thinking. He is quick-witted, mostly inventive, and normally can’t stop himself from commenting on everyday issues.

M/s. M.C. Audios & Videos published a Trade Mark Caution Notice in a newspaper through their attorneys, Joachim & Janson, cautioning the general public that M/s. M.C. Audios & Videos is the legal and authorized owner of the ‘Tintumon’ trademark and is having the intellectual property rights over the name, logo, design, shape, and picture of “Tintumon”. It is also mentioned that, in order to accord statutory protection to the trademarks, M/s. M.C. Audios & Videos has filed Trademark applications in class-09, class-16, class-38 and 41 the Trade Marks Act, 1999 and that the same is under process of registration at Trademarks registry, Chennai.

Trademarks in India are classified in about 42 classes and these classes again are further sub-divided. The main objective of trademark classification is to group together the similar nature of goods and services.

Issues:
Two issues are very crucial here, firstly- whether M/s. M.C. Audios & Videos is entitled to get trademarks registration for a popularly known character like Tintumon?
Secondly- whether filing trademark applications gives the applicant a right to publish a Trade Mark Caution Notice or not?

The website tintumon.com developed by “Foradian” an Internet engineering company where people can read and share Tintumon’s Jocks. “Foradin” claims that, they made Tintumon, the first open source character in the world through the website. However the popularity of Tintumon increased to such an extend that books were published on Tinutmon jokes; even the mainstream media referred Tintumon in a Malayalam movie named Kalyanaraman (Year 2002). So it can be argued that Tintumon is a character, which is open and exercisable, by all persons and may therefore qualify as “Publici juris”. The term “Publici Juris” is a term used to describe those things that belong to the entire community, and not to any private party. As far as the spirit of Indian Trade Marks Act 1999, no one can attempt to register a mark which can be classified as “Publici Juris”.

Previously it has already pointed out that Tintumon is a highly popular character, books even films also mentioned about it, now if M/s M.C. Audios & Videos starts to use Tintumon as their Trademarks then it will surely cause confusion among common people. Just because of Tintumon “trademark” common people may buy M/s Audios & Videos products with an impression that those Audios or Videos are related with Tintumon’s Jock, but the reality may be otherwise. So it can be said that there is a sure possibility of causing confusion among people, if ‘Tintumon’ is registered as trademark in the name of M/s Audios & Videos. So as per section 9(2)1 M/s Audios & Videos are not entitled to get trademarks registration for Tintumon.

The said “Trade Mark caution Notice” is claiming that M/s. M.C. Audios & Videos has filed Trade mark applications under the Trade Marks Act, 1999 and same is under process of registration at Trademarks Registry, Chennai. It has also notified that unauthorized use of the concerned Trade Mark/Trade name/ Tintu mon Logo or a deceptively/confusingly similar Trade Mark or imitation of the mark by any person, firm or company in respect of their goods or services through Print, Audio, Visual media and Electronic means would amount to passing off, falsification, false application of the aforesaid mark, name and/ or false trade description actionable under the Trademarks Act, 1999.

The most important point is whether an applicant who has not got a registration for a trademark yet, is entitled to publish such a caution notice? Section 27 (1) of 1999 Act, clearly mentions that:
“No person shall be entitled to institute any proceeding to prevent, or to recover damages for, the infringement of an unregistered trade mark.”

A threat also has given in last paragraph of the Notice, as: “Persons violating and disregarding the aforesaid cautionary caveat will do so at their own risk, cost, responsibility and detriment and will additionally expose themselves to appropriate civil and criminal proceedings, which our client is dearly and explicitly authorized in law to take without further notice”.

Section 142 of the TM Act, 1999 provides a remedy against groundless threats of legal proceedings. A suit under S. 142 (1) will not lie if the registered proprietor of the trade mark (or a registered user) with due diligence commences and prosecutes an action for infringement against the person threatened. But here the concerned party is not yet a registered user of the trademark; so they are not entitled to put out such a caution notice and are liable to be sued for the same.

Therefore it maybe possible to file a law suit against M/s. M.C. Audios & Videos for groundless threats of legal proceeding.