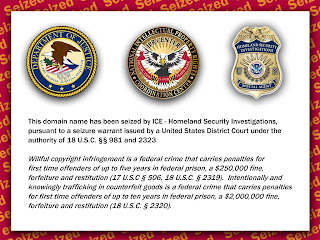 In a new unprecedented offensive against intellectual property violations over the internet the United States Government on the 29th of November, 2010 seized over 82 websites, and counting, for allegedly peddling in counterfeit goods which violated trademark and copyright laws of that country. Users trying to access some of these websites such as http://louis-vuitton-outlet-store.com/ were confronted with the insignias of the Department of Justice, the National Intellectual Property Rights Coordination Centre and the ‘Special Agent’ for Homeland Security Investigations’. Apparently none of the websites were informed prior to the seizures. It is also not clear as to which United States District Court has issued the Order.

The seizures have apparently been made under a warrant issued under 18 U.S.C. 981 i.e. the Title 18 of the United States Code which relates to the Law of Crimes and Criminal Procedure. The provision of law in question is rather broadly worded and allows for the authorities to seize all property that has been used for a defined set of civil or criminal offences. The seizure in question however has been a civil forfeiture. The message on the seized website also makes reference to 18 U.S.C. 2231. This provision interestingly deals with forfeitures in the case of ‘stolen property’. The provision basically allows the Court to enter an “appropriate protective order with respect to discovery and use of any records or information that has been seized”. This means that the Court may allow the property in question to be seized pending adjudication of the dispute following which the Court will decide the legality of the subject matter. At the conclusion of such hearings the civil court may dispose or destroy the seized material in a manner prescribed by the law.

The above action of the United States Government, although unprecedented, is a mere replication of real world practices in the virtual world. For example Section 135 (2) of the Indian Trade Marks Act, 1999 allows Indian district courts to pass ex-parte interim orders allowing the authority in question to preserve the infringing goods, documents or other evidence which are related to the subject-matter of the suit. This provision is basically a codification of the famous Anton Piller orders devised by Justice Laddie whereby the Courts ordered ex-parte seizures of trademark infringing material so as to preserve the same during the course of trial. The danger of issuing notice in such cases is that the defendant in question may destroy the property before trial commences. Such orders are issued on a regular basis by the Delhi High Court but only with respect to the real world and not the virtual world.

Having said all of the above there is no denying that the replications of such actions online is distinctly chilling since the internet has always been a free space and all previous attempts to regulate intellectual property rights on this domain has been by IPRs owners themselves and not agencies of the State. While there is no doubt that some of the websites were dealing with infringing goods there has been a considerable outrage over the seizure of some websites which are dealing with original works. For example popular Hip Hop websites RapGodfathers.com, dajaz1.com, Onsmash.com. have all been seized by the U.S. Government on the grounds that they were carrying pirated music despite the owners contending that they were in fact carrying legitimate music.

The predominant media spin is that the entire operation was planned against ‘counterfeit Chinese goods’. In this season of ‘China-bashing’ this is a bid to lend a nationalist shade to the operation which basically involved the U.S. Government enforcing private property rights by using public money which in today’s America is a scarce commodity. In any case this operation does raise troubling questions as to national boundaries over the internet. Although this operation targetted only American websites are there any ICANN safeguards to ensure that in the future the U.S. Government is not tempted to disrupt online commerce in other counries which may have an indirect effect on it.