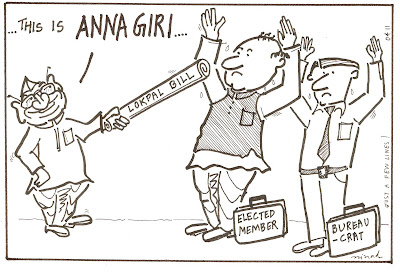 The Hazare anti corruption hunger strike captured the imagination of the nation for the last few weeks.

As many of you know, corruption is an issue that is of immense interest to SpicyIP, which has attempted to cure this evil plague in the IP space through the deployment of one principle, namely that of transparency.

Needless to state, corruption is a complex multifactorial issue and we need to hit it from several angles, the law being just one of them.

Hazare and crew have earned both bouquets and brickbats. Without delving into the legitimacy of a hunger strike in a supposedly functioning democracy, I merely reflect (in this Times of India piece,) on the opportunity that this agitation provides to open up the law/policy making space in India. The piece includes a detailed reference to the Indian Bayh Dole bill and the abysmal level of stakeholder and public consultation that one witnessed during that process.

Since the online version of the piece can be accessed only after your register (freely) on the TOI site, I’m reproducing it below:

“It fell several notches short of a Tahrir square. But it was enough to capture the imagination of nation, a nation that has witnessed scam after scam in the recent past, and where, attempt after attempt to introduce an anti-corruption law failed for four long and continuous decades.

Indeed, thanks to a man who threatened to take his own life, “Lokpal”, a term that might have had raised eyebrows till a month ago, has now gained common currency. Some see the man as an enlightened saviour of sorts. Others as a dangerous blackmailer at the brink of subverting a precious democratic process that many believe we enjoy in India. I come neither to praise Anna Hazare nor to bury him. But to simply point to an enormous opportunity that his act of starving presents for us as a country.

That Hazare gained enormous public support by threatening to sacrifice his own life at the altar of an anti-corruption principle that he staunchly believes in is beyond doubt. However, what of the implementation of this principle through the technicality of a law? It’s a fair guess that many of those who came out in support through rallies and candle light processions would have failed to read the bill, be it the government “Lok Pal” version or any of the many civil society “Jan Lok Pal” versions.

It is this participatory deficit that the Hazare movement must seek to redress. It must leverage the popular sentiment it has thus far gained by actively encouraging the public to participate in the law-making process. That government laws are drafted in secret for the most part is no new revelation. Even at the stage of parliamentary scrutiny, most intensively felt during the myriad “sittings” of standing committees, the ones consulted are a select few;not the public and in most cases, not those with subject matter expertise.

To this extent, law and policy-making processes in this country suffer from a serious democratic deficit. Granted that the formal processes (such as the act of voting by elected representatives, many of whom may have never read beyond the title of the bills presented) are all complied with, but substantively, the process is a largely non-deliberative one, with bills being presented and voted upon, for and at the behest of a select few.

Apparent government efforts to instill public participation are far from optimal. Many a time, bills are never released for public views or participation. And even when they are, the websites that call for participation are far from welcoming. The Indian “Bayh Dole” bill, seeking to regulate the management of intellectual property at universities, is an excellent example of the sheer deficit in the process. A law firm with very close ties to the government was tasked with drafting the bill. It borrowed significantly from a US legislation on the same theme, sans any consideration of the techno-cultural specifities of India, and even more problematically, sans any consultation with key stakeholders, namely universities and public-funded research institutions.

The bill was then secretly peddled between different ministries. After much public hue and cry, the bill was made available on a government website, but with no indication that public comments were welcome, and after four years since the first draft of the bill. Subsequently, even at the stage of parliamentary review by a standing committee, it was not until the Indian Institute of Science went to the press claiming that it was never consulted, that the committee relented and called for wider stakeholder participation.

Thanks to this participation, the committee was able to appreciate that the bill was fundamentally flawed. It therefore directed the government to make extensive changes to the bill. By this time, five years had elapsed and the government was forced to go back to the drawing board. A process that fostered wider consultation earlier on in the lawmaking process would have saved us all this wasted time and effort.

Given this backdrop, the moral success of the Hazare agitation throws up an excellent opportunity to open up this closed law-making process and to pave the way for more deliberative discussions. Unfortunately, the Hazare movement has come across as controlled by a select few who wish to replace the government coterie with their own. Further, several discordant notes have already been struck by the various statements by Hazare, his lieutenants and others that he chose to share stage with. Little wonder then that the movement has attracted the ire of many who are suspicious of the threat to our democratic process.

Questionable as their means are, Hazare and club have broken new ground by gaining admission to a closed-door law making process. It would be a travesty if they now replicated the hegemony they seek to challenge. They must now leverage the moral capital gained so far and translate it to a call for wider and more informed public policy and law making. This must involve not just educating and sensitising the public, but also our ministers and parliamentarians.

For, in the allegedly selfless act of starvation by an endangered Gandhian species lies the hidden potential to begin the slow process of transformation from a largely formal democracy to a more substantive and participatory one.”