“A secretive, multi-national trade agreement that threatens to impose restrictive intellectual property laws all over the globe”- sounds like ACTA, right? And ACTA effectively died a few days ago when the European parliament clearly rejected it, so there should be nothing to worry about.
Unfortunately, that quoted line is not about ACTA but rather describes the Trans-Pacific Partnership Agreement (TPP). It’s however more expansive than ACTA and potentially far more destructive. Here’s a brief update about it:
What is the TPP?
The TPP is ostensibly a Free Trade Agreement that the US is negotiating with 8 other nations – Australia, Peru, Malaysia, Vietnam, New Zealand, Chile, Singapore and Brunei; Mexico and Canada have also been invited to join in and Japan is expected to join in as well. The rather secretive negotiations have been going on since 2009 and are expected to be complete by the end of 2012. The agreement also is being left open for other countries to join at later points in time.
Following the pattern of ACTA, after first coming under heavy criticism for non-transparent negotiation procedures, the TPP really has started coming under fire after recently leaked drafts and proposals have been circulated.
Why you should care:  (The IP issues are at no.5 if you want to skip down)
1. Lack of transparency: The negotiations have all been covered in much secrecy with even members of the US Congress being denied access to the drafts. At the same time however, over 600 corporate representatives have been given full access to all its details under the condition that they don’t reveal any details. (See here and here). In February 2011, US’ proposals on Intellectual Property, Regulatory Coherence and Drug Formularies were leaked and made available by Citizens Trade Campaign. In June, 2012 they also  made available the leaked Investment chapter of the draft agreement. Aside from this, there seem to have been several other leaks. And it appears there are several things to be worried about.
2. Extra-judicial enforcement: The dispute resolution process sets up an international tribunal seems to circumvent domestic judicial systems. It also seems to be very MNC friendly, granting them power to challenge countries’ laws, regulations and court decisions in this international tribunal. As pointed out by Citizenstrade, there is also a worrying lack of transparency, consistency and due process (as per the text) which could lead to a situation where ‘the tribunals would be staffed by private sector lawyers that rotate between acting as “judges” and as advocates for the investors suing the governments.’
3. Corporate responsibility a joke: The TPP obliges member countries to provide a host of extreme new privileges (taking some of the worst aspects of NAFTA – read page 3 here for more details) while there are no general exceptions to safeguard environmental, health, labour or consumer protection policies. 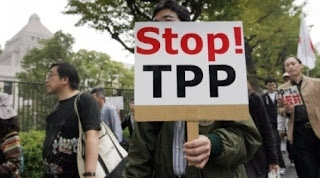 4. Pharmaceutical Pricing:  Proposals here include introducing new administrative and judicial appeal systems to ensure that governments are ‘properly valuing’ drug patents when they buy them for their public health programs. Why these drugs require ‘proper valuation’ is beyond me. If pharmaceuticals don’t wish to sell at the prices Governments are offering when buying en-masse (which is obviously lower than individual/smaller buyers), then pharmaceutical companies aren’t being forced to sell their drugs. However, clearly pharma lobbyists have been hard at work to bring in provisions which allow them to sell en-masse to governments while also raising the prices. Sean Flynn has analysed the section here.
5. IP issues: The TPP actually seems more restrictive than even the ACTA! All signatory countries will have to bring their domestic laws in line with the IP provisions laid out here. Some of the problematic IP proposals are as below:
If these weren’t enough, there are also several other issues that KEI and EFF have (along with these) described better here and here respectively.
As Amlan pointed out in his previous post, mass protests and momentum led to the collapse of what initially seemed an unbeatable ACTA. However, the issues with the TPP are far more complex and nuanced. Coupled with the short attention span of the public and it’s ACTA victory, this may be a harder cause to raise shouts about but it is one that must be won nonetheless. The 13th round of negotiations is currently going on amidst much letter writing and protests by civil society. Hopefully everyone will be keeping a close eye on this new beast.