Plain packaging received a smokin’ thumbs up from the Allahabad High Court in July 2014. The Allahabad HC allowed a writ petition asking for implementation of plain packaging and directed the government to implement the scheme at the earliest. For the uninitiated, Plain packaging regulation aims at prohibiting logos, colors, and images from appearing on tobacco packages. Manufacturers are only permitted to print the brand name and descriptors in a standard font and size against a standard background color. You may read the judgment here.

The petitioner was Delhi based Love Care Foundation, a non-profit committed to improving quality of life of unprivileged children. The petitioner argued that attractive packaging on cigarettes and tobacco products was a pseudo mode of advertisement and that such packaging resulted in increased sale of tobacco products, particularly on young impressionable minds.

The petitioner cited the Supreme Court’s judgment – Murli S. Deora v. Union of India (2001) which led to the passing of the Cigarettes and other Tobacco Products (Prohibition of Advertisement and Regulation of Trade and Commerce Production, Supply and Distribution) Act, 2003. Thereafter the Cigarettes and other Tobacco products Rules, 2008 were framed and they mandated health warnings against tobacco use on the packs. As a consequence, stringent restrictions on smoking were placed such as the ban on smoking in public places and on advertisement of cigarettes. The petitioners produced a the objects and reasons of the 2003 Act (relevant part below):

“An Act to prohibit the advertisement of and to provide for the regulation of trade and commerce in, and production, supply and distribution of cigarettes andother tobacco products and for matters connected therewith or incidental thereto……….”

The petitioners argued that the intention of the legislation was to prohibit advertising of tobacco products, however, the products were actually being sold in attractive packaging, thereby defeating the purpose of the legislation.

To provide evidence for the benefits of plain packaging, the petitioners cited the case of Australia ( implemented plain packaging in 2012) which reported a co-relation between decreased sales of tobacco products and implementation of plain packaging. Similarly, tests in Brazil had shown that removing descriptors from the plain packs further decreased the ratings of appeal, taste and smoothness, and also reduced associations with positive attributes. Further, Plain packaging has been recommended by the World Health Organization Framework Convention on Tobacco Control as a component of marketing restrictions.

Returning to the Indian context, the petitioners stated that Article 47 of the Constitution vests a duty with the state to raise the level of nutrition and standard of living to improve public health. Implementing measures to decrease consumption of tobacco is in furtherance of the same duty.

The Court observed that neither the Union of India nor the State of U.P. Raised any objections against the petitioner’s assertions or prayer, and was convinced that plain packaging was a step in the right direction. The Court proceeded to direct the governments to take adequate steps towards implementation of plain packaging. The litigation was fairly straightforward in the Allahabad HC with no respondents from the tobacco industry. The government replied that amendments to the 2003 Act were under consideration, and the legislature will comply with the Court’s order by reflecting it in the amendments.

Developments after the judgment: Bill on Plain packaging reintroduced in Lok Sabha

Baijayant ‘Jay’ Panda, a Lok Sabha MP had submitted a private members bill on plain packaging in December 2012, which was scheduled to be reintroduced in August 2014. In fact, an Australia-India Taskforce on Tobacco Control was set up to examine the feasibility of plain packaging of tobacco products in the Indian context, and in 2012 it released a policy document titled ‘The Case for Plain Packaging Made Plain – From Australia to the Indian People: Assessing the Socio-Political Scenario of Introducing Plain Packaging as a Policy Intervention’. You may read the document here.

Plain Packaging in rest of the world

When Australia implemented the plain packaging rule, its legality and constitutionality was immediately challenged in the High Court of Australia, which the tobacco industry lost. Plain packaging regulations restrict the private rights of the brand(trademark) holders. Indonesia, the Dominican Republic and Cuba are few of the countries to register a complaint with the WTO alleging violation of the TRIPS agreement by Australia. In April 2014, the WTO decided to appoint a single panel to study five complaints. For an analysis of potential violation of TRIPS provisions in connection with plain packaging, read Thomas’ post here. In the US, proposal for a bill on graphic warning labels was rejected as unconstitutional.

There is already talk of taking the spirit of plain packaging further and applying it to soft drinks, alcohol and sugary foods in the next few years (New Zealand). This also raises the interesting question of repackaging re tobacco products. Except in the case of tobacco the intention is to wean consumers off smoking completely by reducing the appeal of smoking. Compare this with the demand for de-branding of pharmaceuticals where the intent has been to give consumers the freedom to choose the most inexpensive alternative product in a particular therapeutic category i.e. choose generic drugs. Another example of repackaging (vehicle wrap), albeit an odd one is 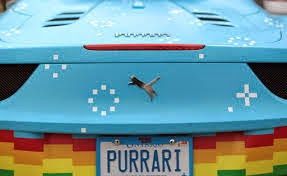 when music artist Deadmau5 recently bought a Ferrari and fashioned it into a feline looking “Purrari”. Taking a cue from Deadmau5, can an individual, acting in public heath interest, obliterate the logos and all associated special features of the brand from a cigarette pack and put it up for resale? When Deadmau5 took it for a ride to several car rallies and then offered it for sale, Ferrari promptly sent a cease and desist notice to Deadmau5 and asked him to undo the customisations to the Ferrari. Offering the car for sale under a different trademark irked Ferrari, it may be argued that the customisation diluted the brand Ferrari. However, the matter did not reach the Courts as Deadmau5 obliged and undid the customisations to his Ferrari. In the case of cigarette repackaging, the act may constitute trademark dilution and lead to loss of distinctiveness of the trademark. However, the repackaging may lead to added confusion even by applying the brand in a standardised manner, and the brand owner will definitely object to the repackaging since it will damage the reputation of the mark. The issue then boils down to the trademark owner’s ability to stop repackaging of authentic goods. I turn to a case in US- Farouk Systems, Inc. v. Target Corp. Inc. 2008. Here the defendant, after repackaging the concerned product added a disclaimer stating that “the original product had been repackaged and distributed by Pro’s Choice(defendant), which was unrelated to and not licensed by the trademark holder, and that Pro’s Choice assumed full responsibility for the product and the package.” The Court observed that trademark law does not apply to the sale of genuine goods, even when the trademark owner does not consent to the sale. What if the individual reselling the cigarettes used a similar disclaimer? I’m inclined to assert that use of such a disclaimer on the repackaged product will not destroy a cigarette brand owner’s reputation (since the quality of the good and identity of source is intact. Therefore the subsequent sale will technically not take an unfair advantage of or have a detrimental effect on the cigarette brand and thus may not constitute trademark dilution.

Note: This post has been edited to insert the section on “Developments after judgment.”