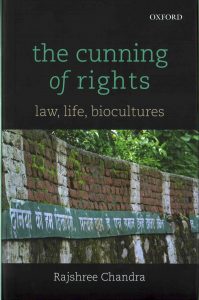 We are happy to bring to our readers a guest post by Rajshree Chandra on her book ‘The Cunning of Rights: Law, Life, Biocultures’. Rajshree is an Associate Professor of Political Science at the University of Delhi. She is also a Senior Visiting Fellow  at the Centre for Policy Research, New Delhi. Her current work seeks to build upon her earlier monograph titled “Knowledge as Property: Issues in the Moral Grounding of Intellectual Property Rights”. If any of you are interested in reviewing this book, please send us your review and we would be happy to publish it if it meets our editorial standards.

As newer forms of intellectual property – seeds, germplasm, genetic resources, plant varieties—materialize through advancements in biotechnology and the global assemblages of intellectual property (IP), a variety of entitlements, claims, and imaginations of citizenship are bred, mimicking the hybrid culture of genetic configurations. The Cunning of Rights: Law, Life, Biocultures analyses the theoretical and philosophical frames of new (biotic) property, and assesses how its altered metaphysics inscribes itself in the politics of plant genetic resources. It probes how rights get ‘framed’ within and by law, in the diverse yet closely interrelated aspects of social, cultural, and biological life.

The term biocultural is used to understand the nature of rights that are framed at the nexus of biology and culture, that is, to refer to a new cluster of individual and collective rights that have emerged in the context of biotechnological innovation and prospecting of plant genetic resources. It regards the different modes of apprehending nature and socializing biology as culturally varied. In this reading, both the innovators’ rights and indigenous communities’ claims and entitlements are regarded as species of cultural claims.

The book, however, focuses on biocultural entitlements of farming and indigenous communities—people who are at a distance from the global networks of trade, politics, science, and technology. It explores the terms on which the interests of these indigenous communities are included and institutionalized as well as the degrees of exclusion and stratification that accompany them. It attempts to uncover the ‘cunning’ or duplicitous nature of these rights—the chasm between their intended benefits and their actual outcomes.

The ‘cunning’ thesis seeks to gesture towards a double entendre of biocultural entitlements that makes it face two ways, as well as become, arguably, two-faced.  On the one hand, the technologist or the innovator needs to establish her entitlement that translates, first, into a qualified freedom to use biogenetic commons, and second, into a right over that which he innovates. This requires establishing a position of superiority and a rule of difference: rules that separate an innovator’s scientific claims from those of the indigene who is deemed to produce only lay, folk, unscientific knowledge.

On the other hand, the indigene too needs a rule of difference: rules that safeguard her cultural identity and assign her a co-equal space within the rights’ assemblage. Both these impulses are contradictory, and once deployed concurrently—as in the IP assemblage—rights have to simultaneously enact both universality and particularity, difference and similarity. It is in this sense that biocultural entitlements can be said to have two faces. But, the cunning and the two-facedness lie in privileging a particular rule of difference –  one that institutionalizes the epistemic superiority of the technological innovator.

Culture becomes the substitutive object. In one instance it gets incorporated as strong proprietary IP claims; in the other, it undergoes a discursive delimitation translating into a weak range of entitlements. While the latter claims to ‘speak for the subaltern’ and speak in the name of indigeneity, its primary allegiance remains the interests of the innovators, admitting a built-in dysfunction that does not take into account the future trajectory of rights activity, competition, and conflicts. The cunning thesis points to a shift in the discourse of civility—from a denial of rights to an inclusion of rights.

Entitlements render a citizen capable of attesting to the legitimacy of the law. In the last five decades or so, socio-cultural rights have become the international moral currency to mitigate, and address issues of, human suffering. Indigenous peoples’ rights and farmers’ rights are cases in point. They have become aspects of a new political morality that envisions new domains and modes of citizenship. Any engagement with rights, however, ought to be at a critical distance that allows us to work with and through them, and at times persuasively refute them for their capacity to become tacit instruments of political domination while posturing as antidote to political or economic power. As new subjects and objects of biotic ownership are created, biocultural rights become the new ‘ethical’ instrument through which new biocultures are imagined and through which power is deployed in subtler and newer ways.

Much of this book can be read as a critique of legalized biocultural entitlements, both as a conceptual category and a practical framework. It is a critique of the narratives that drive the IPR regime, the discourses that sustain and legitimize it, and the practices into which such discourses devolve. I sort these biocultural entitlements into three – benefits, privileges and rights. I examine reflexive interactions between discourse and the visible aspects of rights’ content: i.e through routines, language, structures, institutions and access. In short, through the many “speeches” of law, I make a central claim that the cunning of rights lies in bringing these contesting entities to become part of a “legal life” that uses the idiom of law to conflate conceptual, cultural and political differences.