While Part I was concerned with the background to this dispute, this post concentrates on the reasoning of the Full Bench, as well as analyses its jurisprudential impact. 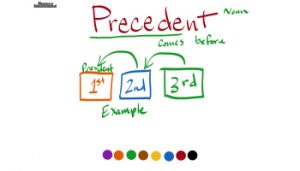 The Court held that the plain language used in sub-sections (4) and (5) answered the questions at hand. It was noted that 29(4) uses the words “in the course of trade” and “in relation to goods and services” which were absent in 29(5). Conversely, “as his trade name or part of his trade name, or name of his business concern or part of the name, of his business concern” was absent in 29(4). The Court used this difference in language to hold that 29(4) would clearly apply in a “trademark v. mark” situation while 29(5) would apply in a “trademark v. trade/corporate/business name” situation.

The Court dismissed the fact that the definition of a ‘mark’ includes ‘name’ to be of importance in the present matter. Further, the Court observed that if 29(4) was to apply to those cases where the second condition of 29(5) was not satisfied, then the requirement specially incorporated in 29(4) for a mark to be used “in relation to goods and services” would become redundant. To clarify, the first and second conditions of 29(5) are the use in trade/corporate name, and the use in respect to goods and services for which the trademark was registered, respectively.

To come to this conclusion, the Court relied on the 2009 Supreme Court decision of Vijay Narayan Thatte v. State of Maharashtra, and held that when the language of the statute is clear, the literal rule of interpretation has to be applied; one can depart from this rule only in the event of an ambiguity. The Court observed that since there was no ambiguity to be found, the use of a trademark as a trade/corporate name could not be read in to Section 29(4), as that would be contrary to its plain meaning. The Court further dismissed Justice Patel’s observations on Section 29(8), stating that this sub-section had no relevance in the interpretation of sub-sections (4) and (5).

The Court additionally referred to the Objects and Reasons on Section 29, along with the Eighth Report on the Trade Marks Bill, 1993 submitted by the Parliamentary Standing Committee on Industry as appointed by the Rajya Sabha, and found both to be in consonance with their stand.

This 2013 Delhi High Court (‘DHC’) decision was relied on by the Plaintiffs in this case. A suit for infringement was filed to prevent the Defendants from using ‘Bloomberg’ in their real estate business in violation of the Plaintiffs trademark, which was registered for broadcasting services. The DHC observed that in situations where both conditions of Section 29(5) were met, it would function as a ‘no fault’ provision (or afford a higher degree of protection where both elements exist), and an injunction would necessarily follow. The DHC here, however digressed from the Raymond decision, and held that in a situation where the second requirement of Section 29(5) is not fulfilled, it could not be said that there would be no protection for a registered trademark.

The DHC observed that the legislature could not have intended not to provide a remedy where is registered trade mark is used as a corporate name but for dissimilar goods. Differentiating the Raymond order, the DHC stated that the Bombay High Court did not have an occasion to consider an important point of distinction between Sections 29(1) to (4) and 29(5): that Section 29(5) does not require the registered proprietor to show a likelihood of confusion. Therefore, the DHC held that it was possible to harmonize the provisions of 29(4) and 29(5) without rendering either section otiose. The DHC proposed that should such a situation arise; the Plaintiff would be allowed to seek protection under 29(4) should all the conditions mentioned therein be satisfied.

The Full Bench of the Bombay High Court disagreed with the above judgement, and reiterated that 29(4) would apply only when a mark is used in the course of trade in relation to goods or services which are not similar to those for which the trade mark is registered.

Justice Patel had framed four questions for determination in the April 2016 order. Based on the above enumerated observations, the Court answered them as follows: (1) There exists no cause of action for infringement when a registered trade mark is used as a corporate or trading name in respect of dissimilar goods. (2) That such use is excluded from the purview of Sections 29(1), 29(2) and 29(4), and these Sections are restricted to the use of a trade mark ‘as a trade mark’, i.e., in the ‘trade marky’ sense. (3) That Sections 29(4) and 29(5) operate in separate and mutually exclusive spheres. (4) With regards to the correctness of the Raymond decision, the Court stated that this question did not need to be answered separately. The Full Bench then remanded the suit to the Single Judge, having answered the questions referred to it.

This Full Bench order lays down seemingly dangerous precedent that could possibly act as a loophole for trademark infringement. As was highlighted by Justice Patel in the April 2016 order, this holding will compromise the rights of owners of well known trademarks, should their marks be used in trade/corporate names for dissimilar goods. The Delhi High Court’s Bloomberg order was very well written, and in my opinion, this Court did not give strong enough reasons to refute the DHC’s reasoning.

While it is unfortunate that this holding will now function as precedent, it is a very interesting debate to follow, should this question again come up for determination.

I’d love to hear from our readers on this conundrum. Please do leave a comment below!