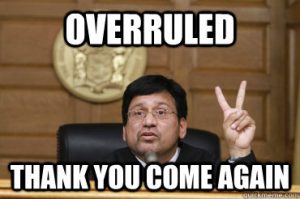 Image from here (not representative of Justice Bhat)

At a conference held earlier this month in Bangalore (organised by Professors Yogesh Pai, Arul Scaria & T. Ramakrishna of NLU-D & NLSIU), I was surprised and delighted to learn that the infamous judgment in the case of Time Incorporated v. Lokesh Srivastava (2005) allowing for the grant of punitive damages in IP cases was overruled in 2014 by a Division Bench of the Delhi High Court led by Justice Ravindra Bhat. As judgments go, the Times Incorporated judgment was a terribly flawed judgment. For some of my previous criticism regarding this judgment, please do read this earlier post of mine in context of the Sholay judgment by Justice Manmohan Singh.

It appears that I am not the only one who did not know that the judgment was over-ruled because judges of the Delhi High Court have been citing the judgment as authority even after 2014.

In the Times Incorporated judgment a Single Judge of the Delhi High Court while dealing with a trademark infringement case opened the door to the granting of punitive damages in all IP cases. The court reasoned as follows:

“This Court has no hesitation in saying that the time has come when the Courts dealing actions for infringement of trade marks, copy rights, patents etc. should not only grant compensatory damages but award punitive damages also with a view to discouraged dishearten law breakers who indulge in violations with impunity out of lust for money so that they realize that in case they are caught, they would be liable not only to reimburse the aggrieved party but would be liable to pay punitive damages also, which may spell financial disaster for them. In Mathias v. Accor Economy Lodging, Inc. reported in 347 F.3d 672 (7th Cir. 2003) the factors underlying the grant of punitive damages were discussed and it was observed that one function of punitive damages is to relieve the pressure on an overloaded system of criminal justice by providing a civil alternative to criminal prosecution of minor crimes. It was further observed that the award of punitive damages serves the additional purpose of limiting the defendant’s ability to profit from its fraud by escaping detection and prosecution. If a tortfeasor is caught only half the time he commits torts, then when he is caught he should be punished twice as heavily in order to make up for the times he gets away This Court feels that this approach is necessitated further for the reason that it is very difficult for a plaintiff to give proof of actual damages suffered by him as the defendants who indulge in such activities never maintain proper accounts of their transactions since they know that the same are objectionable and unlawful.”

“With due respect, this Court is unable to subscribe to that reasoning, which flies on the face of the circumstances spelt out in Rookes and later affirmed in Cassel. Both those judgments have received approval by the Supreme Court and are the law of the land. The reasoning of the House of Lords in those decisions is categorical about the circumstances under which punitive damages can be awarded. An added difficulty in holding that every violation of statute can result in punitive damages and proceeding to apply it in cases involving economic or commercial causes, such as intellectual property and not in other such matters, would be that even though statutes might provide penalties, prison sentences and fines (like under the Trademarks Act, the Copyrights Act, Designs Act, etc) and such provisions invariably cap the amount of fine, sentence or statutory compensation, civil courts can nevertheless proceed unhindered, on the assumption that such causes involve criminal propensity, and award “punitive” damages despite the plaintiff‟s inability to prove any general damage. Further, the reasoning that “one function of punitive damages is to relieve the pressure on an overloaded system of criminal justice by providing a civil alternative to criminal prosecution of minor crimes” is plainly wrong, because where the law provides that a crime is committed, it indicates the punishment. No statute authorizes the punishment of anyone for a libel- or infringement of trademark with a huge monetary fine-which goes not to the public exchequer, but to private coffers. Moreover, penalties and offences wherever prescribed require the prosecution to prove them without reasonable doubt. Therefore, to say that civil alternative to an overloaded criminal justice system is in public interest would be in fact to sanction violation of the law. This can also lead to undesirable results such as casual and unprincipled and eventually disproportionate awards. Consequently, this court declares that the reasoning and formulation of law enabling courts to determine punitive damages, based on the ruling in Lokesh Srivastava and Microsoft Corporation v. Yogesh Papat and Another, 2005 (30) PTC 245 (Del) is without authority. Those decisions are accordingly overruled.”

I have never seen a judgment over-ruled more decisively and with such clarity of thought. I doff my proverbial hat to Justice Bhat for over-ruling the decision in Times Incorporated. It was a much needed judgment to restore some sense of balance to the Delhi High Court’s runaway damages jurisprudence.

I should however add that Justice Bhat does not entirely close the door on granting the plaintiff damages in excess of what is required to compensate for losses suffered. His judgment does allow the court to grant “exemplary damages”. He eschews the term “punitive damages”. Referring to English precedents, which have been approved by the Supreme Court of India, Justice Bhat states that exemplary damages maybe granted only in the following cases:

“a. Oppressive, arbitrary or unconstitutional action any the servants of the government;

b. Wrongful conduct by the defendant which has been calculated by him for himself which may well exceed the compensation payable to the claimant; and

c. Any case where exemplary damages are authorised by the statute.”

In my understanding this criteria makes it clear that exemplary damages cannot be granted for the violation of statutory IP rights since the Patents Act, the Trade Marks Act and Copyright Act do not provide for the grant of exemplary damages. However for uncodified torts like passing off or disparagement, exemplary damages may be granted provided the wrongful conduct by the defendant is calculated to gain are more than the damages payable to the defendants (a hint of disgorgement of profits over here!).

“Furthermore – and perhaps most crucially – the punitive element of the damages should follow the damages assessed otherwise (or general) damages; exemplary damages can be awarded only if the Court is “satisfied that the punitive or exemplary element is not sufficiently met within the figure which they have arrived at for the plaintiff‟s solatium”. In other words, punitive damages should invariably follow the award of general damages (by that the Court meant that it could be an element in the determination of damages, or a separate head altogether, but never completely without determination of general damages).”

Before I conclude, I would like to present an ethical dilemma for the lawyers reading this post. As a lawyer arguing before Single Judge who is hearing your IP case ex-parte and appears to be willing to grant punitive damages on the basis of the Times Incorporated case, would you inform the said Single Judge of Justice Bhat’s judgment above?