Last Friday, the Delhi High Court passed an order in the case of Neetu Singh v. Rajiv Saumitra (order available here). This is a very interesting case, not only because of the unique fact situation, but due to the questions of copyright law that it throws up. I see this case as important as it provides clarity on how to tackle the question of ‘employment’ under Section 17 of the Copyright Act.

The Plaintiff filed this suit seeking to restrain the Defendants from reproducing/selling her literary work ‘English for General Competitions’ with the cover featuring her artistic work. The Plaintiff claims to be a renowned author in the field of education, training and educational consultancy, and provides coaching services as well. Defendant No.1 is her husband, who owns and manages ‘Paramount Coaching Centre’ – Defendant No. 2. The Plaintiff incorporated the Coaching Centre with the Defendant in 2009, and was a Director of the company from 2012 to 2014. The facts are disputed as to which party had initially founded the Centre. 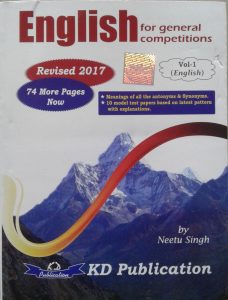 The Plaintiff authored a number of books from 2012-2014, one among which is ‘English for General Competitions – From Plinth to Paramount’ which is also published as is ‘English for General Competitions’ (to the left). She published these books through her proprietary concern – ‘Paramount Reader Publication’, and the obtained copyright registration in her name.

In December 2015, she learned that the Defendant No. 1 was illegally publishing books authored by her, and filed a police complaint – which lead to 6000 copies being seized by the Police. In June 2016, the Plaintiff then discovered that the Defendant No. 1 published Paramount Coaching Centre’s first book: “English for General Competitions – From Plinth to Paramount”, on which there was no mention of an author. The Plaintiff claims that this book is a verbatim copy of her original book, under identical title and illustrations on the front cover, with only a slight variation in colour. Further, it was submitted that the Defendant was selling the infringing books at half the price of her original work.

It was further argued that since the Plaintiff served as a Director of the company, she owed a fiduciary duty to the Coaching Centre. The Defendants relied on the Supreme Court decision of Ram Pershad and V.T Thomas for this argument, where it was held that a director of a company is not a servant but an agent of the company as a company acts through its directors. Further, this case noted that the nature of employment may be determined by the articles of association of a company and/or an agreement, if any, under which the contractual relationship between the Director and the company has been laid down.

On the other hand, the Plaintiff argued that since there was no contract of service between the two parties, she is the author of the book. Further, it was contended that the copyright registration serves as prima facie evidence of the same. It was alleged that the book was copied verbatim, so much so that even the printing errors in the Plaintiff’s book were reproduced.

While the Court accepted that the Plaintiff was working as a Director of the company from 2012 to 2014, it noted that the Defendants had failed to prove that the literary work was authored as part of her duties and obligations as a Director. Following the Ram Pershad decision, it was held that in the absence of an agreement, or the articles/memorandum of the company that might lay down the terms and conditions of employment – the Plaintiff was held to own the copyright in the works.

The Court briefly touched upon fair use in the context of the famed The Chancellors, Masters and Scholars of University of Oxford & Ors. v. Rameshwari Photocopy Service & Ors. (see here for our posts on the case). The Court distinguished works in the course of instruction that under Section 52, and works that were commercial in nature. Holding the present use of the Plaintiffs work to be commercial in nature, and with a profit motive – the Court granted an interim injunction in favour of the Plaintiff.

Section 17 of the Copyright Act

Section 17(c) of the Copyright Act inter alia provides that if a work was made by an author in the course of employment under a contract of service or apprenticeship ­– the employer shall be the owner of copyright, in absence of any agreement to the contrary.

Previous cases on Section 17 such as V.T Thomas & Ors. v. Malayala Manorama Co. Ltd. have consistently held that an employer has a statutory recognized copyright in any work that an employee creates during employment. In 2006, the Delhi HC in Diljeet Titus v. Mr. Alfred A. Adebare & Ors. observed that an employer-employee relationship could not be established in the absence of a written contract. The Delhi High Court in the 2009 case of American Express Bank Ltd. V. Ms. Priya Puri clarified that for American Express to claim copyright over their ex-employees work, the bank should have abridged, arranged and/or done something to material in the public domain to claim exclusive rights over it.