As per strict doctrine, interim orders are issued on the basis of a prima facie impression, to prevent “irreparable harm“, by virtue of a party’s actions, during the duration of the proceedings. But in effect, courts haven’t really been solving matters in accordance with settled doctrine, and have largely been sticking to settling matters, almost conclusively, through interim orders. 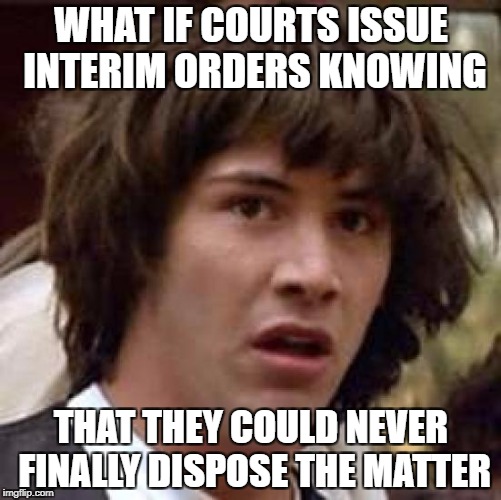 You can find considerable coverage on SpicyIP on the same here.

“Having read the order of the High Court of Delhi dated 10th March, 2017 passed in FAO(OS) No.1/2017 we find that it is virtually a decision on merits of the suit. We wonder if the High Court has thought it proper to write such an exhaustive judgment only because of acceptance of the fact that the interim orders in Intellectual Property Rights (IPR) matters in the Delhi High Court would govern the parties for a long duration of time and disposal of the main suit is a far cry.“

In fact, the SC went as far as to set aside the specific concerns in the relevant interim order that was under review, and chose to, first, deal with the”disturbing trend” of treating interim orders as final decisions:

“This is a disturbing trend which we need to address in the first instance before delving into the respective rights of the parties raised in the present case.“

Next, the SC directed the Registrar General of the Delhi HC to submit a report consisting of categorized data related to IPR suits, along with suggestions to remedy the issue:

The deadline for filing of the report was set for two weeks later (14th August).

The SC scheduled the next hearing for 16th August, on which date the bench has promised to not only look into the specific concerns of the interim order under review, but also consider the report directed to be filed:

You can refer to the entirety of the order on LiveLaw’s report (accessible here).