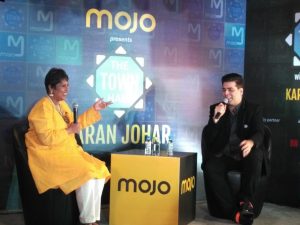 In what can only be described as ‘much ado about nothing’, a series of tweets were exchanged between Barkha Dutt and Nidhi Razdan over NDTV’s purported move towards mobile journalism and the use of the word ‘MoJo’ (abbreviation for ‘Mobile Journalism’) to refer to their ‘new’ form of journalism, which is similar to Barkha Dutt’s online platform ‘TheMojo’.

Barkha Dutt’s tweets were triggered by a news report, which talked about the downsizing of staff within NDTV due to financial constraints and the possible shift to ‘MoJo’ by NDTV. While Barkha Dutt’s response to the report suggests that NDTV has plans of deploying high-end mobile phones to capture and stream their journalistic content and naming this model ‘MoJo’, in the same series of tweets she also seems to take exception to a show by the name of ‘MoJo’, which NDTV has been running for a while. Thus, it is not fully clear whether Barkha Dutt’s concerns are limited to the launch of a new platform by NDTV or she is disgruntled even with NDTV’s running of the show ‘MoJo’.

Either way, Barkha Dutt was not too impressed with the use of the word by her former employer and slammed them for ‘appropriating’ her brand name. Nidhi Razdan of NDTV though retorted to this by stating that MoJo is a generic word that has widely been in use to refer to mobile journalism and NDTV has already been running a show under the name of ‘MoJo’ since December, 2016. Like a good journalist, Barkha Dutt was not one to back off and suggested that had she used one of NDTV’s show names, hell would have broken loose.

Before even getting into the possibility of trademarking a word as generic as ‘mojo’, it is interesting to note that while NDTV’s show (‘MoJo’) was launched on December 19, 2016, Barkha Dutt’s venture seems to have only taken off in April this year. Thus, it is apparent that NDTV’s show seems to have been in place even before Barkha Dutt’s venture and her claims of ‘appropriation’ does not hold much water, at least in relation to the show, which NDTV has been airing. Also, as claimed by Nidhi Razdan, the word ‘MoJo’ seems to have been in use for mobile journalism for a while now (see here and here). As far as her opposition to the launch of the new platform under the name of ‘MoJo’ is concerned, that too seems to be on shaky grounds.

As our readers are aware, while one can bring about a claim for trademark infringement in case of a registered trademark, an action for passing off can be initiated in the case of unregistered trademarks, which may have acquired secondary meaning and the public at large associates the mark with your product/services. In the present case, neither of the two actions (if initiated by Barkha Dutt) is likely to succeed for the reasons I will elaborate now.

A trade mark search for both Class 38 (telecommunications) and 41 (entertainment, education etc.) would reveal that neither NDTV nor Barkha Dutt seems to have a registered trademark over the word ‘mojo’ or have even filed an application for trademarking the same (do write in if you find anything to the contrary). In fact, while a number of marks containing the word ‘mojo’ have been attempted to be trademarked under Class 38 and 41, almost all the marks that have been attempted to be registered are used in combination with another word(s) and even after this, most of them have met with objections. Thus, Barkha Dutt’s concerns of her mark being ‘appropriated’ look completely out of place. Similarly, given the relatively short time span in which both the NDTV and Barkha Dutt shows have been on air, I highly doubt that the public have started to associate the word ‘mojo’ with either of their shows.

Coming to the larger question of claiming monopoly over generic words/phrases, the blog has, on multiple occasions, covered instances in which courts in India have categorically made it clear that no monopoly can be had over common catchphrases and/or terms (see, here and here). More recently, we had the instance of Times Group attempting to prevent Arnab Goswami from using the by now popular catchphrase ‘The Nation Wants to Know’. As Rahul and Prof. Basheer had made it clear in their respective analyses, the threshold for claiming monopoly over such commonly used phrases is extremely high, especially considering the lack of any unique features in them. While it might not be impossible to get a trademark over the word ‘mojo’, especially if it is used in combination with another word and in connection with a particular good/service (as in the case of ‘Music Mojo’ and ‘Mojo Rising’, which have been accorded registration and are used in relation to the entertainment industry), the probability of getting registration for the word ‘mojo’ bereft of any additions to it seems difficult (in fact, the registry search shows an instance of the word ‘mojo’ being attempted to be registered and objected to). Thus, in conclusion, much like many of the journalistic outbursts we are accustomed to, this one seems to be a hollow tirade with not much mojo to it.