Last week, Indian media was abuzz with the news of High Fashion brand, Christian Dior having allegedly plagiarised certain designs from a small, Indian art collective and store known as ‘People Tree’. According to reports – which carried allegations raised by the collective – Dior’s Cruise 2018 collection contained a dress that contained exact reproductions of the Block Printing designs created, and sold by ‘People Tree’ in India. This would have gone wholly unnoticed if not for the January Issue of Elle India, which featured Bollywood Actor, Sonam Kapoor on the cover, wearing the aforementioned dress. When this issue of Elle India surfaced, the infringement was brought to the notice of ‘People Tree’, who then widely took to the media to call out Dior’s plagiarism of their work.

To outline the crux of the issue, I’ve reproduced the following image (that formed part of their social media campaign) from the instagram account of Pakhi Sen, daughter of Orijit Sen and Gurpreet Sidhu – the founders of ‘People Tree’ : 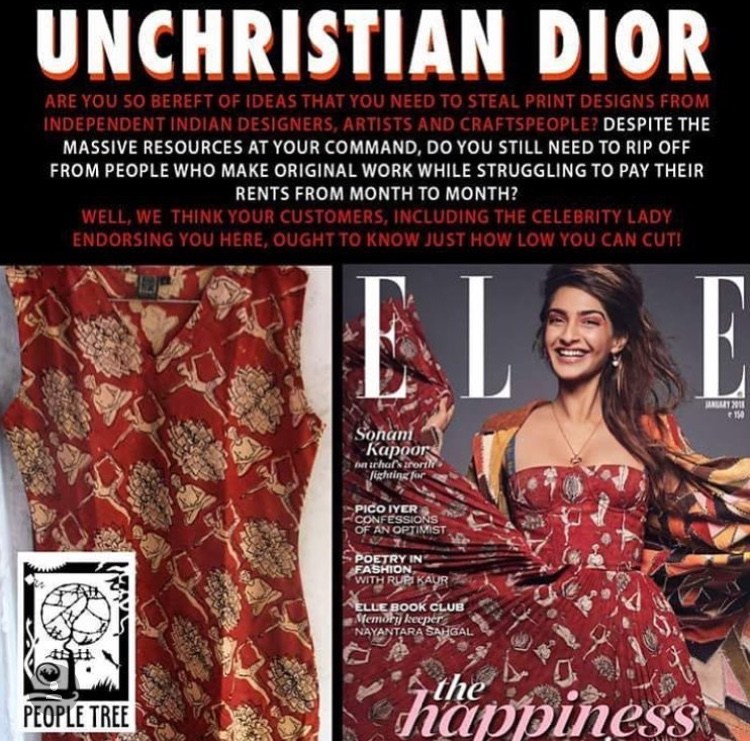 Now, that we have some sort of context in place. Let’s start at the very beginning.

Who are the ‘People Tree’ and what do they do?

‘People Tree’ began 25 years ago, simply as a creative space. It was an initiative by Orijit Sen & Gurpreet Sidhu, two design graduates, who wanted to curate a space for free, inspired creative expression. Soon, the collective – which had by then become “a meeting ground” for many likeminded artists and creatives – blossomed into a socio-commercial initiative. By that, I mean that the art created by artists is just one part of a wonderful process. The artwork created by the artists of ‘People Tree’, is taken to Rajasthan where the artists help the artisans in carving their works into blocks. Once that is done, the block printing is done on fabric, which is then dyed with natural dyes. After that, this finished fabric is sent to be stitched into garments by socially marginalised women’s and children’s groups. The block-printing technique used by ‘People Tree’ has its origins in Kaladera, Rajasthan and was introduced to Sidhu & Sen in 1992. (For more insight into this laudable initiative, please see here, here and here)

Therefore, the income generated by the sale of these finished garments (according to this report, pieces containing the particular yoga-design copied by Dior sell for about Rs. 1500) is split between all these different stakeholders. As noted from above, these include – the artists, the artisans and then finally the women’s and children’s groups that are responsible for tailoring the fabric.

In order to even begin the conversation on potential IP protection for the unique garments created by ‘People Tree’, it is important to draw out the subject matter that qualifies for such protection. This is important not only to know what sort of IP one is attempting to protect, but also to clearly understand the contours of protection offered by the applicable IP laws.

In my opinion, the first two qualify as subject matter protectable under Intellectual Property Laws. Further, in the present case, as far as I have gathered from media reports & from my conversations with Pakhi – Dior’s copying has been of the artwork only.

Copyright Infringement of the artistic work

Orijit Sen’s artwork would qualify as an “artistic work” within meaning of Copyright Law and would also grant in favour of its owner (here, Orijit Sen) exclusive rights flowing from the same. This includes both moral and economic rights interalia including rights against unauthorised reproduction, creation of derivative works, publication; right to be associated as the “author” of the work and right against mutilation or distortion of the work.

To make out a case for infringement, ‘People Tree’ would have to show that their artistic work qualifies as protectable subject matter in the jurisdiction concerned i.e. (in most cases) that it is an original expression of an idea. Having done that, it then has to establish that there has been substantial copying of their original, artistic work, amounting to infringement of the exclusive economic rights granted by Copyright Law. What is “substantial” copying would vary depending on the jurisdiction again, but in the present case, being that the Dior design appears to be such a blatant rip-off of the ‘People Tree’ artistic work, outlining the substantive part of this should be fairly simple. Notwithstanding the trickier bits of this whole deal would be questions of jurisdiction, evidence, and just literally taking on a Giant armed with nothing but limited resources and a clean conscience.

It is the second element that I outlined above, that makes this whole issue more nuanced. Although, as I have previously conceded, this isn’t in direct issue in the present case (or is it? Open to contrary viewpoints) – it is an important conversation to have in the interest of the stakeholders that are involved. I say this because this isn’t the first time that commercial establishments – whether they be foreign or Indian – have attempted to appropriate traditional forms of expression. Such a practice is particularly rampant within the fashion industry, where High Fashion Brands often pick up techniques or artistic works from developing, culturally rich communities and countries and parade them as their own creations. Internet archives are littered with examples of this, see here and here.

So, the question is: what is the best way to protect Hand Block Prints (or similar techniques) – against appropriation? Assuming it falls under the definition of “Traditional Cultural Expressions” would Intellectual Property Laws even be the appropriate method of protecting them under law?

Traditional Cultural Expressions (TCEs) do not have a tangible definition under law, at least at present. However, the Intergovernmental Committee on Intellectual Property and Genetic Resources, Traditional Knowledge and Folklore (IGC), which is trying to carve out an international legal framework for the protection of TCEs, describes TCEs as including, interalia – handicrafts, music, art, designs, ceremonies that form part of the identity or heritage of a traditional or indigeneous community; and/or has been passed down across generations. While the IGC attempts to work out an appropriate framework for the same (see the most recent Draft Article on TCEs adopted at the 34th session of the IGC as held between the 14th and 16th of June, 2017 here), this paper here documents examples of national, sui generis attempts at protecting these TCEs. As the paper highlights, countries that boast of a wide spectrum of TCEs from all of the traditional and indigenous communities that belong to these places, have provided for means of protecting these cultural expressions outside the scope of IP protection.

The argument (expanded here and here) is that TCEs often struggle with IP. A demonstration (albeit an extremely watered down one) can be made, using the ‘People Tree’ example:

It is precisely for this reason that we need to revisit the legal framework as applicable to TCEs – and perhaps restart the conversation that we’ve been putting off for a while. It could start with some basic questions – what exactly qualifies as “Traditional Cultural Expressions” in India? Would age-old handicraft techniques such as Hand Block Printing come under that definition (see here)? Especially since there is substantial commercial exploitation of such techniques in order to generate incomes for the communities involved in the process, unlike TCEs belonging to indigenous communities across the world, that are (usually) against any and all commercial exploitation of the same? Assuming the goal is to ensure funds reach such stakeholders of TCEs, what is the best way to protect them against appropriation by huge, commercially successful establishments of developed countries?

Of course, this case involving ‘People Tree’ is much more than that: being that it highlights the perils, not just of cultural appropriation, but also of simple appropriation of works that are the direct result of originality, passion, drive and hard work. In any case, the conversation warrants attention. Let’s not forget that it began with Turmeric and Basmati, and continues to lurk in the shadows.

*My thanks to Pakhi Sen for being kind enough to respond so patiently, and in so much helpful detail, to all of my million questions on the subject.