We’re pleased to bring to you an interesting guest post by Dr. Sunanda Bharti. Dr. Sunanda is an Assistant Professor in Law at Delhi University. She has written a guest post for us in the past as well, which can be viewed here.

Is Braille a ‘Language’ Capable of Translation, Reproduction or Adaptation under Copyright Law? 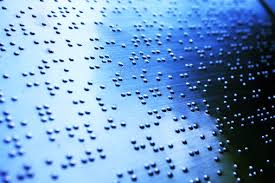 It is ITC’s advertisement in which the leading health and hygiene brand, Savlon is shown introducing Braille enabled packs of Savlon Antiseptic Liquid that reignited my interest in Braille. The occasion was the World Sight Day, which is celebrated every year on the second Thursday of October to draw attention on blindness and vision impairment. WSD 2018 fell on 11th October, 2018.

Though the news would prompt a legal mind to think about trademark law, it is copyright law that is the subject of this post. I would want the reader to think about the following questions and issues-

1) What is Braille for copyright law purposes? A ‘language’ or something else? If a literary work is converted to Braille, is it translation?

2) If a literary work is converted to Braille, can the nature of the activity be adaptation or reproduction?

Answer to question 1 – What is Braille? A language or something else? If a work is converted to Braille, is it translation?

Braille is not a language. It is a tactile reading and writing system used by blind and visually impaired people who cannot access print materials. It uses raised dots to represent the letters of the print alphabet. It also includes symbols to represent punctuation, mathematics and scientific characters, music, computer notation and foreign languages.

It is obvious that Braille is used to enable the visually challenged to review and study the written word—irrespective of the language in which the word might be originally written.

Understood thus, Braille becomes a universal code for all languages.

Now is where the matter becomes interesting. Since Braille is not a language, the word ‘translation’ cannot be used in its context (though the term is randomly and loosely used in respect of Braille). Translation is commonly understood as conversion of a work in a language other than the original one. One can only translate a language into another language.

To elaborate, if I, being the author and owner of a copyrighted literary work, want to convert my work into Braille, the output would not be a translation. For instance, if I write ‘aap kaise ho‘, which is essentially Hindi, using the Roman script (as mentioned), it still remains Hindi, not English–it is transliteration and not translation. In order for it to qualify as ‘translation’ in English, it should be worded as ‘How are you?’. In Braille, the exact same thing is reproduced using the six dots writing system–it qualifies as transliteration at the most, and not translation. Hence, technically speaking, if  someone else, say VillanX—to keep things interesting, unauthorisedly converts my work into Braille, section 14(a)(v) rights are not violated.

For the purposes of this Act, ‘copyright’ means the exclusive right subject to the provisions of this Act, to do or authorise the doing of any of the following acts in respect of a work or any substantial part thereof, namely:—

(a) in the case of a literary, dramatic or musical work, not being a computer programme,—

(i) to reproduce the work in any material form including the storing of it in any medium by electronic means;

(ii) to issue copies of the work to the public not being copies already in circulation;

(iii) to perform the work in public, or communicate it to the public;

(iv) to make any cinematograph film or sound recording in respect of the work;

(v) to make any translation of the work;

(vi) to make any adaptation of the work;

(vii) to do, in relation to a translation or an adaptation of the work, any of the acts specified in relation to the work in sub-clauses (i) to (vi).

The act of converting my literary work into Braille may count under any of the boldened ones above. Translation has been ruled out above. Let me deal with the other two one by one.

Answer to question 2 – if a literary work is converted to Braille, what is the nature of the activity— adaptation, reproduction?

Does conversion of the stated literary work amount to adaptation under section 2(a)(v)? May be. The answer does not come easy, given the ambiguity in the expression ‘rearrangement or alteration’. If conversion of the work into Braille is taken as ‘rearrangement or alteration’ of the original work, the output may be taken as adaptation. And in such a scenario, the exclusive right to adapt my literary work into Braille would remain with me. Meaning, my section 14(a)(vi) rights would be violated by VillanX.

That brings me to the last query. Does producing such Braille version of my literary work amount to ‘reproducing the work in any material form’ under section 14(a)(i)?

Though I am inclined the most towards this answer, the difficulty does not get settled easily either. Because, in reproduction, whether one should remain true to the content or true to the expression, or both, is debatable. Conversion of my literary work into Braille is being true to the content but not expression, in the technical sense, because the copier (VillanX) would be copying the exact literary content, albeit not in the original language but into the six-dot Braille code/script.

Similarly, if reproduction is taken to mean making copies without change, conversion into Braille would not amount to reproduction by VillanX. He is safe.

Some clue towards harmonious interpretation given by ‘accessible format’

The new amendment in Section 52(1)zb uses the expression ‘accessible format’. It saves adaptation, reproduction, issue of copies or communication to the public of any work, in any accessible format, from being branded as infringement. This has been ensured in public interest.

This guarantees that when the VillanX produces a Braille version of my literary work to facilitate persons with disability to access the work for private or personal use, educational purpose or research, I cannot say that it’s infringement of my work.

The Explanation regarding ‘accessible format’ in Rule 77 of the Copyright Rules, 2013 for the first and perhaps the only time uses the word ‘Braille’. It states that the term ‘accessible format’ shall include Braille, Daisy, large print, talking books, digital formats and all other formats that can be used by persons with disabilities.

Section 52(1)(zb) also throws light on what Braille is, for the purposes of the Copyright Act. It is notable that the opening words of the sub-section state thus: “the adaptation, reproduction, issue of copies or communication to the public of any work in any accessible format, by—…”.

The above seems to suggest that the expressions, (i) adaptation, (ii) reproduction and (iii) communication to public can be used in respect of Braille as well (amongst other accessible formats). This means that when Braille version of copyrighted works are produced, either adaptation or reproduction takes place. This understanding generates some clarity on section 2(a)(v)–understanding that Braille does fit into the definition of adaptation as it seems to qualify as ‘use of any work involving its rearrangement or alteration’. It also offers clarity on section 14(a)(i)–understanding that Braille also fits into the scope of ‘reproduction’.

It is strange that one talks of various rights under the Indian copyright law in favour of the disabled, including visually challenged. There are celebrated provisions introduced in the Indian Copyright Act in 2012, such as (1) fair dealing exception for the disabled; and (2) compulsory license for making works accessible to the disabled. However, one hardly finds any literature on the exact scope of such rights in the context of Braille. As elaborated above, one can discern that even the most basic of expressions, such as translation, adaptation and reproduction become a subject of detailed (and hopefully engaging) study.