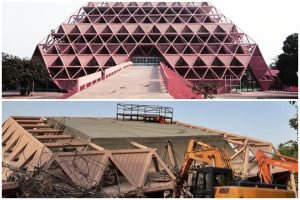 We’re pleased to bring to you a guest post by Dr. Sunanda Bharti. Dr. Sunanda is an Assistant Professor in Law at Delhi University.

Heritage, Hall of Nations and Assertion of Moral Rights

The Hall of Nations was ultimately demolished by the Government in April 2017. It was the modern world’s first and largest-span space-frame structure built in reinforced cement concrete. The building stood at Pragati Maidaan, in Delhi, for the past 5 decades.

Inaugurated in 1972, to commemorate twenty-five years of country’s independence, its demolition witnessed widespread condemnation by architects and historians, a lot of hue and cry from the public, and political rhetoric. Unfortunately, all were emotional appeals and not reasoned arguments.

The Delhi High Court’s refusal to see it as a heritage structure—‘not older than 60 years’ had some  logic to it, but only ‘some‘; for no one approached the court with copyright issues involved in the situation. This post seeks to highlight the same.

It is notable that the structure-Hall of Nations-was managed by the India Trade Promotion Organisation, which is part of the Ministry of Commerce and Industry. The architect of the Hall of Nations, Mr. Raj Rewal is a renowned figure, who along with Mahendra Raj, the structural designer, worked closely to realise the edifice. It was an extraordinary construction because the designer-architect duo used the space frame design not only for the roof but also for the inclined anchoring walls, creating an interior space, uninterrupted by columns and pillars, that were 246 x 246 feet in length and breadth, and 81 feet high. For the purposes of Copyright Act, it was what the Act calls a work of architechture.

Where Do Works of Architecture Fit into Copyright Law?

The building or structure which constitutes a work of architecture is built on the basis of a plan (blue print) which enjoys a separate copyright apart from the copyright in the building. Publication means making a work available to the public by issue of copies or communicating the work to the public. Communication to the public includes making the work available for being seen by any means of display. This means that the moment a work of architecture is exposed to public view, it would amount to publication of the work. An application of the above principles would reveal that the Hall of Nations was indeed an architectural structure already exposed to the public and hence a subject matter of copyright.

Ownership of Copyright in Architectural Works

The author of an artistic work (other than a photograph, but including a work of architecture) is the artist whose hands created the work and is, therefore, the first owner of the copyright.

Section 17 of the Copyright Act, 1957 clearly states the law on ownership. It provides that barring the provisions of the Act, the author of a work shall be the first owner of the copyright. This is the general rule. It has exceptions. Confining the section only to artistic works within which architectural works fit, the provision states that in case the architectural work is created and designed by the designer and architect when the latter were in the course of employment under a contract of service or apprenticeship, it is the employer who shall, in the absence of any agreement to the contrary, be the first owner of the copyright in the created work.

Who Owns Copyright in Hall of Nations?

In case of Hall of Nations, even if the designer-architect duo was on the government rolls for that time, still in the absence of any contrary agreement, the employer (government owned ITPO) would be the first owner of copyright in the building. Other probable clauses applicable are ss 17(d) and (dd). In all the three seemingly applicable clauses—sections 17(c), (d) and (dd), it is either the employer, or the government or the public undertaking that seems to be the first owner of copyright in the creation. Transposing the above to the Hall of Nations, it appears that since the structure was managed by the India Trade Promotion Organisation, which is part of the Ministry of Commerce and Industry, who appointed Mr. Raj Rewal and Mahendra Raj to construct and design the building, it was a commissioned work sponsored by the Government. Irrespective of what clause (of section 17) is applicable, in the absence of a specific contract, first ownership of the work does not vest with the designer-architect duo. So, the first ownership belongs to the government and is likely to remain so for many more years. Why the hue and cry then? It is because, absence of economic rights under section 14 do not imply absence of moral rights in the work.

Moral Rights – What About Them?

The designer-architect duo may not be the first owners of copyright in Hall of Nations; it does not however mean that they have forfeited their moral rights in the work as well. Section 57 of the Copyright Act deals with the special rights of the authors, also referred to as the moral rights of the creator of the work and includes the rights of integrity and attribution of the author. To claim authorship of the work; and to restrain or claim damages in respect of any distortion, mutilation, modification or other act in relation to the said work which is done before the expiration of the term of copyright if such distortion, mutilation, modification or other act would be prejudicial to his honour or reputation, is the moral right of any architect-designer in respect of the building created/designed.

The case of Hall of Nations is, in the opinion of the author no different from the celebrated case of Amarnath Sehgal v. Union of India (2005 (30) PTC 253). Shri Amarnath Sehgal, a celebrated sculptor was commissioned in the year 1957 by the Government of India to create a bronze mural for Vigyan Bhawan in Delhi. The bronze sculpture in question was about 140 ft. span and 40 ft. sweep and had taken five years to complete. It was placed on the wall of the Lobby in Vigyan Bhawan. However, in 1979, the mural was pulled down and consigned to the storeroom of the Union without notice, permission or authorization of Mr. Sehgal. When Mr. Sehgal came to know of this ill treatment, he made representations to the government authorities for restoration of the mural, which fell on deaf ears. Upon a suit being filed on the basis of moral rights, the Delhi HC held that the UOI had not only “violated the plaintiff’s moral right of integrity in the mural but also violated the integrity of the work in relation to the cultural heritage of the nation.” It maintained that the mural, was “too precious to be reduced to scrap and languish in the warehouse of the Government of India.” The sculptor, it was held, had a right to be compensated for loss of reputation, honour and mental injury due to the offending acts of the defendants.

Demolishing a renowned building as the Hall of Nations, which marked a certain milestone in the progress and development of new India can be clearly analogized with pulling down of the celebrated mural from Vigyan Bhawan. Just as in Amarnath Sehgal, the ruthless manner in which a celebrated creation has been destroyed mars the reputation of the architect Raj Rewal and engineer Mahendra Raj. Its demolition should have been protested by the two, on grounds of violation of moral rights.

In the author’s opinion, in the context of architectural buildings, one has to understand section 57 to read that any alteration or demolition of the concerned structure amounts to derogatory conduct. And if the structure in question is as esteemed and distinctive as the Hall of Nations, then it does amount to violation of authors’ moral rights.

The sad episode of the Hall of Nations should serve as a lesson for the future architects to be proactive in order to maximise protection over their works. It is suggested that while entering into an agreement with a client, an architect should be mindful of possibilities of future alterations and demolitions. Though the Copyright Act provides for  moral rights in respect of architectural works as well, we have not yet seen the practical application of this law. If architects are upbeat about this important right of theirs, the protection cover of moral rights is likely to act as an invaluable tool in protecting their reputation and livelihood. This becomes all the more important for architects who design highly visible works like the Hall of Nations.

The Argument of Eminent Domain

One last issue worth noting in relation to this controversy is that of ‘Eminent Domain’. Doctrine of ‘Eminent Domain’ recognizes the superior right of the government to take over any property in the interest of general public. This is to be done only after compensating the land owner of such property. In the case of Hall of Nations, the land on which the Hall was constructed was already a government property. Hence, the common way in which eminent domain is generally understood did not arise. Does this however mean that right of ownership of land in the Sovereign can be allowed to override moral rights? It would amount to making section 57 of the Copyright Act infructuous.

The author submits that after assignment of copyright, the residuum of rights which remained with the architect/designer were of a variety that could not be throttled by Eminent Domain or anything else, and should always be banked upon to protect demolition/alteration of architectural creations. Unfortunately, the position of law in India on this point has not been deliberated and hence the law doesn’t seem to provide adequate protection to works of architecture in reality.