‘Access to medicine’ activists at MSF are kicking off yet another campaign to increase access to Janssen’s new drug bedaquiline. Based on a new study and a new set of guidance from the WHO, the activists want the government to give all multi-drug resistant TB patients in India access to bedaquiline. A recent piece published on India Spend, with “support from MSF”, interviews the lead author of an earlier study of bedaquiline in light of a more recent study in the Lancet Respiratory Medicine to make the case for the government of India to ramp up bedaquiline for all Indian patients. (This paragraph has been edited after initial publication to correct the identity of the author who was interviewed.)

Like most of the advocacy around bedaquiline, the reporter who conducted this interview Swagata Yadavar takes the familiar, incorrect line of questioning by asking Dr. Francesca Conradie, the PI of an earlier study on Bedaquiline, whether the drug should be made available in light of the Indian government’s concern that drug resistance would increase by making bedaquiline available to more patients. However, as I have explained, repeatedly, on SpicyIP, the government is on oath before the High Court of Delhi stating that there are safety related concerns with bedaquiline since it has demonstrated cardio-toxicity. Yadavar is aware of the affidavit and our writing about bedaquiline because she links to SpicyIP’s copy of the affidavit (the URL literally had Balaji’s name) in her interview which most likely means she is aware of the debate on the issue. But like all good ‘activist-journalists’ she sidesteps the most obvious tough questions on cardio toxicity and the deaths in the Phase 2 trials. She does pose a softball question towards the end of the interview about the “safety of new TB drugs” without raising the issue of the deaths in the clinical trial or the lack of enough data on efficacy of the drug or the ongoing Phase III trials. There is not a single mention in the interview of the comments made by John Walker, the Nobel Prize winner, to the ET’s reporter Divya Rajagopal, on how more safety and efficacy data is required to ramp up access to bedaquiline. (This paragraph has been edited after initial publication to correct the identity of the author who was interviewed.)

(I don’t quite understand the rationale of comparing 1016 patients with 18,601 patients.)

While I don’t have access to the entire study, the point to be noted is that these studies on mortality are quite different from efficacy related studies where there is evidence of sputum conversion i.e. proof that the drug has actually worked on the disease. The only way we will have substantive evidence of bedaquiline’s efficacy is if we await the results of the Phase III trials and as demonstrated in the case of delaminid, the results of Phase III trials can be very different (disappointing) from Phase II trials. The second point that should be noted with regard to the study on mortality rates, is that as per the WHO guidelines, bedaquiline is given in very controlled circumstances, wherein patients are admitted to the hospitals, constantly monitored and administered a proper diet. The existing medication consumed by TB patients in their home without necessarily being admitted to hospitals which also means that they are less likely to have a proper diet and monitoring regarding their medication. 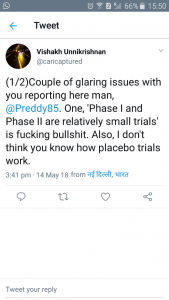 This is not to belittle the study but point out that it can only form one component of the overall decision to approve bedaquiline – the swing factor will still have to be proof of efficacy in the Phase III trials. Decisions to approve new drugs are done by balancing benefits with risk – a drug with risks associated can be approved if it efficacious. But those decisions can be made only when there is sufficient evidence. And no matter what the MSF folks (the tweet on the left was directed at me by MSF’s crack social media team in India, presumably, with the blessings of MSF’s India head Leena Menghaney who refused to reply to my email pointing out the need for civil discourse) may say, the Phase 2 trial for bedaquiline was certainly a small study. If they can force the government of India to make public the efficacy data of the drug as administered on over 1000 Indian patients at Indian government hospitals they may have a better case to argue that the efficacy of the drug outweighs its risks.

Even presuming that the government does bite the bait and ramp up the use of bedaquiline without waiting for the Phase III data (it has already started), there remains the question of the informed consent form & patient information booklet designed by the Ministry of Health. In earlier posts, we’ve pointed out some serious issues with the information consent process, such as the forceful requirement to give up right to compensation and the lack of information that the data is being shared with Janssen. But I’ve discovered even more issues with the government’s form when compared to the format recommended by the WHO information booklet. You can read the WHO’s information booklet for bedaquiline over here. The very first piece of information provided to patients by WHO is the following:

“Bedaquiline can cause serious side-effects.

The first warning about the deaths find no mention in the Indian information booklet. The second problem is mentioned in the Indian document but in a muted manner.

Under the heading of possible-side effects of bedaquiline the WHO prescribed format reads as follows: “

It is possible that it may also cause some problems that we are not aware of. However, you will be observed closely for any unwanted effects or any problems. Other medicines may be administered to decrease the symptoms of the side-effects or reactions.”

The Indian information booklet has no mention of side effects on the liver and the issues with heart rhythm are listed as “common side effects” along with nausea and joint pain – there is no effort to use language that conveys just how serious the effect can be on the heart. Similarly, there is no mention that doctors don’t yet know all the side-effects of the drug.

Regarding information on monitoring for side-effects, the prescribed format by the WHO informs patients the following: “You will need the same monitoring test that all patients on MDR-TB treatment need. In addition, you will need heart monitoring, extra blood tests for the liver and your electrolytes”. Again, there is no mention of this in the Indian form.

All of the above are serious defects in the information that was given and is being given to Indian patients on bedaquiline. Not so long ago, there was a massive outrage on the issue of informed consent when the HPV vaccine was administered to minors. NGOs took the issue up till the Supreme Court and it became a big deal. Today, we have enough evidence that the government (Dr. Soumya Swaminathan, currently at WHO, was part of the committee that approved this faulty information booklet) of India has cocked up the informed consent process by preparing a faulty information booklet. While the government is not bound by the WHO’s recommendation, it is clear that the most damaging information was held back from Indian patients and that is in violation of the prescribed format for ‘informed consent’ laid down in Schedule Y to the Drugs & Cosmetics Rules, 1945.

I’m quite sure all the activists operating in the ‘access to medicine’ space and lobbying for increased access to bedaquiline are aware that the informed consent form is massively flawed but they won’t make an issue of it. Why is this so?

The answer is simple. Single-issue activism focuses only on one aspect. In this case, access to medicine activists are focussed only on increasing access to medicine and nothing else. They are concerned with nothing else other than the one issue that they are paid for because their incentive structure, both individually and institutionally are designed in this manner. And that is why I’m always suspicious of activism. I hope somebody with the resources to take on this battle, makes an issue of this before the government of India ramps up access to bedaquiline to even more patients. If Indian citizens are being given drugs that are not tested, the least the government can do is inform them of all the associated sideffects.