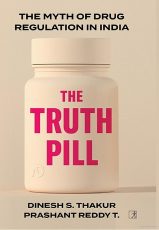 We are thrilled to review Prashant Reddy’s new book on the Indian drug regulatory system! Co-authored with Dinesh Thakur their book – The Truth Pill – The Myth of Drug Regulation in India  was released this October.

Given that drug regulation has a direct nexus to public health, maybe even more than patents, several years ago, Shamnad, Prashant and Sai started a new initiative on SpicyIP to throw more light on India’s drug regulatory framework.

Since then such issues have been covered on SpicyIP e.g.  Natco’s Albupax, the manner in which Bedaquiline was approved by the DCGI, manufacturing issues related to oxytocin. This book is a deep dive into various other issues making it a foundational read for anyone interested in public health.

Book Review: ‘The Truth Pill: The Myth of Drug Regulation in India’

This article was originally published on Bill of Health, the blog of Petrie-Flom Center at Harvard Law School.

The Truth Pill, authored by Dinesh Thakur and Prashant Reddy, is a monumental work that convincingly shows that drug regulation is but a myth in India.

In their investigative style, the authors explain drug regulation in India through the lens of history, both Indian and global. The book’s combination of history and contemporary issues makes for an immersive and compelling read. It may, however, leave you feeling frightened, given the dysfunctional regulatory system in India and the impact this can have on patients around the world. However, the book not only highlights problems but also offers several well-thought-out and actionable paths to reform.

The book was released in October, in an ominous coincidence with news of the death of nearly 70 children in Gambia, West Africa due to the consumption of cough syrup contaminated with diethylene glycol (DEG), which had been made in India. As it happens, the prologue narrates historical regulatory failures that have led to an “epidemic” of DEG poisoning in India, almost predicting this terrible incident in Gambia. India has had at least five major cases of DEG poisoning in the past. Most recently, in 2020, 11 children in India died of DEG poisoning. The book explains that despite these events, DEG adulteration continues due to regulatory failures.

This is only one example of the deep rot within the system. As explained across various chapters, a frightening number of quality-related violations, abysmal prosecution rates, low to no punishments, and slow to no changes are characteristic features of the system. In fact, before publishing the book, the authors petitioned the government, highlighting glaring regulatory issues, but the government turned a blind eye.

The book relies on primary sources of information — mainly government reports, judicial decisions, and government data. The final product is a result of grit, determination, and several years of data gathering. Accessing information related to government agencies and departments is not easy and such opacity feeds into the failures of the regulatory system in general. As revealed in the book, the authors had to fight with the drug controller before the Delhi High Court for over two years to compel the release of a damning government report on suspicious drug approvals. The authors have made their rich collection of resources available online.

The book contains eleven chapters that provide a complete picture of the drug regulatory landscape in India. The first two chapters provide historical context to drug regulation globally and in India. Incidents that led to states stepping-in to regulate drugs are explored. Topical issues such as traditional medicine and Ayurveda are explained in detail in chapters seven and eight. These chapters throw light on interesting aspects of Ayurveda and related regulatory, safety, and other concerns. Chapters three to six explore significant regulatory gaps and failures around NSQ (not of standard quality) drugs, gaps in safety and efficacy requirements for new drugs, regulatory failures related to generic medicines, and issues with prosecutions and punishments for regulatory violations. The authors also discuss supply chain aspects of the system, including online pharmacies and issues with branding and drug advertisements. The Truth Pill concludes by offering several possible paths to reform.

Despite being called the “the developing world’s pharmacy,” Indian drug regulation has been under-covered and under-studied, and occupies little space in public debate. This book changes that and pushes the issue into the spotlight.

The Truth Pill has created significant excitement in India and the authors have been interviewed by several leading Indian journalists and media houses. Indeed, it is a must read for those interested in drug regulation, as regulatory failures impact not just India but also its trading partners.