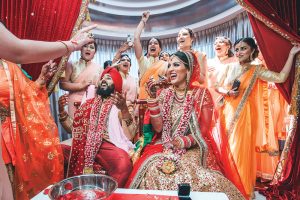 Indian weddings are an expensive affair- a recent survey reports that 20% of all loans taken by young Indians in 2018-2019 was to fund their wedding expenses! It comes as some respite then for betrothed couples that the Indian Copyright Office has recently clarified (in a Public Notice No. 10-26/2019-CO) that licences are not required for utilisation of sound recordings in the case of marriage related functions.

“the performance of a literary, dramatic or musical work or the communication to the public of such work or of a sound recording in the course of any bona fide religious ceremony or an official ceremony held by the Central Government or the State Government or any local authority.

Explanation-For the purpose of this clause, religious ceremony including a marriage procession and other social festivities associated with a marriage.” [Emphasis supplied]

The notice clarifies that use of sound recordings in the course of a religious ceremony including a marriage procession and other social festivities associated with a marriage does not amount to copyright infringement and therefore, does not require a copyright licence.

The copyright exception itself is straightforward, however, it does give rise to some food for thought.

The Public Notice by the Copyright Office is in the nature of a clarification, this means that even prior to the clarification being issued, the legal position was that the use of musical works for any religious ceremony does not require a copyright licence. It seems, however, that this is not how it played out in the real world.

In some cases, wedding venues and event management companies in India insist on fees for paying for copyright licences for music played at weddings or sangeet ceremony. The website of The Wedding Company (a wedding planner in India) lists out the different kinds of licences required for one’s wedding. The website currently states that the music-related licences required for wedding/sangeet ceremony are Phonographic Performance Limited licence or a Novex licence for DJ, and an IPRS and ISRA licence for live performances. It is a common practice for a venue hosting an event (involving use of copyrighted music) to require proof of licence to use the music from the event organiser; this is because under section 51 of the Copyright Act, even a person who permits for profit the use of any place for communication of a copyrighted work to the public such that the communication amounts to copyright infringement, is liable for copyright infringement [emphasis supplied].

Interestingly, I found two instances (here and here) where it was reported as early as April 2018 that copyright licences are not required for weddings and wedding related events. As one of these websites states, this clarification came from DPIIT (then DIPP).

While the Copyright Office’s Notice clearly confirms that there is no requirement for a copyright licence in the course of any marriage related ceremony, some grey areas still remain. For instance, will music played at sangeet (a pre-wedding event in Hindu marriages where the bride and groom’s families sing and dance together) be covered under this exception? In this article, Isha Tewari argues that because of section 52(1)(k), playing of music in sangeet only in an enclosed room or hall (not being a hotel or commercial establishment) or as part of the activities of a non-profit club or similar organisation may be covered. However, I disagree with this view because the clarification has been issued with respect to section 52(1)(za) of the Copyright Act and specifically exempts the communication of a sound recording in the course of any bona fide religious ceremony without placing constraints based on whether the venue in such cases is not for profit. In my opinion, sangeet being “other social festivity associated with a marriage” is covered by the exception.

Thanks to Quora, I stumbled upon an interesting judgment of the Punjab and Haryana High Court in Phonographic Performance Ltd. v. State of Punjab (Civil Writ Petition No.7772 of 2011 (O&M)), a case which involved a copyright claim by Phonographic Performance Ltd. (PPL) against Light Sound and DJ Association, Amritsar for payment of royalties for a DJ performance in a marriage hall. The DJ association relied on the copyright exception in section 52(1)(za) to argue against payment of royalties to PPL. The P&H HC dismissed the DJ Association’s claim and observed as follows:

“[…] It would make no difference, even if it were to take place in a religious ceremony. A sound reproduction by a DJ performing at such an event is surely a function that is connected to marriage. It is not as if a DJ’s performance amounts to conducting the marriage. Marriage is definitely different from the functions connected to the marriage and the tariff regime applies to performances at such functions even if it has a religious overtone.” [Emphasis supplied].

I believe that the P&H HC interpreted the copyright exception too narrowly. Going by the court’s logic, even baaraat and sangeet would not be covered as they are (to use the court’s language) functions connected to marriage but do not amount to conducting the marriage. As such a restriction has not been placed in the copyright exception, it would be wrong to do so by way of judicial interpretation.

Thank you Balu and Prashant for raising some interesting issues on this development.