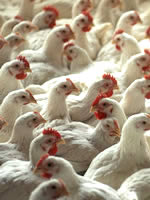 One of the first posts on this blog related to Avian Flu. Little did I know that I would have to post again–as the notorious bird flu makes it way to India. As expected, it has brought with it the patent controvery as well. A news item states:

“The bird flu threat has become a litmus test for the government on how it would use the patent law flexibility to cope with a public health issue that could potentially be a national emergency.

Pharma companies like Cipla and Ranbaxy, willing to produce their versions of Roche’s influenza drug Tamiflu (oseltamivir), are at risk of liability suits because they don’t have the consent of the patent-holder.

Roche holds product patent on Tamiflu, the most-effective known drug for avian flu, in the western markets and process patents in India. The Swiss drugmaker had given the licence to manufacture and market the medicine to only one Indian company- Hyderabad-based Hetero Drugs. In case of a pandemic, it is uncertain whether Hetero will have the capacity to produce the medicine in sufficient quantities.”

What troubles me is the following comment in the news report:

“Given that Roche has process patents in India, any company that produces/markets the the drug without authorisation by the patent-holder is liable to suits, an industry source argued”.

Come on–don’t all of us know the international reverse engineering reputation of Indian pharma manufacturers that can work around the most difficult of process patents. I have highlighted and this and other aspects in a recent article co-authored with a colleague, Tahir Amin. I reproduce the abstract and the conclusion below:

TAMING OF THE FLU: WORKING THROUGH THE TAMIFLU PATENTS IN INDIA

With an impending Avian influenza or bird flu pandemic, the issue of patents and public health has once again taken centre stage. Oseltamivir (known by its brand name ‘Tamiflu’), a patented antiviral pill, has emerged as the world’s first line of defence against bird flu. A key priority for most nations is to create sufficient stockpiles of this pill that can then be easily distributed and administered during a pandemic. Keeping this end in mind, this paper explores the patent position in India and looks at ways to work around a patent, should one issue in future. The paper recommends various strategies for creating an optimal and affordable stockpile and calls on the government to take a more definite stand in the matter.CONCLUSION

As of the date of writing this article and from the information obtained thus far, CIPLA and other generics are free to manufacture Oseltamivir. However, should Gilead’s mailbox applications mature to patents and the claims amended to include the main Oseltamivir molecule, the Indian patent regime offers a comprehensive compulsory licensing/government use framework that would enable the continued production of Oseltamivir at affordable prices.

Unfortunately however, the government appears to be shying away from taking a stand in this matter, owing to perceived fears that this would send out the wrong signals to multinational pharmaceutical majors, from whom they expect significant investments in the post product patent era. In fact, it took a while for the government to even clarify the obvious point about Roche’s patent–i.e. that generics could manufacture at this stage, as there were no patents covering Tamiflu. A news item states:

The government, however, has no plans to intervene on the product’s patent-related issues. Although the government wants to be prepared for a crisis, it, apparently, does not want to signal to the world that it favours generic companies at a time when the scare does not pose an immediate threat.

This is ridiculous. No doubt, one cannot state with any certainty that the notorious avian flu would definitely mutate to a form easily transmissible among humans. However, the threat is a very real one and when it strikes, it will do so mercilessly without giving any advance warning. It is as ‘immediate’ as can possibly be and no government can afford to ‘fence sit’ in such a matter. Other governments appear to be more active in this regard. Illustratively, following a break down in talks with Roche and Gilead, the Taiwanese government granted a compulsory license to Taiwanese drug firms. This license, valid till 31 December 2007, enables them to manufacture Tamiflu for domestic use only, subject to the caveat that such manufacture can take place only when there is a shortage of supply from Roche.

As a first step, the government ought to fast track the examination of the Gilead’s mailbox applications. More importantly, the government ought to arrive at an optimal stockpile number and work towards ensuring that supplies matching such number are met. Amongst other things, it ought to evaluate whether the sub-licensing arrangement with Hetero is sufficient to ensure such supplies.

No doubt, patents incentivise innovation, particularly in the area of pharmaceuticals and some respect ought to be accorded to patent rights. However, given an impending public health disaster, the government can afford to accord a little less respect. After all, it must be borne in mind that even the worlds patent friendliest nation, the US had wilted on its pro patent stand in the face of the Anthrax crisis in 2003. As rightly stated by one commentator in the context of intellectual property rights and developing countries:

The Indian government should therefore take a clear stand and devise an appropriate strategy/policy. We hope that this paper succeeds in giving some pointers in this direction.

Anyone who wishes to a full copy of the article, please write to me at [email protected]. Meanwhile, as we continue debating the esoteric patent issues, more chickens are being culled in India.