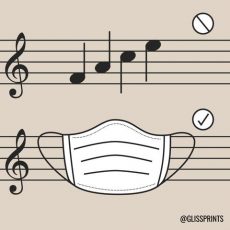 Image showing music sheet with musical notes in the first line and a mask in the second line. Image from here

A recent article by Paul Sullivan in the New York Times reported on an interesting change occurring in the music industry due to the pandemic. With live performances practically being shut down due to the pandemic, musicians across the world lost a significant portion of their income stream. While online streaming was expected to be a substitute, it turned out to be abysmally low [You can read about how much musicians make through streaming services here and here]. With this as the backdrop, the creation of a marketplace for royalties has come to the rescue of musicians. Investors have taken a renewed interest in looking at music royalties as an asset type.

In music creation, the artists who work towards the creation of the final product- songs, have a royalty interest in it and this interest is the compensation for their work. A royalty interest is the right of an artist/author to collect payments each time their work is used. Royalty payments are generated based on use and the rights owners collect payments for the same. As a practice, artists enter into contracts with publishers which grant them ownership of the work to commercially exploit it and collect the royalties it earns. Then these earnings are split between the publishers and artists based on the terms of the contract between them. An issue often highlighted in this space is the artists’ lack of bargaining and negotiating power while dealing with big publishing houses and the clout the latter have in the industry.

In this model documented by Sullivan, investors or exchange platforms offer to purchase the future stream of royalty earnings for limited periods or permanently from artists in exchange for advance payments [See examples of platforms operating in this space here, here, and here]. Per their websites, they offer advances to artists on the basis of their expected royalty earnings on customizable catalogs. In essence, after paying out an advance based on past performance of royalty earnings, these platforms redirect streams of the artist’s royalty income (based on the artist’s choice) to collect for their investments. The emphasis is on investing only in royalty revenue and not buying the artist’s rights or retaining control over their work. Further, the flexibility offered seems to allow artists to pick and choose how they want to interact with the investment space. They are allowed to negotiate the terms of the contract to decide the time period for sale – make a temporary or permanent sale and also decide the percentage of their royalty income they want to exchange.

Another interesting business model making its way into the music industry has pretty much been the talk of the town for a few months now – NFTs (Non-fungible tokens). An NFT acts as a certificate of ownership for whatever the creator puts up for sale. When dealing in NFTs, artists have the ability to set their preferred terms of contract while making sales. The sales are also embedded with ‘smart contracts’ that ensure that the artists get a share of the resale value when any resale takes place. NFTs have gained quite a bit of traction because they offer artists a lot of freedom as they no longer have to rely on record labels for distribution and publication. Thus, significantly bringing down the number of intermediaries involved. This ensures that downstream revenues are higher as artists can directly take control of the revenues earned through publishing.

Can these Models Make their Way to India?

There are significant differences in the music industries in the West and in India. For starters, the Indian music industry is heavily tied with the movie industry, with the amount of music being created outside of movies being small. Given that music is largely created for movies, artists do not necessarily have the avenues to consider alternative models of distribution.

As a practice, composers, lyricists, and singers are hired by film producers to work on songs for movies. Section 17(c) of the Copyright Act says that for works created in the course of employment through a contract of service, the first owner would be the employer, unless there is a contract to the contrary. The proviso added to the Section through the 2012 amendment to the Copyright Act says that for commissioned musical works, the composers would be the first owners of the copyright. As it has been argued here, despite this proviso producers can still be the first owner if a composer and producer enter into a contract to that effect. The proviso to Section 18 of the Copyright Act as added through the 2012 amendment prohibits the assignment of royalty rights except in favor of legal heirs and copyright societies. Both these amendments were brought in to protect the rights of musicians, composers, and lyricists. However, the provisions have not had the desired impact when it comes to fostering artists’ rights as exhibited by the pandemic. In that, despite the legislative and policy intent, the amendments have done little to take on big music labels when it comes to the redistribution of power within the music industry.

Right to Royalty vs. Royalty Income

The amended proviso to Section 18 says that the author of a literary or musical work shall not assign or waive the right to receive royalties to be shared on an equal basis. As has been argued here, if Section 18 is viewed as a provision that regulates the contractual terms of assignment, it is clear that a contract contrary to the provision, one that assigns or waives the right to receive royalties would be void. However, if only royalty incomes are leveraged for advance payments, then it can be argued that the artist still retains their right to receive royalties. This would involve the artist redirecting the royalty income they are entitled to receive to investors who have contributed to their advance payments. This redirection can take place only once the artist has received their royalty income as opposed to the existing model where the platforms automatically redirect the income as determined by a contract with the artist.

As it stands now, any leeway for such models (which may actually empower artists) would face a legislative block due to these provisions. Further, the nature of the industry has embedded record labels as an essential intermediary in its working scheme. Considering the inadequacies in the current legal framework, these models provide a radical opportunity to reframe how the music industry works by allowing artists to take more control over their work. This reframing would require a comprehensive reevaluation of artists’ rights in light of changing technologies and business models that significantly impact music consumption. While the 2012 Amendment sought to ensure economic redistribution amongst other things, future amendments that focus on shifting the balance of power in favor of artists, especially with respect to assignment of rights, would accord the flexibility required for them to thrive.

What Possible Impact could Creating an Open Marketplace for Royalties/Music Distribution have?

From the artists’ perspective, an open marketplace can promote their ability to have more control over their creations. A primary advantage, as noted in the Sullivan article, is that by leveraging royalty earnings with investors, musicians are able to get paid an assured income when they need it rather than relying on uncertain and intermittent royalty payments. Further, these funds compensate for the lack of income from streaming services, which has become the predominant mode of music consumption. Allowing artists to retain their rights over their music does fit into the larger narrative of IP incentivizing creators. In that, when artists know that they own the rights over their music but are only signing away a limited future expectation of royalties for a secure income, they have both protection over their work and economic security, which has traditionally not been the case in the music industry.

On the flip side, there are two very pertinent concerns about how these models influence the way the industry works. The first is best described by the term assetization (pg.1-41). This refers to an increasing tendency of turning literally anything into a revenue stream that can be traded and capitalized. This essentially aims to tap into the financial prowess of any art rather than protecting its inherent value. The second concern is with respect to the barriers these models would create with respect to who is able to invest in royalties or who is able to purchase music NFTs. The costs associated with these models are often prohibitively high for average fans to be interested in the same. There is also nothing apart from the perk of claiming ownership that would draw fans to this. Further, given the current esoteric nature of these models, average consumers tend to stay away from it. Moreover, there does exist the possibility of only big artists in the industry being able to cash in on this, as it generally tends to happen with any such new technology or business model.

While the workability and effectiveness of these new models can only be tested with time, it is interesting to note that they are being viewed as viable alternatives in an industry that has traditionally been skewed to favor big record labels and corporations more than artists. Retaining ownership over their music while also being able to access better downstream revenue certainly shifts the power dynamic in favor of artists.