We’re pleased to bring to you a post by our Fellowship applicant Nishtha Gupta, analysing the Delhi High Court’s recent decision refusing to stay the release film ‘Nyay: The Justice’ which is allegedly based on the life of late Bollywood actor Sushant Singh Rajput. Nishtha is a 4th year B.A. LL.B. student at the NALSAR University of Law, Hyderabad.

No Injunction on the Film ‘Nyay: The Justice’: Is It Really Just? 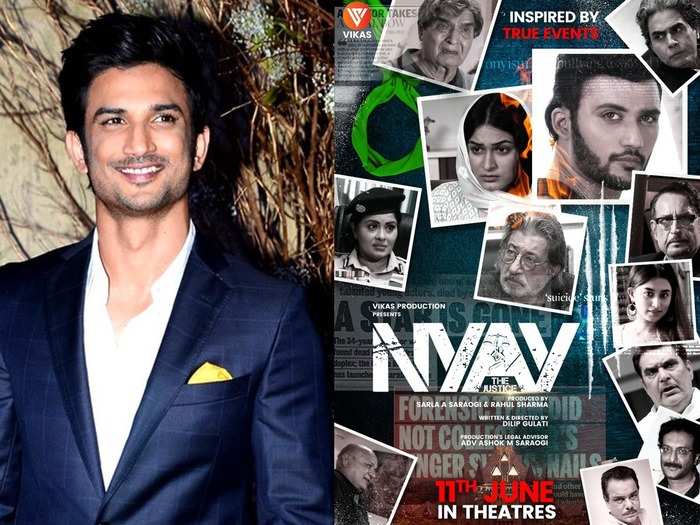 A photograph of Sushant Singh Rajput alongside a poster of the film ‘Nyay: The Justice’ (image from here)

When the right to publicity was first articulated by the Indian courts, little did they know of the complexity such matters would lead to. Plaintiffs have been headlong in filing claims to protect the publicity rights of their deceased progenitors. However, the absence of a formal codification or determinative theory of post mortem publicity rights in India, depicts that they have not gained the necessary traction and a firm legal foothold as demanded.

A recent order by a single judge of the Delhi High Court in a litigation demanding an injunction on the release of the film allegedly based around the life of Sushant Singh Rajput (‘SSR’) is another instance of the controversy surrounding the matter. Among the many grounds was the court’s refusal to afford post mortem protection to personality rights of the actor.

The absolute legal heir of SSR filed a petition before the Delhi High Court requesting it to grant an interim stay on the film proposed to be released on the life of the deceased actor. It was alleged that since the actor commanded mass following in the entertainment industry, the defendants were capitalising on his publicity for their commercial gain. It was contended that the defendants were planning to release the film titled ‘Nyay: The Justice’ without permission from the heirs of the deceased. The plaintiff censured the defendants for violating privacy, right to publicity, free and fair trial, also invoking the Ashok Kumar jurisdiction of the court. A single judge of the High Court on June 10 decided against the plaintiff and refused to grant ad-interim injunction on the release of the biopic. The single judge’s order has been challenged in an appeal filed a by SSR’s father. The vacation bench of the Delhi High Court on June 25 issued notice on the appeal but did not stay the release of the film. The matter is now scheduled for hearing for tomorrow.

I shall specifically be dealing with the contention around publicity rights.

In determining whether the deceased possessed personality rights enforceable by his heirs, the court based its reasoning on the intertwining between privacy and publicity rights.

It is essential to point out that the order has used publicity, personality, celebrity rights interchangeably given the application’s indifference towards these differences.

Firstly, the court, while explaining the theory of celebrity rights, established that the right to privacy was the fountainhead of publicity rights. Citing the Puttaswamy case and building on earlier decisions of ICC Development and DM Entertainment, the court ruled that right to publicity ensues from privacy and the two cannot be divorced.

Next, it delved into the question of the perpetuity or descendibility of these rights. Hinging on the Puttaswamy case which opined that the right to privacy is born with the individual and extinguishes on his death, the court extended the logic to publicity rights to hold that celebrity rights extinguish on the death of the celebrity. The plaintiffs’ claim which demanded recognition of post mortem rights thereby did not find favour with the court..

Another point of engagement was the copyrightability of a celebrity’s life. The court held that facts which are historical, and in the public domain are not copyrightable, given the lack of “creation”, which is an essential element of copyright. The court further acceded to the defendants claim that “the film was not a biopic, rather revolved around struggles of actors generally based on real events.” This took it out of the domain of a biopic, rendering it a work of fiction.

Firstly, the court deferred to the opinion that the film and its associated works were leaning towards works of fiction merely because they were not manifestly using references to the actor or his family. However, in the case of Shivaji Rao Gaikwad, the court held that a celebrity should be “identifiable” from the defendant’s work, in order to prevent others from using aspects of his personal life for commercial purposes. The court had laid down the test of “public perspective” which would lead to “identification” with the celebrity. It is not in dispute here that SSR was a celebrity. Echoing a similar sentiment, the title and poster of the movie in this case interpreted in conjunction with media reports and public perception might lead to identification with the deceased actor, despite attempts to invalidate this claim through disclaimers and distorting the references. While not empirically provable, on a quick google search, it would naturally appear to any person as if the film is based on SSR.

Secondly, the argument on post mortem publicity was largely based around privacy. However, it needs to be pointed out that the court has explicitly mentioned in the order that “celebrity rights is a bundle of rights comprising of Intellectual Property rights and privacy rights.” Thereby the court is acknowledging the enigmatic nature of this right- as both property and moral right. Moreover, the court missed the forest for the trees when it ignored the crucial distinction between publicity rights and privacy rights. Publicity is the result of effort and creation by the individual unlike privacy which accrues at birth. While they speak to each other or as the court says “cannot be divorced”, this does not mean they are a single soul either. At best they are conjugal with distinct and individual identities. It behooves the courts to adopt a balanced line of reasoning especially when they themselves attribute two sources to celebrity rights. To elucidate my point, celebrity rights (as also according to the court) can be sourced from both property rights and privacy rights. While the arguments around privacy are sufficiently considered by the courts, property rights need elaboration. Property rights demand that celebrities are protected against unfair and impermissible use of their names or likeness, indicating an opposite theory on post mortem publicity, since property rights such as copyrights are descendible. This would imply a similar descendibility of celebrity rights. This is not to say that all cases of post mortem celebrity rights should be protected. Certain safeguards such as the effort put in the celebrity to develop his status, efforts to protect his publicity rights should be perused. It is suggested that courts should delve into whether the celebrity had made conscious efforts during his lifetime to protect his commercial persona, preventing others from capitalising on his status. The nature of his previous contracts and intent to protect personality should be considered. However, without any such justifications, or attempts to interpret property rights, the court based its reasoning solely on privacy.

On the point of court’s reasoning that biographical facts and a life are not copyrightable, I argue that once celebrity rights are established, it is not biographical facts which are being granted protection, rather his persona and efforts he put into creating that personality. This effort and element of creativity thus renders the argument of non-originality moot.

A general trend unraveling is that the Indian courts are hesitant to comment on the status of post mortem publicity rights. The object of IP is to incentivise creative efforts and grant protection to the creators, allowing them to recover investments and reap its benefits for a limited period. Similarly, publicity rights encourage individual creativity by allowing celebrities to profit from their efforts. Courts need to justify why efforts to create a celebrity status should not be treated at par with copyrights or trademarks, despite them involving the fundamental prerequisite of “creation” while deciding on its descendability. Preference to a theory is an inevitable choice, however, what responsible reasoning demands is providing justifications for choosing one over the other.