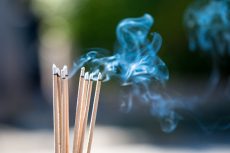 Image of lit agarbattis, from here.

We are pleased to bring you a guest post by Tahhira Somal, exploring existing frameworks of non-conventional trademarks, particularly those of smell marks, and assessing their role in the protection of certain traditional cultural expressions. Tahhira has a degree in Global Affairs, and is a final year LLB student at the Jindal Global Law School, Sonipat.

Nestled in Halsted, Chicago is a Michelin star restaurant that ubiquitously utilizes ‘aroma’ as its top ingredient. Olfactory marketing is not only employed by restaurants for their food, but is also often utilized in supplementing branding because just like a logo, it helps the consumer identify the experience associated with a service or product.

In this context, extending protection to non-conventional trademarks is compelling from the perspective of such marks being seen as source identifiers and marketing devices. By taking the specific case of ‘Attars’ (traditional perfume) and ‘Agarbattis’ (traditional incense sticks), which are also traditional cultural expressions, I examine the possibility of protecting such Traditional Cultural Expression (‘TCE’) as unconventional trademarks – from the perspective of such TCE oriented products and entities being part of whole businesses themselves. These businesses are seen in requirement of protection, not only from cultural appropriation perspective but also from commercial excesses common to other businesses.

Before delving into the protectability of Attars and Agarbattis, I take a quick look at smell marks as non-conventional trademarks. Non-conventional trademarks are different from traditional marks, in that they are not words and/or graphical logos as they cater to senses other than merely sight. One type of such non-traditional trademarks is a smell or scent mark. Smell marks are or have been heavily debated around the world and are privy to their own set of issues in terms of registration. In India, the debate still continues as you may find in the posts here, here and here.

Internationally, the statutory requirements for the registration of non-conventional trademarks varies across jurisdictions. Some countries such as the US and the EU have made possible the registration of smell marks through statutes or the judicial route. Notably, there is no protection of non-conventional trademarks granted under the TRIPS Agreement. That being said, the protectability of such marks is not barred. Article 15(1) of the Agreement states that the members ‘may’ impose the requirement of marks being ‘visually perceptible’ to be registrable.

In India, to the extent of registrability requirements, Section 2(1)(zb) of the Trademarks Act, 1999 (‘Act’) appears to be in compliance with the TRIPS agreement in defining a trademark as something being ‘represented graphically’. This results in the foremost hurdle in registering unconventional trademarks like smell marks in India because smell may not be capable of being graphically represented. Despite this, the Indian Draft Manual of Trade Marks 2015 (‘Draft Manual’) recognizes non-traditional trademarks, including scent marks. The Manual, is the reflection of policies formulated by the Ministry of Commerce Department of Industrial Policy compiled for regulated procedures and requirements for registration of trademarks. That said, not only does- the Draft Manual seem to be in conflict with the Act in this regard, but it has also adopted a problematic standard for the registration of smell marks, as discussed below.

II. Issues and Barriers to the Registrability of Smell-marks

Section 2(1)(zb) imagines trademarks as being graphically represented, barring the inclusion of most unconventional marks. (On a notable aside, some non-conventional trademarks may still pass the graphical representation requirement, such as the sound mark registered by Allianz Aktiengesellchaft.)

Aligning with the international trend of recognizing unconventional trademarks, the Draft Manual adopted the Sieckmann criteria following the test laid out in the European Court of Justice’s (ECJ) 2002 landmark decision of Ralf Sieckmann v. Deutsches Patent und Markenant. Under this test, the criteria required for a scent mark to be registered is that it should be clear, precise, self-contained, easily accessible, intelligible, durable and objective.  By introducing such a test even though the ECJ made clear that smell marks (which meet the criteria) may be protected, the decision itself doesn’t mention the mechanism by which these marks may satisfy the burdensome criterion. In fact, it disallowed three mechanisms of recording scent marks, including submission of a chemical formula and description. For a detailed exposition of the ECJ judgement one may refer to this previous post.

The next barrier to registration is found in the functionality doctrine of trademarks which is founded on anti-competitive concerns as explained in this post. It simply means that any product feature which is also functional cannot be trademarked. So, among scent marks, say if the product is a perfume, it cannot be trademarked because the smell is a functional feature. Notably, there is no clear consensus on the scope of this doctrine. Halsbury’s Laws of India on Intellectual Property makes two broad classifications: de jure, and de facto functionality. De jure functionality is defined as something functional in law if the degree of utility is so great that the configuration makes a superior design which others need to copy to be able to compete effectively. To shed some light on this, one can refer to the 2001 judgement of Surya Roshni Ltd. v. Metalman Industries where the Delhi High Court considered that since the use of certain colours was specified by the ISI to be used on steel pipes, this makes the colours functional by law. In consequence, the Court rejected the claim of Surya Roshni Ltd. that the double band of colours was trademarked. On the other hand, de facto functionality is explained as functionality in the lay sense where even if a feature is useful to the performance of a function, it still may be trademarked by the unique proprietor. To illustrate this, the US Court of Customs and Patent Appeals judgement of In Re Morton-Norwich Products, Inc can be referenced. In this 1982 case, the Court considered that since there was no necessity for other traders to copy the plastic spray bottle in question to enjoy any of the functions of a spray-top container it was de facto functional, hence it could be protected as a trademark.

‘Attar’ (traditional perfume) and ‘Agarbattis’ (incense sticks) fall within the Traditional Cultural Expressions category as defined by WIPO. (see more on TCEs here) For instance, one can see the Attars of Kannauj which are now known as ‘Kannauj Perfume’. Due to the industry’s reputation and link to Kannauj, these Attars were registered as a Geographical Indication in 2009. But all small traditional businesses of Attars and Agarbattis may not enjoy such privilege. In this context, protection as smell marks may lend necessary protection to such TCE.

Trademark protection would shield small traditional businesses such as Attar and Agarbatti manufacturing in villages from being appropriated by say a company’s fancier ‘incense sticks’ in the case they don’t have additional safeguards like that of Geographical Indications. The intended protection against cultural appropriation then becomes the basis to revisit the role of trademarks. In doing so, I only partially agree with the school of thought that views a trademark’s role as only a way to enhance market efficiency. Instead, I retain the view that sees the original role of trademark as preventive of taking undue advantage of someone else’s labour and goodwill which also benefits market efficiency by implication. This, then becomes the basis of claiming relaxations from the two primary barriers to registrability of such marks.

When intellectual labour produces a specific and unique scent which has come about based on combinations of ingredients in careful quantities, hen it must be liable to be trademark protected claiming relaxations from the functionality doctrine. While the scent itself is functional, it is not necessary for competitors to mimic the exact combinations. This is because, as explained earlier, the idea behind barring functional features is the element of necessity. The question that must be asked is if other fragrances or incenses will be disadvantaged if a particular scent is protected or is it necessary for them to use those fragrances to effectively compete. Here, the answer is no because there is no necessity in copying the exact combinations, thus putting up a strong argument to be de facto functional and hence registrable. A relevant example is found in a village historically linked to the tradition of Attar making in Kannauj where specifically the ‘miti attar’ (loosely translated as traditional soil perfume), a perfume made from the rain can be seen as deserving of a trademark.

Similarly, the Draft Manual seems to have internalized the Sieckmann Criteria, which can be seen as a common threat to all smell marks. Lifting the smokescreen, there is no point of de jure acceptance of smell marks if they de facto fail registration. This is especially so in the face of no framework on how unconventional marks may meet the criteria. Here, invoking the TCE principle as the basis of rethinking trademarks as being producer-centric, thus endorsing the second school of thought (as explained above) that rejects the notion of taking advantage of someone else’s labour would mitigate a formalistic interpretation of the Sieckmann criteria. This would particularly help to avoid inheriting excesses of an in-equipped system where the interpretation of permitted methods of representation in reference to the test are still subject to discretion.

The idea of trademarks as property of communities can be an effective way to protect TCEs, without stepping on the toes of the school of the view that trademarks are only used to enhance market efficiency. Apart from this, in this specific example of Attars and Agarbattis, trademarks protecting the unconventional in form of scents also compels the law to recognize such TCEs.