We’re pleased to bring you an in-depth two-part guest post by Akshat Agrawal looking into the ‘incentive/compensation’ structure actually in place for artists in India, its consequences, and a suggested amendment in the copyright law to deal with these issues. Akshat Agrawal is a law graduate from Jindal Global Law School, Sonipat and is currently working as a law researcher cum judicial clerk at the Delhi High Court. He has previously also written two guest posts for us, ‘Masakali 2.0: Unconsented Song Remakes and Ownership of Copyright‘ and ‘The Sensory Copyright Conundrum: An Analysis of the CJEU’s Decision With Respect to Copyright in the Taste of Cheese‘.

Who Gets Paid for the Music You Listen to?: Revamping Music and Copyright in India (Part I)

Many readers may have noticed the plethora of ‘2020 Wrapped’ social media shares, wherein Spotify listeners are given details of their music listening habits over the year. The shares include their most streamed artists, and those streams, across genres and artists are pretty high in number. But what does this translate to for the artists? 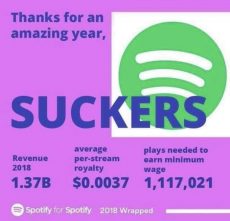 First off, Spotify does not pay per stream. Although, if calculated, the per-stream value on an average (assuming variances for freemium, premium, etc),is approximately Rs. 0.28-0.29, meaning 1000 streams result in Rs 280 (around 4 dollars?!). Spotify, however, pays on a ‘pro rata’ basis which basically depends on how much an artist’s music contributes to Spotify’s revenues. This further gets apportioned between sound recording ‘neighboring rights’ as well as authors rights.

This article on Soundcharts does a great job at breaking down these numbers. Riding off of their explanation – as a hypothetical, consider an artist ‘x’ whose music contributes Rs. 100 to Spotify’s overall revenue (depending on their number of streams – freemium and premium). Spotify keeps 30%, that is Rs. 30 (globally negotiated cut, see here and here) out of this. The pie leaves open Rs. 70. This amount DOES NOT go to the artist. A part of this amount goes in turn for sound recording royalties (to the owner of neighboring rights) and the remaining part in favor of the copyright owner. I am told that the industry practice is 70% of this amount towards the former and the remaining 30% in the hands of the copyright owners. Nonetheless, assuming more ‘fair’ negotiations and that the division is 50-50 for now, then of the Rs 70, Rs 35 goes to the music labels and Rs. 35 to the copyright society which holds the capacity to collect on behalf of the copyright owner. This second portion (Rs. 35), further gets divided amongst publishers and artists in an equal basis, rendering Rs. 17.5 in the hands of the publisher and Rs. 17.5 in the hand of the authors (in turn divided equally between the musician and the lyricist). Ideally, publishing royalties on the underlying works are supposed to go straight to the artist, however in India – publishing is taken up by labels themselves. In fact, even in IPRS, the publishers (who collect royalties on behalf of authors) are these labels themselves – leaving little scope to negotiate division of percentages, because well, one cannot negotiate with themselves (the board of directors of IPRS have representatives from Times Music, Saregama, Universal Music as well as Sony Music). Barely Rs. 17.5 out of this 100, goes back to the authors, and more specifically, merely Rs. 8.75 in the hands of the composer and the lyricist each. Another contentious question is with regard to the royalties to performers of these works (singers, musicians etc.), given the definition of ‘live’ performance has been interpreted to be expansive enough to include recorded performances. 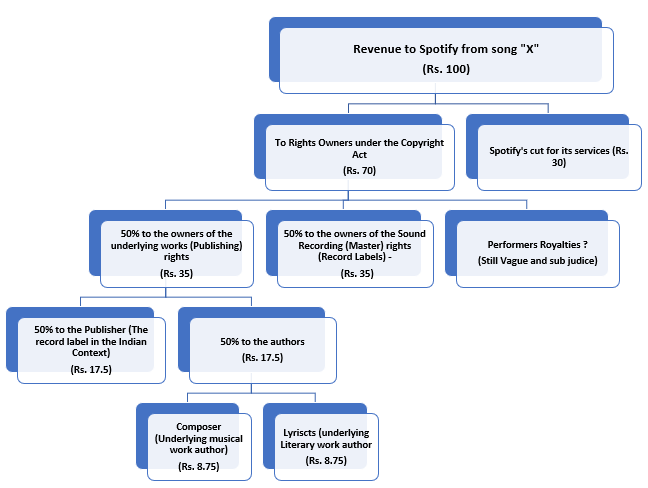 Is this the only way? No, though nearly 85% of the content on Spotify is via the Big 4 labels there are distributors like Distrokid and CD Baby, who instead charge a nominal flat fee of Rs 800-1000 annually, without transfer of ownership or stake. However, such distributors also tend to either not do much promotion, or not be very successful at it. Spotify’s new policy of paid promotion will not help matters either. The pro-rata model means that music with the highest visibility get the most amount of revenue. And the larger labels have a far greater economic capability to invest in promotion, as against individual non-label-based artists. This label-based promotion – effectively renders artists who aren’t backed by labels (aka those who defy sacrificing ownership of their rights) remaining obscure, and not getting any money anyway. On the other hand, those who do get this visibility make a compromise. They transfer their capability to earn through their streams, as all their exclusive rights in exchange for (non-guaranteed) visibility and popularity. No wonder the Big labels (and their various national affiliates) have been earning vaguely 19 million dollars per day, off Spotify revenues- with barely anything going back to the artists. This current modus not only erases the ability of independent/ non- mainstream artists to generate streaming revenue, but in fact enables a “payola” kind of a system where even platforms favor major label backed artists in its editorial as well as algorithmic playlists – as they earn them more revenue. Spotify even has a history of ousting non-label backed artists from its platform, due to lack of flow of revenue of them (see more here).

As far as claims against Spotify are concerned, there are various nuances and counter-arguments, focusing on a larger payout share, along Bandcamp’s model, given Spotify’s annual profit share currently at vaguely $ 2 million. There have been claims as to lack of transparency with respect to Spotify’s streaming data and payments mechanics as well, however, the problem is not (just) a Spotify one. 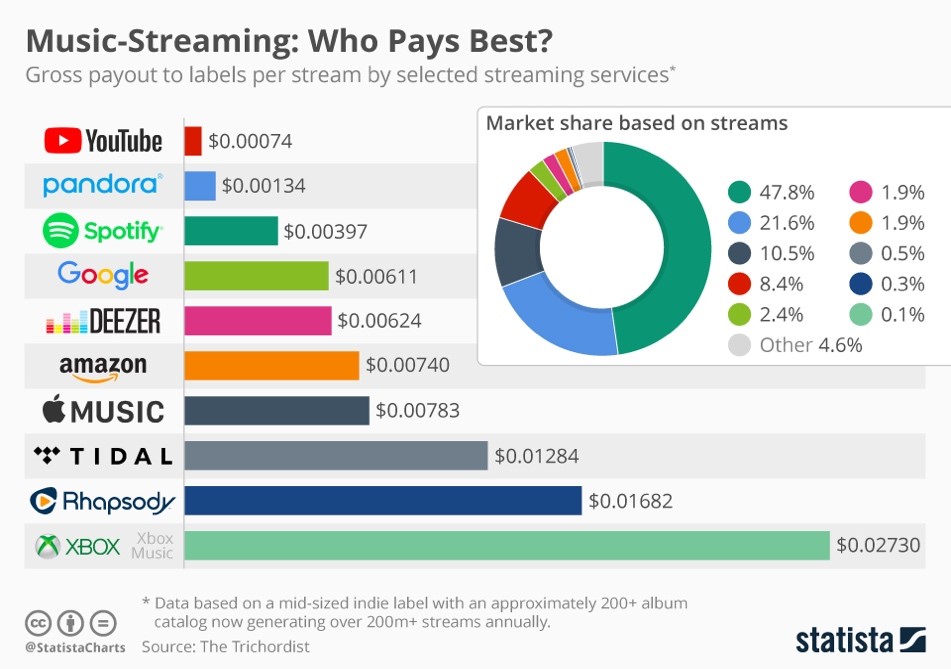 There is a deeper problem. The problem lies with the structure and the control on visibility, dominated by the few, which shall, in spite of these changes- never let artists get a fair share of sustainable income over their works. Even if payouts are increased, mind you, ‘artists’ are not going to make more. Further, in the current state, it does not make sense for artists to not give away their ownership rights on their works (often in positions of unfair bargaining power), in return of an effective access to an audience – given that if they don’t, they shall stay obscure, as someone else will. This choice is illusory. The problem is not with artists assigning away their copyright – thus empowering labels and industries to drive narratives – but rather, with the power dynamics involved, as well as the monologic discourse around commodification- which enables these industries to capitalize on their monetary privilege and not only deprive authors of survival-based remuneration, but also drive a mainstream and dominant narrative around culture, and its commodification.

The narrative of copyright as “authors’ rights” is a cloak and a cooked-up story, as copyright barely recoups anything for authors and artists struggling for survival, due to the lack of live shows during the pandemic is just the latest version of the problem.

As Prof. William Patry recognizes (at page 107), media/publishing industries have created a fascinating story – which puts authors in the forefront, hence bulging policy makers in support. These rights, to the contrary, realistically work towards corporate profit-making interests, among others, due to the tool of ‘assignability’ at their disposal.

Realistically, few authors have made money through copyright. Various studies and anecdotes have helped substantiate this over time (see here, here – page 16, here, here, here). In fact, vaguely 10% of the revenue through copyright, has been argued to be disseminated amongst 90% of the creators, with the rest in the hands of certain ‘superstars’

(who make mainstream content) as well as these industries themselves, which are  gold mines. Prof. Shamnad in a hard-hitting piece, which dates back to 2010, had emphasized upon this rhetoric, highlighting the plight of creators.

In India, a majority of music, in effective circulation, is still produced within the Film Industry (Bollywood) and its conglomerate structure, which although does foster a collaborative dialogue around creation, yet revolves around a mainstream narrative, merely including few artists who are signed to the labels – which are often employed by film producers for music in their films. The 2012 copyright amendments did substantially try to ensure equitable royalties to the creators of such works (under the proviso to section 18), however these have barely reduced the plight of creators, or the problem of diversity therein. Neither do these amendments resolve the issue of unfair bargaining power, with respect to these transfers, nor weaken the control of these labels – who keep a substantial share of the revenue inspite of merely being a disseminating intermediary. The amendments further do not address the impact of digitization and streaming culture on the continued economic rights for master producers, and whether their justifications still hold valid.

No wonder, various alternate remuneration models for artists and their sustenance are being proposed and even practiced in various jurisdictions including a cultural flat rate levy on stream access, cultural fee on internet subscription, tipping (voluntary payments model) and crowd funding-based models apart from the widely practiced merchandising and live-show oriented models, which have in fact proved to be quite effective, although currently being hit by the pandemic.

Copyright’s prime and perceived narrative (from the Act as well as the SC) revolves around authors, their efforts and their incentives/remuneration. However, as reflected above, copyright has not fulfilled this purpose.

The Control on Narratives

An argument is often made that copyright facilitates the entertainment business in India which produces the highest number of films in a year, thereby increasing the quantitative public store of creativity. However, when only the wealthy control dissemination, the content disseminated often has a tendency of reflecting the views and the interests of a concentrated group – to synergize on the wealth enhancing portfolio value (read Neil Netanels fascinating analysis on this here, especially at pages 1881-1882). The Indian Entertainment industry clearly reflects this in the thematic bend of the kind of content which is majorly disseminated, across regions and languages (see here, here, here, here , here, here, here,  here, here and here, for pieces and data questioning diversity in Indian entertainment, in the context of structural and economic representation).

Tools of financing cultural production have direct effects on the range of discourses in circulation. Even Chomsky has argued that the cultural mass media serves as a system of inculcating codes of behavior institutionally, which is often run by dominant large businesses who operate in profit enhancing bubbles. This further renders money and power as a tool to drive the narrative around what is desirable culture and what is not – as against actual democratic culture (watch here, if interested in this aspect of mass media propaganda).

Is copyright meant to facilitate more (homogeneous) works, or more and diverse/ representative expressions, in furtherance of a dialogic society? In Part II of this post, I shall be discussing the provisions of the Copyright Act, which facilitate this exploitative model of cultural regulation. Thereon, in light of the recent call for amendments, I shall go on to propose a few solutions, which could help remedy these existing flaws – to allow for a democratic dialogue around culture as well as fair remuneration to authors.

Part II of this two-part post can be viewed here.