We’re pleased to bring you Part II of a two-part guest post by Akshat Agrawal on the ‘incentive/compensation’ structure actually in place for artists in India, its consequences, and a suggested amendment in the law to deal with these issues. Part I of this post can be viewed here.

Who Gets Paid for the Music You Listen to? Revamping Music and Copyright in India (Part II)

Revamping Music and Copyright in India

In Part I of the post, I had discussed the revenue flow within the music industry, to expose as to how – the dialogue around copyright as ‘author’s rights’ is a cloak to cover up for concentrated industrial practices.

In this part, I shall be discussing the primary provisions within the Copyright Act which facilitate this and its implications. Further I attempt to propose a few imperative amendments to the law – to radically remedy existing flaws in the music and copyright system.

Copyright industries often rely on a few statutory tools, without which, their whole business would be rendered otiose. The primary tool which enables these industries to strip creators of their remuneration rights – using the bait of visibility and distribution, is in fact embedded within two sections of the Copyright Act. These sections, now more than ever (dare I say that), need to be re-visited, and if I radically may say so, abolished.

Firstly, section 17 of the Act, allows for corporate industries to be the first owners of copyrighted works created by their employees, and privilege them with an automatic transfer of all the rights which are ideally vested with the creator in the Act. Modeled after the ‘work-for-hire’ provision in US copyright law, this provision facilitates corporate ownership of copyright, as against ownership in the hands of the creator, as an individual. I have already discussed the pitfalls of such a provision in a previous piece for the blog and elsewhere, arguing for its application to be completely ignorant of the purpose and public perception, of the Copyright Act in the first place. Hence to avoid repetition, I shall be focusing upon, the second provision i.e., section 18, which allows for authors to transfer their copyright, entirely, in favor of corporates/ publishers.

Section 18, which allows for copyright to be transferred, is a godsend for media industries to capitalize and build vast content-based monopolies. Copyright intermediaries (media companies) have too many opportunities to exploit and take advantage of creators, especially those seeking to enter the realm of effective dissemination. They hold an unequal bargaining power (also documented and argued here, here, here in context of India and here, here, here and here in the context of other jurisdictions) due to their control over access and visibility. These contracts are often unconscionable, and unreasonably skewed as the weaker party is in a position where they can obtain goods, services or means of livelihood realistically, only upon agreeing to the terms imposed by the stronger party. An agreement between an entrant author and a giant economically capable publishing house often reeks of such contractual realities, exposing the author to various vulnerabilities in terms of giving away their ownership for an effective access to an audience. Authors, may have a moral claim to the fruits of their labour, but often have a hard time holding on to them, specifically when visibility is dominated by the monetary ability of these industries. Here, it is essential to note that the right or freedom to contract cannot be looked at in a vacuum, completely in ignorance of the prevalent power dynamics in the relationships involved. An argument to uphold the sanctity of the freedom to contract, can never be oblivious to its potential illusoriness.

It is a lose-lose situation for artists, downstream creators as well as the public, as these intermediaries, who own the copyright by virtue of assignments, exploit these rights in a way that will maximize their revenues no whatever what – unreasonably hindering access as well as shrinking artist payouts.

So, what is the solution?

At least one option involves rethinking assignment of copyright. Treating something as (physical) property, makes it easier to sell, and in fact encourages transfer, irrespective of the contractual power dynamics involved while entering into such agreements.

An argument to forbid assignments of copyright in favor of media/ publishing companies, in effect limiting contractual freedom, is not a novel argument even in the Indian context. Prof. Shamnad had argued for it in the past and had even made an anecdotal case for it. Further, while making recommendations for the Copyright Amendment Bill, 2010, a case to forbid assignments of copyright (apart from in favor of legal heirs), along the lines of the approach followed by Germany (section 29(1)) and Austria (section 23 UrGH), was argued, however it seems to have been missed by policy makers, without expending any rationale or reason.

With recent calls for amendments, given the need to adapt the copyright statute with growing digitization and streaming culture, and the continued plight of authors and artists, there is an imperative need to discuss and question the “author-like” rights in the hands of corporate industries.

Digital technology and networks have dramatically reduced the costs of reach and wide dissemination, enabling authors to be independent and not rely on publishers. This in fact opens up possibilities to do much more with the works, (remakes, reuses etc.), if these authors are not constrained by the copyright that they’ve had to hand over. Further, even within the pie-sharing approach, a larger share of sound recording royalties needs to be rethought. The high rates of mechanical royalties (for producing sound recordings) were relevant in the pre-internet era when multiple copies of works were produced and sold, individually as independent goods. With the advent of internet streaming – charging the same fee for making each copy, regardless of how many copies are there, is unjustifiable – as it is effectively only one recording and one copy, which everyone accesses. The need for continued royalties/income (for recording companies) out of exploitation of “works” based on the premise of production of copies is otiose.

For distribution charges, there can still be a revenue sharing arrangement (fee-based model), where an author and a publisher (if chosen) could share revenues on broad dissemination and other services, however the transfer of ownership (and specially on such unfair terms) is not required, nor serving any practical purpose anymore. Rather, having it leads to additional societal losses such as creating a conglomerate-based dominant narrative around culture and information.

Artists have been grossly affected due to the current model. Even the deserving royalties are often not paid to musicians and lyricists (see here, here and here). Disintermediation merely changes the flow of revenue and the holder of control. This change, although, has a huge impact on how the industry works – and can help re-balance various power dynamics) for creators. In this change, the control over exploitation of the work shall rest with the author, with certain service-based permissions granted to the publisher. The revenue shall firstly flow to the author, through Collecting societies (author-based organizations), and thereafter, as a fee, to the publisher – as against the status quo – which is the other way around. Even a change in the “right to royalty” could be explored, wherein, a royalty percentage to the distributors could be allotted (out of the primary revenue “received by creators”) in lieu of their valuable services, rather than the current – opposite schema of distributors providing royalties to creators on their own creations, which they unfortunately don’t own anymore. Further, there is also a possibility of termination of such agreements, upon non-performance, as against assignment agreements, which cannot be terminated in India.

Disintermediation allows the eradication of this concept of ‘financiers copyright’ (page 176), disabling constrained creativity –– and allowing for diversity in the kind of expressions that exist in circulation. Concentration of culture and knowledge-based resources in corporate hands has been argued by many authors to have become a post-modern meta-colonial force, that influences individuals and the whole society. It restricts actual freedom and autonomy in expressions as well as expressive reach –thereby impeding democratic, deliberative and dialogic development. Monopolization of content in the hands of few conglomerate publishers has often played a huge role in limiting the diversity of perspectives that exist, solely focusing on creations that can render the largest number of profits (governed by structurally elite interests). Further, these industries have a huge role in defining narratives and public discourse, and frame social identities, to some extent. Disintermediation can largely, help remedy these flaws – by potentially democratizing content dissemination and equally involving authors with multiple diverse perspectives, bereft of corporate patronage. 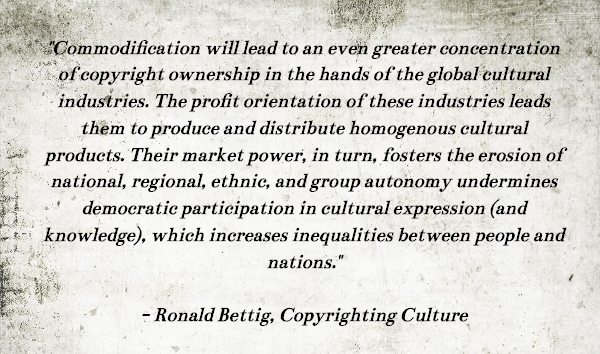 Essential to note: I do not seek to romanticize authors here, in fact I have argued elsewhere as to how, authorship in itself is a privileged accreditation. Further, this solution may not work in context of works which require high amount of investment for production, like cinematographic films, where such neighboring investment-based rights make sense. However, in the current state of the statute, dispersing incentives could be more beneficial that concentrating them, especially for diversity in deliberation and content- as well as for a more access-oriented narrative around culture to prosper.

Another reason to consider abolishing assignments of copyright, is for it to likely benefit downstream creators, to use and access existing works effectively. Artists/suthors are, more often than not, not as profit oriented as corporates, and are rarely as restraining when it comes to a downstream creator using existing works for dialogic indulgence – like sampling, remixing, quoting, and other similar derivative uses. There are many artists who in fact encourage cover versions and often share it on their social media, irrespective of it being commercial use or not.

Summarizing the benefits of disintermediation, and the need to revamp section 18 – to abolish assignments of copyright – the reasons are that it (potentially) allows for:

On a side note, another imperative change, for the Copyright Act, to actually align with the perception of copyright, is for an amendment in Section 13 and 14. This amendment shall specifically provide for a new head called: “Neighboring rights”, in lieu of the protection of sound recording and cinematographic works, as against “copyright” – as these works are accorded limited rights and are rights for investors – as against creators. These rights do not entail the requirement of originality and are specifically present to protect the interests of those who invest, financially, in providing for these works. Therefore, to avoid conflating these rights with the conception of copyright – as primarily being rights of authors- it is imperative to specify that these rights are not copyright, but rather “neighboring” sui generis rights, and these works are not copyrightable works – which require originality as a pre-requisite for protection.

By conflating authors interests with those of investors, we tend to overlook the most important difference between them – the relevance of the “created expression” in Copyright. These changes shall ensure that Copyright does not serve the purpose of being a “financiers right” and rather helps incentivize authors (in the sense remunerate authors, to the extent required to continue creative endeavors, rather than shifting to marginal sources of revenue) in order to serve the end i.e. the public-interest oriented goal of “more and diverse expressions”. This call for amendments provides us a chance to remedy these flaws – and make copyright enable, rather than restrict, a wide public store of diverse knowledge and culture, for a deliberative, perspective-based, participative and inclusive society.

Author’s note: I would like to thank Swaraj Barooah for the immeasurable amount of guidance received while curating these posts.