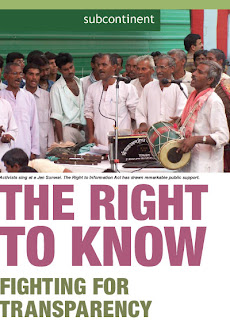 The Indian Patent Office website now has a separate section on what kind of information can be accessed under the “Right to Information Act”. I’m curious to know if any one has attempted to access information under this and what the results have been. I understand that the RTI was invoked in the context of the Tenofovir opposition. For those not familiar with this case, here is an extract from the South-North Development Monitor (SUNS) # 6027, 15 May 2006.

“On 9 May, an opposition to the patent application on the AIDS drug tenofovir disoproxil fumarate (TDF) was filed at the Delhi Patent Office by The Indian Network for People Living with HIV/AIDS (INP+) and the Delhi Network of Positive People.

They are challenging an application filed by the US-based company Gilead. It plans to file patents in 97 countries by the end of this year.

According to Medicins Sans Frontieres (MSF), Gilead’s price for the drug is $5,718 per patient per year and it has not made an offer to make it available at a more affordable rate to middle-income countries such as Brazil, India, Thailand and China.

The Indian generic drug company Cipla makes available a generic version of TDF at one-seventh the international price of the branded product. The company has also registered an opposition to Gilead’s patent application.

If, however, the patent is eventually granted, companies like Cipla would not be able to continue generic production, unless it then applies for and is granted a voluntary license by the patent holder or a compulsory license by the government, and royalty is paid.

This is the second patent application on an AIDS drug that is opposed by Indian NGOs. The first opposition was filed on 30 March 2006 by the INP, the Manipur Network of Positive People (MNP), and the Lawyers’ Collective HIV/AIDS Unit to a patent application filed in the Kolkata patent office by Glaxo Group Limited for Combivir, a fixed-dose combination of two AIDS drugs (zidovudine/lamivudine, or AZT/3TC).

These groups argued that Glaxo’s Combivir (AZT/3TC) is not a new invention but simply a combination of two existing drugs.

In both cases besides the claim that these products are not “novel” or “inventive”, crucial criteria that have to be fulfilled prior to enjoying the grant of patent monopoly, the opponents also are concerned that a patent will hamper access to life-saving medicines.

Tenovofir is an important option for patients starting AIDS treatment for the first time, and for those who have been on antiretroviral treatment therapy (ART) for some time and require access to newer drugs due to occurrence of toxic effects or as they develop resistance to first-line drug regimens.

It is argued on behalf of INP that forming a salt (fumaric acid) out of an existing compound (tenofovir disoproxil), is a common practice within the pharmaceutical industry, and thus should not be considered a new invention, and thus the patent application should be rejected.

….If the patent is granted, it will set a dangerous precedent for global access to newer essential drugs, said Anand Grover, Director of the Lawyers Collective HIV/AIDS Unit.”

As many of us following the Novartis dispute know, a decision from the court/IPAB regarding the scope of section 3(d) and whether the beta crystalline version of Imatinib Mesylate is patentable or not will have an impact on how the Tenofovir patent opposition is decided.

My understanding (subject to correction from those of you who know more about this case) is that the NGO’s opposing the Tenofovir application were denied access to some documents connection with the patent application filed by Gilead. They invoked the RTI but to no avail. They then approached the High Court and got an order in their favour. The patent office was then forced to release this information.

Interestingly, the patent office website states that the following information is “exempt” from the obligation to disclose under RTI:

1. The contents of a patent application upto 18 months till it is published unless and until the applicant makes a request for early publication and the application is published in the official journal of the Patent Office.
2. The content of an application (Patent or Designs ) relating to Defence of India and secrecy direction imposed by the competent authority of the Ministry of Defence till the secrecy direction is withdrawn.
3. The reports of examiners to the Controller under the patent law is not open to public inspection or be published and such reports shall not be liable to production and inspection in any legal proceeding unless the court certifies that the production or inspection is desirable in the interest of justice.
4. An information which is a part or full of the Annual Report of the Controller General under preparation and yet to be placed in the Parliament. The Report can only be available on the approval of the Publication by the Parliament on payment of prescribed price.
5. An information which is a kind of statistical information such as how many drug applications have been filed during a particular period or and the like. Such information however is also not to be called an “ information” under the definition of “information” under the “Right to Information Act,2005” .In this connection the related information can be procured or generated from the weekly published Official Journal of the Patent Office.
6. Other information, which is supposed to remain confidential viz, names of question paper setter or evaluators etc in the periodical Patent Agent Examination.

Amongst the above exceptions, what piqued my interest was exception number 5.: “An information which is a kind of statistical information such as how many drug applications have been filed during a particular period or and the like.Such information however is also not to be called an “ information” under the definition of “information” under the “Right to Information Act,2005” .In this connection the related information can be procured or generated from the weekly published Official Journal of the Patent Office.”

I’m not sure how helpful/convenient the weekly manuals are likely to be in helping someone access “drug patent” information. If applications are divided into separate categories and allotted to examiners as per their competence, it appears that it should not be too difficult for the patent office to put together this information. And if they’re not already doing so, it may be useful to now start classifying “pharmaceutical” applications under a separate category–as this is perhaps the one technology segment that is likely to come under intense public scrutiny– not just in India, but throughout the world.