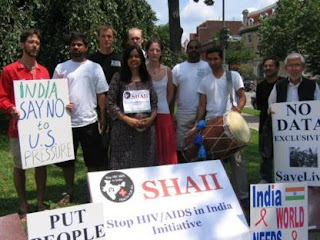 In a piece titled “Pharma firms will have to wait a while for data exclusivity norms”, the Economic Times states:

“Call it the Mashelkar effect! The Satwant Reddy committee, which is examining whether MNCs should be allowed to guard their costly clinical data from local rivals, is unlikely to take a call on the issue in the near future. The decision has been taken considering the sensitive nature of the issue and the strong opposition NGOs and a section of the pharmaceutical industry recently put up against R A Mashelkar’s report on patent laws, which apparently favoured MNCs. Mr Mashelkar, who resigned from the technical expert group following charges of plagiarism, had said that not allowing patents on incremental innovation would violate WTO agreements.

While the Left parties want further tightening of the law, MNC pharma companies seek a more generous regime. The law was designed in 2005 as a compromise between the two, with a commitment from the government to get it reviewed by Dr Mashelkar. Sources said that the data exclusivity panel may not submit its report by May, when Mrs Reddy is slated to retire as the chemicals and fertilisers secretary. The government apparently does not want another controversy at this point of time by granting data exclusivity — a demand from big pharma companies — which would either delay the arrival of copycat versions of patented MNC drugs in the market or make them less price competitive. Besides, the panel is yet to arrive at a consensus with the health ministry, which approves new drugs, on the issue. It is understood that health minister A Ramadoss had opposed granting of data exclusivity at the April 10 group-of-ministers meeting on the new pharmaceutical policy. Mr Ramadoss pointed out that nothing beyond protection against leakage or theft of data submitted to the government can be granted, sources said. Moreover, it is in the government’s interest to reserve grant of data exclusivity as a possible bargaining chip in the WTO negotiations later on. It is interesting to note that the former chairman of the committee and Mrs Reddy’s predecessor in the ministry, Pratyush Sinha, too, had felt at the end of his tenure that time was not ripe to take a view on the issue.”

As I’d noted in an earlier post, I made a submission to this Committee, arguing that Article 39.3 did not mandate “data exclusivity. The abstract is below:

“The appropriate standard of protection for regulatory data (pharmaceutical and agro-chemical) under Article 39.3 of TRIPS is the subject of considerable controversy. This paper finds that the minimum standard mandated by Article 39.3 is neither one of data exclusivity (as argued by the US and EU) nor one of ‘permissive reliance’ (as argued by Professor Carlos Correa and others). Rather the term ‘unfair commercial use’ in Article 39.3 in effect envisages a ‘compensatory liability’ model, whereby regulatory data that complies with the pre-requisites of Article 39.3 (i.e. it relates to pharmaceutical or agricultural new chemical entities, is undisclosed and its origination involves considerable effort) cannot be used by any person, including a regulatory authority that uses such information to approve another product, without some compensation being paid to the originator of such data. The paper discusses some examples of such compensatory liability models. The paper also finds that current Indian law does not comply with Article 39.3.”

Here again, one has to bear in mind that there is a difference between a provision that is TRIPS compliant and a provision that furthers “national” interest. In other words, something that is TRIPS compliant need not always be in national interest and vice versa. The US failure to change its copyright law to comply with the WTO panel decision in the copyright “homestyle exception” case is a clear example—where domestic pressures have constrained the US government and prevented it from giving effect to this WTO ruling. India could therefore opt to do the same—i.e. to ignore any prospective WTO ruling in this regard that holds that Indian law does not comply with Article 39.3.

In any case, if the standard under Article 39.3 is clearly not one of data exclusivity, I’m not sure that the US or EU would risk bringing an action in this regard. This would compromise efforts of the US government in claiming that Article 39.3 demands “data exclusivity” and ratcheting up data protection standards through the clever use of FTA’s.

Secondly, if a panel ultimately finds that it entails compensatory liability, this is a worse blow for the pharmaceutical industry than having a law (such as the current one in India) that merely prevents disclosure of data. Compulsory licensing is a term makes multinational pharma companies squirm. Not least because a compensatory liability model or a compulsory licensing model would force them to disclose “costs”. And given the oft repeated 800 million dollar pill cost (around which a number of the pro protectionist arguments are based), I’m not sure that they would want to divulge any data that could be subject to public scrutiny—as many think that this figure is not an accurate one.

Therefore, the smart thing for India to do would be to assess as to what is in “national interest” here and not worry about the TRIPS implications at this stage. Of course, India is also free to bargain away this TRIPS flexibility in Article 393. away for concessions in other fields (such as more access to Western markets for Indian goods/services and more international norms for biodiversity/traditional knowldege, an area which is of keen interest to India). Perhaps this is what the Economic Times article hints at when it states:

“Moreover, it is in the government’s interest to reserve grant of data exclusivity as a possible bargaining chip in the WTO negotiations later on.”