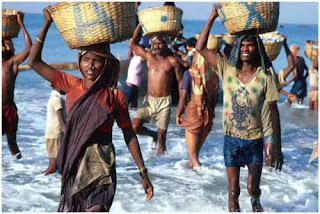 The Economist carries an interesting piece on how mobile phones have contributed to increased efficiency(and economic returns) to Kerala fishermen. Somewhat off topic, but an interesting read nonetheless.

“YOU are a fisherman off the coast of northern Kerala, a region in the south of India. Visiting your usual fishing ground, you bring in an unusually good catch of sardines. That means other fishermen in the area will probably have done well too, so there will be plenty of supply at the local beach market: prices will be low, and you may not even be able to sell your catch. Should you head for the usual market anyway, or should you go down the coast in the hope that fishermen in that area will not have done so well and your fish will fetch a better price? If you make the wrong choice you cannot visit another market because fuel is costly and each market is open for only a couple of hours before dawn—and it takes that long for your boat to putter from one to the next. Since fish are perishable, any that cannot be sold will have to be dumped into the sea.

This, in a nutshell, was the situation facing Kerala’s fishermen until 1997….

But starting in 1997 mobile phones were introduced in Kerala. Since coverage spread gradually, this provided an ideal way to gauge the effect of mobile phones on the fishermen’s behaviour, the price of fish, and the amount of waste. For many years, anecdotes have abounded about the ways in which mobile phones promote more efficient markets and encourage economic activity. One particularly popular tale is that of the fisherman who is able to call several nearby markets from his boat to establish where his catch will fetch the highest price. Mr Jensen’s paper* adds some numbers to the familiar stories and shows precisely how mobile phones support economic growth.

As phone coverage spread between 1997 and 2000, fishermen started to buy phones and use them to call coastal markets while still at sea. (The area of coverage reaches 20-25km off the coast.) Instead of selling their fish at beach auctions, the fishermen would call around to find the best price. Dividing the coast into three regions, Mr Jensen found that the proportion of fishermen who ventured beyond their home markets to sell their catches jumped from zero to around 35% as soon as coverage became available in each region. At that point, no fish were wasted and the variation in prices fell dramatically. By the end of the study coverage was available in all three regions. Waste had been eliminated and the “law of one price”—the idea that in an efficient market identical goods should cost the same—had come into effect, in the form of a single rate for sardines along the coast.

One criticism levelled at such studies, says Mr Waverman, is that it is difficult to tell if mobile phones are promoting growth, or growth is promoting the adoption of mobile phones, as people become able to afford them. It is easy to imagine ways in which mobile phones could stimulate economic activity—they make up for poor infrastructure by substituting for travel, allow price data to be distributed and enable traders to engage with wider markets, and so on. Mr Waverman uses a variety of statistical tests to try to tease apart cause and effect. But detailed analyses of micro-market data like Mr Jensen’s, he says, show how phones really do make people better off.”