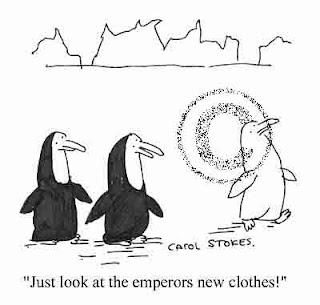 The latest move by the government of India “to lodge its protest against yoga-related patents issued by the US Patents & Trademarks Office” prompted a number of emails to me this morning. Some even went to extent of suggesting: “Surely, if the government is taking this up, there must be some merit in this case”.

If you really want to believe that a naked emperor is adorned with the finest clothes, be my guest!! It’s all a matter of perception anyway, and as our good old sages rightly intuited: the world is nothing but “Maya”– an illusion!!

Metaphysical musings aside, given the fact that governmental interventions in matters of this sort cost time and money (tax payers, of course), I think it’s important to think through these issues carefully and not fall prey to a trigger happy attitude. Shwetasree did an excellent post reflecting on this constant confusion between “patents” and “copyrights” and this tendency to force emotional rhetoric down the throats of unsuspecting members of the public.

In the wake of complaints that SpicyIP only caters to IP aficionados, I’ve tried to present the issues in a simple Q/A format below. A special thanks to my friend, Rohan George, an excellent journalist with “Down to Earth” for highlighting the utility of such a format to me.

1. Has the USPTO granted any patents on yoga asanas?

No. I searched the USPTO database and couldn’t find a single patent that claims any of the yoga asanas. It’s highly amusing therefore to hear a government official state lament:

“It’s ridiculous to even think that an asana which has been practised for several years can be patented just because they think it is different. They have not been looking at the digital library,”

Well, good sir, they’re going to ask you to take a look at the USPTO database before venturing into your digital library!

2. Are there any patents related to yoga at all?

Yes, a search of the USPTO database reveals 166 Yoga related patents. However, most of them relate to yoga related props and accessories (and some of them only mention the term “yoga” in passing). Examples include:

3. Do these patents matter?

A patent is granted to any invention that is “new”, “inventive” and “useful”. Upon grant, a patent provides the exclusive right make, use and sell the invention in question. Given this fact, do we have objections to any “accessory” related patents that meet the patentability criteria spelt out above?

I guess not, since they don’t lay claims on our “timeless” asanas –rather, they cater to what Ayesha had earlier referred to as “karma capitalism”—a world where yoga has become more of a fashion statement and less of a spiritual endeavour. In other words, Suketu Mehta who was concerned about his father performing Sirsasana in the wake of these “accessory” monopolies need not worry, unless his father insists on standing on his heard whilst at the same time, wearing the Yoga Socks.

4. If there are no patents on yoga asanas but only on the props/accessories, why is there so much of a fuss?

I’m not entirely sure—it probably has to do with the fact that such emotional appeals are fashionable today. Those that have been following this thread will know that this controversy has its roots in our famed “hot” guru Bikram claiming copyrights over his 26 sequence “sauna” room Yoga. I’m also guessing that some part of all this fuss (or tamasha, to use an Indian term) sprang from Suketu Mehta’s famed editorial that made its rounds in almost all the IP related listservs that I know of. I advised Suketu to stick to fiction when I first reacted to his NY Times piece—and now the advise turns to a deep imploration—as he has in many ways caused a considerable waste of my valuable time (and I’m sure of many others who are tired of dealing with this constant play on emotional rhetoric).

5. Where does Bikram Choudhary and the copyrighting of “hot yoga” poses fit into all of this?

If at all Yoga fans and guardians of Indian heritage need to be concerned, it’s with the copyrighting of Yoga sequences by Bikram Choudhury. Of course, this copyright only covers the exact 26 sequence step allegedly distilled out of the ancient scriptures by Bikram, to be performed in a “hot” environment. It does not prevent you from doing the asanas in any other sequence in a not so hot environment. More importantly, such a copyright may be contestable: As I noted in an earlier posting:

“… even under the most liberal IP standards that the US has now come to represent, you could still run a claim that yoga sequences are not copyrightable, since they are predominantly “functional”. And if the US is serious about “precedents” and respecting the classic “idea expression” dichotomy laid down in Baker vs Selden, you’re likely to succeed. The Patry Copyright Blog, by William Patry, Senior Copyright Counsel, Google Inc, elucidates this point quite well and also cites to 2 law review articles on this theme.”

The copyright issue is a complex one and the “real” issue here— however, there are strategic ways of dealing with this, which the government or any interested party ought to explore. But unless we identify the correct issue, we may be barking up the wrong tree (or in the context of Yoga, breathing up the wrong nostril OR stretching the wrong way).

6. Any final pearls of wisdom?

Yoga in many ways is about “breath”—so lets take some deep breaths here, calm our minds and explore these issues in a sensible way.

As the noted Yoga maestro, BKS Iyengar, once remarked “Yoga teaches us to cure what need not be endured and endure what cannot be cured”.

I’m hoping that “ignorance” is something that can be cured. Else, we may have no choice but to endure it.