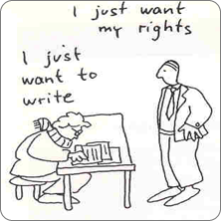 “In the material world, laws are geared to protect the right to equitable remuneration. But life is beyond the material. It is temporal as well. Many of us believe in the soul. Moral Rights of the author are the soul of his works. The author has a right to preserve, protect and nurture his creations through his moral rights” (Justice Pradeep Nandrajog Amar Nath Singh v. Union of India (2005))

Section 57 of the Copyright Act, 1957 provides for what are termed as “Author’s Special Rights,” better known as “Moral Rights.” Founded on Article 6bis of the Berne Convention, moral rights have two key prongs (1) Right to claim authorship of the work (sometimes referred to as Rights of Attribution/Paternity Rights) and (2) Right against distortion, modification or mutilation of one’s work if such distortion or mutilation would be prejudicial to the author’s honour or reputation (or “Integrity Rights”).

A number of statutes and case law (in India and abroad) deal with moral rights. In the coming few weeks, I plan to devote at least 2-3 posts to “Author’s special rights” to discuss a number of issues relating to moral rights in India and internationally. As always, I welcome reader participation to enrich the debate and to bring out all perspectives. Lets warm up with the issue of Waiver, which is one of the most hotly discussed issues in relation to moral rights.

57. Author’s special rights. (1) Independently of the author’s copyright and even after the assignment either wholly or partially of the said copyright, the author of a work shall have the right-

(a) to claim authorship of the work; and

Is Waiver Possible under India Law?

A case decided not too long ago by the Delhi High Court, Amar Nath Seghal v. Union of India (2002(2)ARBLR130(Delhi); 2005(30)PTC253(Del)) discusses the issue of moral rights in substantial detail. In this case, the plaintiff/author assigned his copyright in a bronze mural, to the Union of India. The mural was placed in Vigyan Bhavan, but was later pulled down and dumped. The author, Amar Nath Seghal, sued for violation of his moral rights.

The case was filed in the early 90’s and an interim injunction was passed in favour of the Plaintiff. In response, the defendants made an application under the Arbitration Act, 1940 seeking stay of proceedings in the suit claiming that the dispute ought to be referred to arbitration in the light of a term in the assignment requiring arbitration of all disputes.

The interim application was decided in 2002 and the case itself was finally decided in 2005. The court dismissed the claim under the Arbitration Act and further observed: “These [moral] rights are independent of the author’s copyright. They exist even after the assignment of the copyright, either wholly or partially.” The court quoted from Smt. Mannu Bhandari v. Kala Vikash Pictures Pvt. Ltd. and Anr. (1986)

“Section 57 confers additional rights on the author of a literary work as compared to the owner of a general copyright. The special protection of the intellectual property is emphasised by the fact that the remedies of a restraint order or damages can be claimed “even after the assignment either wholly or partially of the said copyright..” Section 57 thus clearly overrides the terms of the Contract of assignment of the copyright. To put it differently, the contract of assignment would be read subject to the provisions of Section 57 and the terms of contract cannot negate the special rights and remedies guaranteed by Section 57. The Contract of Assignment will have to be so construed as to be consistent with Section 57. The assignee of a copyright cannot claim any rights or immunities based on the contract which are inconsistent with the provisions of Section 57.”

From the above wording, it could be argued that “moral rights” are akin to the Fundamental Rights guaranteed under the Constitution, in that they cannot be waived. Interestingly, Article 27 (2) of the Universal Declaration of Human Rights provides:

(2) Everyone has the right to the protection of the moral and material interests resulting from any scientific, literary or artistic production of which he is the author.

Under the case Vishaka v. State of Rajasthan (1996), the Supreme Court held that provisions of international conventions can be read into the Constitution where there is no contrary domestic law in the field.(This case was also quoted by the Delhi High Court in Amar Nath – albeit in a different context – more on this soon to come!).

In the United States on the other hand, the Visual Artists Rights Act (VARA)of 1990, expressly provides for waiver of moral rights, but only by a signed, written agreement specifying the work and the precise uses to which a waiver applies. See here.

According to at least two authors, “Indian law would probably permit waiver of moral rights if it is in writing and meets the “reasonableness” standard. For example, a waiver is more likely to be upheld if it is revocable and applies to specific alterations or modifications of copyrighted work rather than an irrevocable blanket waiver, particularly if the author had no bargaining power when the waiver is granted.” See Sonia Baldia Intellectual Property in Global Sourcing: The Art of Transfer” 38 Georgetown Journal of International Law 499, Spring 2007 (Footnote 79) and Mira T Sundara Rajan Moral Rights in the Public Domain: Copyright Matters in the Works of Indian National Poet C Subramania Bharati 2001 SING. J. LEGAL STUD. 161, 175 (2001)

This raises a number of other issues – particularly, why permit (or not permit) waiver, and how does a provision of law such as under the VARA in the US affect the rights of young upcoming artists/authors? These issues and many others will be discussed in Part 2. In the mean time, we look forward to your questions and comments!