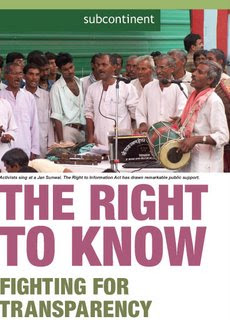 We wish to sincerely thank our readers and many others who supported us in our drive to increase transparency at the Indian Patent Office. Letters to the Prime Minister, Dr Manmohan Singh (and other Ministers and public functionaries involved with IP) were sent two weeks back, along with all your signatures.
We were pleasantly surprised at receiving support/signatures from unexpected quarters–folks that were interacting regularly with the patent office and ran the risk of attracting their ire. We salute their outstanding courage and wish to reiterate our commitment towards making the Indian patent office (and all other IP institutions in India) more transparent and accountable. Your courage inspires us to do much more in this regard and we thank you again for your overwhelming support.

The Mint and IPWatch covered our petition in excellent articles. These are reproduced below.

Most of our readers may be familiar with CH Unnikrishnan, the lead pharma writer for the”Mint“, a business daily that is setting new standards for journalism in India.

India’s leading journalist on IP issues, Unni has been relentlessly pushing for more transparency at the Indian patent office. His recent article on a patent opposition filed by Lawyers Collective caused a stir at the Indian Patent Office. Hoffman La Roche’s patent for Valganciclovir, a drug used to treat infections relating to HIV/AIDS, was opposed by Lawyers Collective and CIPLA, who requested a hearing in the matter.

The Controller in the Chennai office in charge of this matter did not grant a hearing–worse still, he never even bothered to respond to their plea for hearing. Rather, he went ahead and granted the patent. Unni’s article in Mint brought this serious lapse to public notice and the Controller General in Delhi immediately ordered an enquiry. For an insightful analysis of the merits of this patent opposition and the interpretation problems with priority dates and the TRIPS mandate under Art 70.8, see this IMAK article.

On the SpicyIP petition to increase transparency by creating a robust patent database, Unni writes as below:

PM URGED TO MAKE PATENT PROCESS BETTER “On the heels of serious criticism against red tape and lack of transparency in India’s patent offices, a group of industry representatives, patent experts, lawyers and patient groups, have written to Prime Minister Manmohan Singh urging his intervention in creating a system that will make information related to patents, their filings and grants public.

The letter, signed by about 150 people, has requested the Prime Minister to increase transparency and accountability at the Indian patent offices by creating an online database containing complete information on patent applications and grants, copies of patent office decisions, and patent examination details.

Right to Information: The letter to Prime Minister Manmohan Singh asks for an online database with information on patent applications and grants, copies of decisions, and patent examination details.

It has mentioned that such a database will conform with the mandate under the Right to Information Act to make such information available to the public.

“Currently there is no way one can access details on how the patent grant/rejection decisions are made at the patent offices in India,” said Oxford Intellectual Property Research Centre’s Shamnad Basheer, who led the campaign, adding the examination reports, file notings and comments made by patent officials should also be made public. “Such access is critical, as it promotes transparency and reduces the scope for corruption,” he said.

The Chennai patent office, for instance, has been in the news in recent weeks for an alleged violation of law to grant a patent to Swiss drug multinational F Hoffmann-La Roche Ltd for its anti-infection drug Valcyte, without hearing an opposition filed by a patient group.

The country’s drug controller is conducting an in-quiry into how the patent was granted.
In 2004, S.N. Maity, then controller general of patents in India, who granted the so-called exclusive marketing right to Swiss drug maker Novartis AG to sell its controversial drug Glivec in India, was removed from his job by the cabinet committee on appointments over allegations on irregularities in patent grant decisions.

The India patent system has made little progress in establishing a transparent database in the last decade.

“Though this work was initiated in 1996, there has not been any serious progress in this direction. Since such a resource is of tremendous value to all patent stakeholders inventors, industry, policymakers, civil society, academicians and more importantly the public, the government should even consider outsourcing this task to the private sector,” the group stated in its letter.”

IPWatch, a website that is clearly at the forefront of independent, accurate and insightful reporting on international IP issues, has been leading the battle for transparency in global IP issues. Kaitlin Mara’s well researched and comprehensive write up on the SpicyIP Petition is below:

“Two years after India’s implementation of international trade rules on intellectual property rights, a lawyers group is rekindling a decade-old push to organise India’s patent applications into an electronic database.

IP law blog (“blawg”) Spicy IP has sent a petition to the India Patent Office (IPO). Citing India’s status as an information technology leader and its emerging role as a patent “trendsetter” for the developing world, the petition calls on the IPO to “create a comprehensive database” of patents, including full specifications and claims. It also asked that the IPO to “upload patent office decisions,” which are currently confidential, in order to foster transparency and public accountability.

“You will be shocked to know,” says Shamnad Basheer, a research associate at Oxford University’s IP Research Centre who contributes to Spicy IP, “that the process of having a digitised database began in India sometime in the 1990s.” The UN Development Programme provided funding to the National Informatics Centre, a part of India’s Ministry of Information, to create an electronic patent database, Basheer said.

India’s implementation of the World Trade Organization Agreement on Trade-Related Aspects of Intellectual Property Rights (TRIPS) in 2005 introduced pharmaceutical patents to India, increasing the number of stakeholders in the patent system. These stakeholders need “timely information on patents,” according to the petition.

Without a database, searches for patent information become complicated, advocates say. Tahir Amin, a patent lawyer at the Initiative for Medicines, Access, and Knowledge (I-MAK), a non-profit organisation that evaluates the quality of pharmaceutical patents, said it took his team of five all of 2005 and early 2006 just “to identify the key ten to fifteen ARV [anti-retroviral] drug patents applications” I-MAK was planning on challenging. At the time, the only way to access information was to download copies of the IPO’s weekly journal, which are posted online, and search each individually. Amin acknowledged there were improvements in search mechanisms in the last year, but said that difficulty remains.

In November 2006, an independently run, free database called Big Patents India, was launched by Bhaven Sampat, a professor of economics at Columbia University’s Mailman School of Public Health, who converted the IPO journals listing post-TRIPS patent applications into an online, searchable format. While Sampat is planning to expand the database, Big Patents India does not have patent information prior to 2005, nor does it contain full patent specifications, which Sampat said are difficult to get in India.

The India Patent Office could not be reached for comment at the time of writing. India’s National Informatics Centre maintains a patent database, and there is a pay subscription service called Ekaswa, but according to Amin the information available is too limited to be of use.

It is possible to order a full-text patent from the IPO, but according to Amin it can take up to a month by correspondence, precious time when considering filing an opposition, he said, and showing up to the office in person can involve a wait of several hours.

Finding Prior Art
The difficulty finding India-specific patent claims is not a major barrier to determining freedom to operate, at least on pharmaceuticals, argued Washington, DC patent attorney Christopher Ohly. Most post-TRIPS patents filed in India would have been cross-filed at the US Patent and Trademark Office and/or the European Patent Office, both of which have full-text online databases, he said. However, he added, as India’s pharmaceutical industry, and thus the number of India-specific patents, continues to grow, it could become a concern.

More at issue, Ohly said, is determining prior art. Basheer notes that patent examiners are under time pressure; one he spoke to said he never bothered checking for patent applications unavailable online. This means “we could end up having a new patent for a technology that has already been patented in India years before,” Basheer said, just because the granted patent is India-specific and not online.

Ohly cautions that a database would not solve all problems involved with finding prior art, which is as often located in academic journals or industry publications as it is in prior patents.

A pharmaceutical industry spokesperson said that the level of financial flexibility at larger companies ameliorates some troubles faced by NGOs. Having access to proprietary patent databases, such as at Thomson Scientific and Chemical Abstracts, and the ability to hire a team of specialists to focus on locating prior art before submitting an application, makes the push for a free public database less important for industry than for public-interest nonprofits, the industry source said.

Does Lack of Transparency Hinder Use of Opposition Mechanism?
India’s patent law has particularly stringent rules on patentability, mandating that without significant efficiency improvements, “the mere discovery of a new form of a known substance … of any new property or new use for a known substance, or the mere use of a known process, machine or apparatus” does not constitute a patentable innovation (Patents Amendment [pdf]).

Because of this provision, a patent valid under US or European patent law might be invalid under India’s. Lack of readily available data hinders the opposition mechanism, Basheer said, adding, “In order to decide whether to oppose a patent, I need access to the complete specification, including ‘claims.'”

Since the TRIPS agreement went into effect, the IPO has published 37,000 patent applications and had only 66 oppositions filed (of these, 10 have been upheld, two rejected, and the rest await a decision), said Basheer, who believes that part of the reason for the low percentage of oppositions is the difficulty acquiring full patent specifications.

The industry source cautioned that it would be wrong to assume that patents on pharmaceuticals are bad, and emphasised that industry has a desire for quality, valid patents. Sampat said that the opposition mechanism helps ensure that quality; its goal “is not to oppose intellectual property but to bring third party expertise to bear on patents in order to nip bad patents in the bud.”

Of greater concern, according to Basheer, is the fact that the comments of India’s patent examiners and controllers are kept confidential. The US Patent and Trademark Office and the European Patent Office publish their examiners’ notes to allow stakeholders to “see what arguments or objections are raised or amendments” are added to an application, said Amin.

The IPO strongly opposes public release of examiners’ comments. Its Right to Information Act asserts that such notes will be made available only under court order.

Kaitlin Mara may be reached at [email protected]”