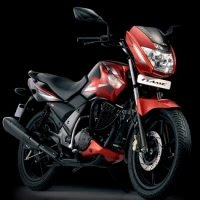 TVS Motors has shown why it still is the third largest two-wheeler manufacturer in the country. Not the one to lose heart and hope despite the injunction from the Madras High Court, TVS Motors relaunched its 125-cc motorcycle “Flame” on Monday with a single spark plug engine. The bike in its twin spark plug avatar was launched last December 13th (werent they triskaidekaphobic?) and lost the company a whopping Rs.100 crores this quarter alone. According to the Business Line, the Company’s Chairman and Managing Director, Mr.Venu Srinivasan, is confident of the bike raking in Rs.700 crores for the company in 2008-09 selling 15,000 units at Rs.46,000 a piece (ex-showroom) this March alone. Meanwhile, the company is going ahead with its appeal at the IPAB challenging the validity of the Bajaj patent.