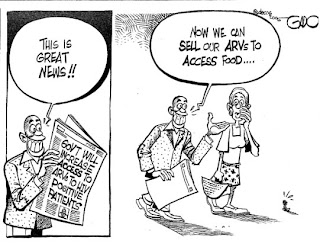 Mr. KS Jayaraman, Nature Correspondent, recently brought some interesting information to my attention: CIPLA has set up a manufacturing unit in Uganda and plans to set up another one in Morocco soon. While I haven’t found a news item corresponding to CIPLA’s plans for Morocco so far, I did find a news item from October last year, where the BBC reported that “Ugandan drugs importer Quality Chemicals will produce the medicines locally with Indian pharmaceutical company Cipla, one of the world’s largest producers of generic drugs. It hopes to sell them in Uganda and other African countries.” Readers would probably know that Uganda is one of the countries classified as a Least Developed Country (LDC) and therefore has time until 2016 to implement the obligations under the TRIPs Agreement. (For a list of LDC’s, see here). Reading this report, the first question that came into my mind was: Will Cipla now use the exemptions under the newly amended section 107A(b) of the Indian Patents Act to import the drugs it produces in Uganda, into India? If it does, India may well see itself dragged before the WTO Dispute Settlement body once again!

Section 107A(b) of India’s Patents Act (as amended by the Patents Amendment Act 2005) reads as follows:

107A Certain Acts not to be considered an infringement. – For the purposes of this Act, –

shall not be considered as a infringement of patent rights.

Before the 2005 Amendments, this sub-section read as follows:

(b) importation of patented products by any person from a person who is duly authorized by the patentee to sell or distribute the product.

As it stood earlier, the section was legalizing parallel importation under the principle of international exhaustion of patent rights. Replacing the words “by the patentee”, with the words “under the law” clearly broadens the scope of the section considerably (and that might actually be an understatement!). Under the amended section, products legally sold by any person in any country (with or without the consent or knowledge of the person holding a patent in India) may be imported into India, and such importation will not be considered an infringement of the exclusive rights conferred on the patentee under section 48 of the Patents Act. This may be problematic (from a TRIPs compliance perspective) for a number of reasons:

The TRIPs agreement neither prescribes nor proscribes the adoption by member states of the principle of domestic or international exhaustion. Article 6 states:

For the purposes of dispute settlement under this Agreement, subject to the provisions of Articles 3 [National treatment] and 4 [Most Favored Nation Treatment] nothing in this Agreement shall be used to address the issue of the exhaustion of intellectual property rights.

1. A patent shall confer on its owner the following exclusive rights:

(a) where the subject matter of a patent is a product, to prevent third parties not having the owner’s consent from the acts of: making, using, offering for sale, selling, or importing (6) for these purposes that product;

Footnote (6) to Article 28, clarifies that “This right [i.e. the right of importation], like all other rights conferred under this Agreement in respect of the use, sale, importation or other distribution of goods, is subject to the provisions of Article 6.”

It is necessary to note here that while TRIPs does not define the term exhaustion, the relevant literature (atleast in the literature that I have come across so for) states that for “exhaustion” to kick in, the patentee must authorize the first sale. The only choice given to member states in relation to exhaustion of patent rights is the choice of permitting or not permitting parallel importation (in other words, recognizing either the principle of domestic exhaustion or international exhaustion or neither).

For those of our readers who are new to this topic, here’s a brief explanation of the concepts: If a country follows the principle of domestic exhaustion, in order for a person other than the patentee to legitimately make a 2nd sale of a patented item, the first sale must have taken place within the geographical limits of the same country where the 2nd sale is being considered. There is therefore no possibility of “parallel importation” in a country that limits the operation of the principle of exhaustion to domestic exhaustion. (For example, the US does not permit parallel importation other than in very limited circumstances.)

On the other hand, under the principle of international exhaustion, if a patentee sells or authorizes the sale of patented products in Country A, any person is permitted to buy the patented goods from Country A and re-sell these in country B, whether or not the patentee has a patent in Country B. This is called parallel importation and it clearly and legitimately eats into the exclusive right of a patent holder to use, sell or import etc. the patented goods. The rationale for the principle of exhaustion is that with the first sale, the patentee has received his reward and he should not be allowed to profit twice by re-selling the same product. However, whether it be the principle of domestic or international exhaustion, the first sale must be authorized by the patentee.

In the light of this discussion, let us come back to S 107A(b): Under section 107A(b) drugs legally sold by a person X in any of the following countries may be legitimately imported into India by any person who buys these drugs from X in these countries:

What about the sale of patented drugs in countries (1) and (2) above (eg in LDCs like Uganda or in non-member states?) Can these be considered “sales authorized by the patentee?” This would be a more difficult argument to make.

The most interesting arguments would probably be in relation to sales of patented drugs in countries where the sale is “legal” as a result of the grant of a compulsory licenses (Country set (4) above). On the one hand, Article 31 (f) of the TRIPs agreement requires that “any such use [without authorization of the patentee] shall be authorized predominantly for the supply of the domestic market of the Member authorizing such use,” meaning that the compulsory license must be granted to meet the local demand and not for export outside the country granting compulsory license. On the other hand, strictly speaking, since the patentee does get a reasonable royalty on sales resulting from the grant of a compulsory license, the rights of the patentee are indeed “exhausted” and parallel importation ought, arguably, to be permitted.

As of now, I think the above questions/issues are moot. How long they will remain moot, is yet to be seen 😉 If any of our readers have information about CIPLA’s plans in other LDCs, or any parallel importation plans, we would love to know about it.